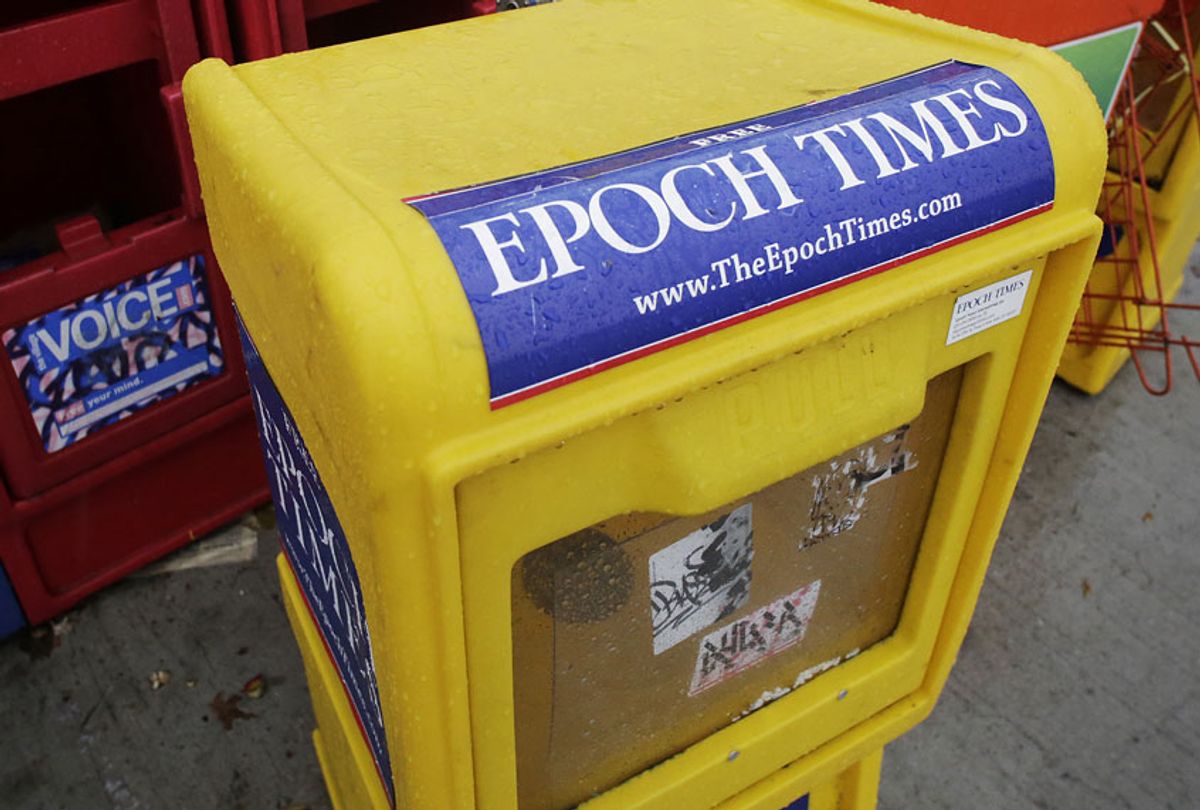 The Epoch Times, a conservative news outlet that has spent more money on pro-Trump ads than any group besides the president's  campaign, was banned from buying ads on Facebook after violating the platform's policies.

The Epoch Times, a nonprofit news outlet owned by members of Falun Gong, a religious group that has been called a "doomsday cult," has spent around $2 million on pro-Trump Facebook ads. It has now been banned from purchasing new ads after trying to obfuscate its connection to the ads, which promoted Trump and spread conspiracy theories about his opponents, NBC News reported.

"Over the past year we removed accounts associated with the Epoch Times for violating our ad policies, including trying to get around our review systems," a Facebook spokesperson told the outlet. "We acted on additional accounts today and they are no longer able to advertise with us."

The Epoch Times in recent months began to use generic pages like “Honest Paper” and “Pure American Journalism” to buy the ads, violating Facebook policies that require sponsors to be clearly identified.

The Epoch Times is operated by members of Falun Gong, a Chinese spiritual group that “believes in a coming judgment day that will send communists to hell and says Trump is helping accelerate that timeline,” a recent NBC News investigation found.

Though the Epoch Times began as a nonprofit newspaper to spread the Falun Gong message, it has seen its revenues more than double and its online reach surpass every other news organization since 2016. Much of its growth was fueled by the $1.5 million it spent on more than 11,000 pro-Trump Facebook ads over the last year.

The progressive nonprofit ACRONYM highlighted the outlet’s Facebook spending in May and Popular Info’s Judd Legum detailed how many of these ads violated Facebook’s policies. Along with pro-Trump ads, many ads pushed conspiracy theories about the “deep state” and “fake news” media.

After the reporting, the Epoch Times stopped running any ads on its official accounts in July. Instead, the group began using generic pages like “Patriots of America” and “Best News” to buy more than $450,000 worth of ads in 30 days.

While the ads were previously marked as being paid for by the Epoch Times, the ads now say they were paid by front groups like "Chronicle Media" or "MarketFuel Subscription Services."

Epoch Times publisher Stephen Gregory denied that this was done to “obfuscate” the connection to the Epoch Times despite Facebook’s ban. “We have no reason to believe this is due to the content of the ads, since these were all approved by Facebook,” Gregory said, despite Facebook specifically noting that they violated the ad policies.

Republican strategist Brendan Steinhauser told NBC News that he helped advise the Epoch Times on how to appeal to conservatives and denied that there was anything wrong with how the paper sought to hide its connection to the ads after the first round of news reports. Steinhauser, an early Tea Party star who worked as  campaign manager for Sen. John Cornyn, R-Texas, told NBC that he even introduced the group behind the Epoch Times to organizers of the Conservative Political Action Conference (CPAC) and arranged for them to interview dozens of Republican lawmakers.

The Epoch Times interviewed Trump’s daughter-in-law Lara Trump earlier this year, and members of the Trump campaign have written articles for the site. Some of its articles have been shared on social media by Donald Trump Jr.

But while it has made inroads into mainstream conservative circles, the Epoch Times continues to push conspiracy theories. The site has posted anti-vaccine propaganda, pushed the QAnon conspiracy theory, and amplified Trump’s baseless “Spygate” claims against former President Obama.

“It is so rabidly pro-Trump,” former Epoch Times writer Ben Hurley told NBC, adding that the Falun Gong practitioners “believe that Trump was sent by heaven to destroy the Communist Party.”