Smart Watch: Why is there yet another season of "13 Reasons Why"?

Plus: Why do women kill? And why oh why is the MTV VMAs still handing out the Michael Jackson Video Vanguard Award? 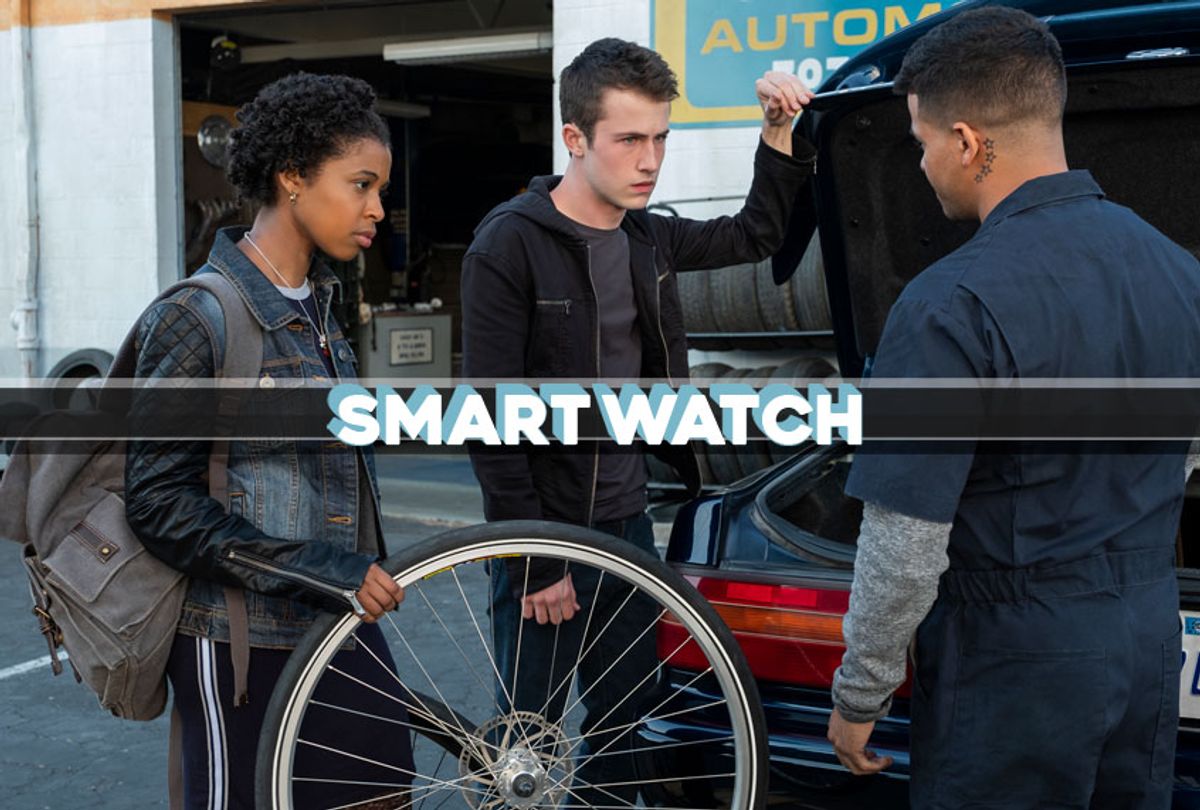 Questions, questions. Life is full of ‘em, most don’t have answers. Television brims with “whys” and “hows” and “whats” never responded to. Equally as frustrating are the ones that do reply with an answer that isn’t as satisfying as the original question.

Drop into the third season of “13 Reasons Why” to get a sense of what we’re talking about. Netflix’s drama originated as an adaptation of a 2007 novel by Jay Asher that told the full story of a lonely lovely teenage girl named Hannah Baker (Katherine Langford), who seemed introverted and withdrawn from her school’s social scene save for Clay Jensen (Dylan Minnette), one of those guys who isn’t quite in the in-crowd at Liberty High but doesn’t draw unwanted attention, either.

Hannah, on the other hand, enjoyed the flattering attention the new girls at school sometimes get, which quickly flipped over into extreme bullying that escalated into sexual assault, followed by her suicide. The title originates from the season 1 conceit in which Hannah circulated a series of cassette tapes she recorded before she died, listing the 13 people who drove her to kill herself and telling the story of how and why she feels each played a part in her death.

When the series premiered in 2017 people were still under the impression that certain series originally conceived as one-and-done efforts were devoted to exist as singular works of art. That was before “13 Reasons Why” became a social media sensation that thrilled kids and horrified parents. When the market declares a demand, count on an entertainment company to meet it with … 13 More Reasons Why.

Season 2 substituted Polaroids for cassettes (what is it with these kids and their obsession with obsolete technology?) and changed the question from a matter of whether Hannah was a reliable narrator to whether the predatory kids leading the bullying pack, namely Liberty High sports hero Bryce Walker (Justin Prentice), would ever be brought to justice for committing multiple sexual assaults.

Bryce is a wealthy son of one of the town’s most powerful men, and that season came out in the midst of #MeToo and in wake of the rape trial of former Stanford swimmer Brock Turner, whose father famously pleaded with the judge to not punish his son with "a steep price” for “20 minutes of action" and was très sad that he would not be able to enjoy his "big ribeye steak" like he used to.

You can’t make up stuff like that, but showrunner Brian Yorkey could and did use it as inspiration for how Bryce was treated by the local justice system. But that narrative arc could not match the power of the first. Neither could a subplot that culminated in a kid bringing a gun to a school dance, only to be thwarted by a few of his friends. The second season failed to adequately justify its existence, in other words.

However it did end with unresolved threads, the main one being whether Netflix would be content with allowing a controversial and narratively problematic but highly popular series come to a close with its bad guy having gotten away with his crimes scot-free. The existence of season 3 and the trailer announcing it says nope — and, in fact, leads by identifying a new unexplained death, that of Bryce Walker.

Now the hook is even more basic than tapes and instant photos. It’s just your basic whodunnit. Could it be Justin (Brandon Flynn)? Jessica (Alisha Boe) who pressed rape charges to no avail? Is it Tony (Christian Navarro) or Alex (Miles Heizer) or Tyler (Devin Druid), the kid who brought a gun to Spring Fling?

Television series must evolve to stay interesting, but it is telling that a drama predicated on an unusual storytelling angle chose strip back to basics, mostly for the sake of staying alive. But what originally made “13 Reasons Why” interesting is its exploration of survivor's guilt and psychological culpability. Hannah Baker died by her own hand, and was clearly a mentally unstable young woman, but the drama also asks us to gauge the ways we fail one another not merely by our actions but our inaction and inadequacies.

Parents and mental health professionals take issue with the series, and especially the original inclusion of Hannah’s graphically depicted suicide. Series writer Nic Sheff explained why the shows producers left it in, but as time passed Netflix decided to remove the scene from the first season.

Honestly though, for a series like this to keep going — which it will for one more season after this — simplifying is probably the best way to go. There are only so many nostalgic devices a show can drum up to keep the story on the rails, but the murder-mystery that works backwards has reeled in humans for many a decade. But one is right to wonder which reasons the producers might dream up for the final season are enticing enough to show up.

Between “Dateline,” Investigation Discovery, Oxygen and Lifetime’s movies, the small screen isn’t wanting for tales of murderous women. But if you’re wondering what’s missing this series gives the answer by asking, why so serious?

“Why Women Kill” is from Marc Cherry, whose comeback hit “Desperate Housewives” premiered 15 years ago this September. The media has lacked for the same level of cheek ever since, something a person might not have realized they missed until they get a peek at this series — which is basically the same show with a fashionable structural update.

“Desperate Housewives” achieved lift-off by drawing us into the relatable life stories of its four protagonists, who live in the same neighborhood and share the same interest in figuring out why their friend killed herself. “Why Woman Kill” opens with a similar concept, and the promise of a payoff in the title.

The drama’s action takes place in one elegant, huge Pasadena home occupied by three different couples across a trio of eras. In 1963 we meet prim and proper Beth Ann (Ginnifer Goodwin), a woman who exists to serve her husband Rob (Sam Jaeger). She’s the mirror opposite of Taylor (Kirby Howell-Baptiste), the home’s 2019 occupant and an in-demand attorney, making her the main breadwinner in her marriage to screenwriter husband Eli (Reid Scott).

Sandwiched in the house’s middle history is Simone (Lucy Liu), a 1984 socialite who takes behavioral cues from the “Dynasty” playbook. Simone obsessed with opulence and status, an unspoken bit of irony given her husband Karl’s (Jack Davenport) status-endangering secret. Beth Ann also discovers that Rob is hiding something, while Taylor and Eli hide nothing from one another. Their problem is relaxing rules they set in place to maintain their heretofore healthy unconventional relationship.

As the title and Roy Lichtenstein-inspired opening credits hint, each of these women will somehow get blood on their hands before the season ends, although by the end of the premiere episode it’s not clear whether it will be someone else’s or their own. They aren’t the drama’s only women, and none is entirely innocent.

Cherry’s signatures are all over “Why Women Kill,” from the situational set-ups to the trademark double-entendres and venomous banter to the multi-faceted and fraught relationships that women have with one another.

Obviously Cherry’s styled these characters after drag burlesque performances – especially Liu, whose character’s makeup is bright and thick enough to be viewed from orbit. The whole shebang is a work of technicolor noir.

As yet, however, “Why Women Kill” feels more comfortably familiar than recycled or old. There’s never a question of why we should care about any of these characters. Cherry and the performers make us care about all of their fates, even that of uptight, prissy Beth Ann and shallow, self-centered Simone.  Goodwin and Liu may be camping up their performances, but they also take care to grant them enough humanity for the viewer to invest in what happens to each, or in what they do.

Howell-Baptiste is also wonderful, although she purposefully makes Taylor harder to read than her co-stars’ women. In part that may be due to the unpredictable dynamic between the messy Eli and Taylor and their unexpected houseguest Jade (Alexandra Daddario), who loves to clean and cook and is generally a dream girl … which means she’s probably too good to be true and might eventually murder them in their sleep.

All these reasons and others best left to being revealed by watching “Why Women Kill” tempt a viewer to remain on the ride to find out how many answers exist to the title’s question. And even if the reply disappoints, so far there’s a lot to enjoy as we mull over the main question and the cascade of follow-ups to that first “why.”

Some queries have no satisfying answer, however. Take this one: If an artist had a groundbreaking impact on an entire form, does his contribution outweigh the gravity of the crimes he allegedly committed? And what’s the right way for an institution to reconcile itself with continuing to honor said innovator despite the severity of the accusations against him, involving crimes for which he was never convicted by our legal system.

This is a long way of saying that MTV is damned whether it removes Michael Jackson’s name from its Video Vanguard Award or keeps it in place. Jackson’s faithful are a rabidly devoted group; Jackson’s family has a web of influence throughout the music industry; Jackson’s music is integrated into American culture on a level that few other musicians or acts can claim to match.

This also is the year that “Leaving Neverland” blew apart any illusions we had or bargaining we may have engaged in about Jackson’s rumored and alleged pedophilia. Two victims came forward and went on record with accounts about their relationships with Jackson, both including detailed and similar allegations of how he groomed them and manipulated them and their families into keeping quiet about it.

The answer of what MTV should do with its lifetime achievement honor should be simple: the prize used to be called Video Vanguard Award , and multiple recipients, including David Bowie and the Beatles, accepted it as such between 1984 and 1991, when the channel renamed it to honor Jackson.  It would lose nothing to quietly refer to it thusly henceforth. And yet, what network is in the mood to create such an attention-diverting stink, especially for an awards show airing  days before what would have been Jackson's 61st birthday?

But it does make a person wonder whether MTV will continue to hang a tainted legacy around the neck of its signature career of achievement honor. Elliott might not have a problem with her name being associated with Michael Jackson, but some future honoree very likely will. Then what?