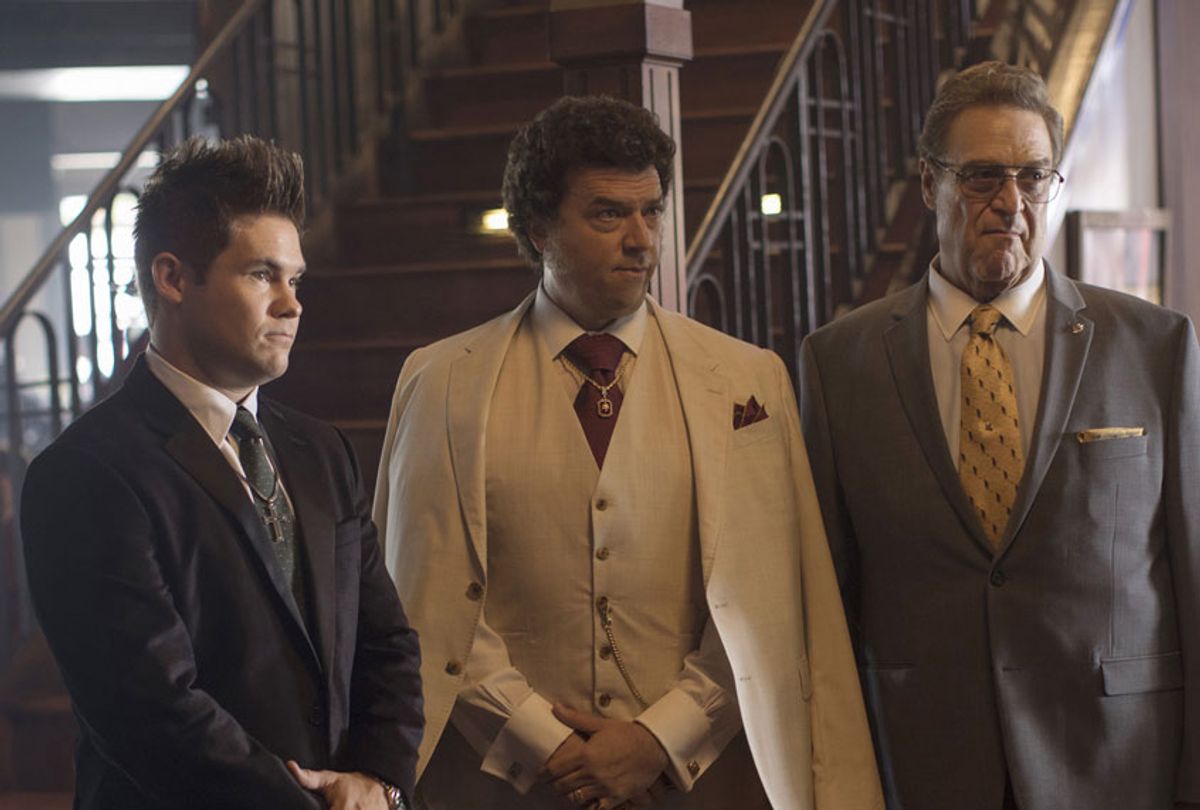 “Good afternoon, Jesus,” Jesse Gemstone prays, his hands folded. “Thank you for watching after my family and myself. Thank you for letting me be born into this world as a Gemstone. The legacy of my family carries immense weight."

He pauses for a breath, then chuckles. “But I take it you are no stranger to that.”

This moment is a short but telling one. As Jesse (Danny McBride) prays, a montage of what his family is doing at the moment flashes by.

His youngest — and potentially closeted — brother, Kevin (Adam Devine) is mid-benchpress, letting out a guttural moan as he hands the barbell off to a shirtless spotter in cut off shorts. His sister Judy (Edi Patterson) is attempting to have sex with her live-in fiancé, who finishes before she even has his pants off. His father Eli (John Goodman) is face-to-face with a live snake in his kitchen; he catches it with one bare hand, squeezing its neck between his thumb and forefinger.

These are the Gemstones, a dynastic family of Texas televangelist preachers who are each attempting to squelch scandal at their megachurch or outrun their demons, most of which are born out of their own hypocrisy.

McBride, who is also the show’s creator, has a history of crafting and playing characters who simultaneously overestimate their place in the world while irresponsibly wielding whatever power they do have. These characters are most often objectively terrible people, like Kenny Powers, the self-destructive former MLB pitcher from “Eastbound & Down,” and the delusional, ambition-fueled Neal Gamby of “Vice Principals.” They aren’t ever totally despicable — McBride leaves enough soft edges to ensure that — and often there are moments where they’re completely sympathetic, especially nearing their respective series’ conclusions.

In a way, the Gemstones story is timeless. From King David onward, there have been men who are purportedly chosen by God, revered by the masses for their holiness and whose morals disappoint when they aren’t behind the pulpit. Erase the show’s references to streaming services and smartphones, and this family could easily be a stand-in for Jim and Tammy Faye Bakker, a husband-and-wife televangelism duo whose show, the PTL Club (short for “Praise the Lord”) became embroiled in financial and sexual scandals in the 1980s.

After decades of watching men like Benny Hinn, with his spiritual cryptocurrency gospel of “If you donate to me, God will bless you with riches,” and holy roller Pat Robinson of “The 700 Club,” seeing McBride skewer the Gemstones for their greed, flashiness and lewdness is immensely satisfying.

But the show’s timelessness is also a weak point.

Earlier this month, the Washington Post’s Elizabeth Bruenig wrote a deeply reported and revealing essay about why evangelicals in Texas are so immensely supportive of Donald Trump, the “thrice-wed, dirty-talking, sex-scandal-plagued businessman [who] actually managed to win the steadfast moral support of America’s values voters.”

There’s no one answer, Bruenig wrote, but there did seem to be a unifying desire to push back against liberals and the causes they champion — like gay marriage, LGBTQ rights and access to abortion — that directly contradict evangelicals' spiritual values and worldview. Trump is not a particularly holy man, but he is aggressive enough to lead the charge and happy to court those votes, and many evangelical leaders are falling into line. In 2016, megachurch pastors including Robert Jeffress, Jack Graham and Robert Morris joined the president’s evangelical advisory board as spiritual counselors.

Since Trump became president, several prominent conservative leaders have used Biblical language to describe his ascension, likening him to King David and a "vessel" anointed by God, or even, in the case of one radio commentator, "The King of Israel" and "the second coming of God."

This week, as Salon's Amanda Marcotte reported, Trump has embraced this; he referred to himself  as"the Chosen One" in response to a question about trade dealings with China.

"Trump is channeling — and in the first instance, directly quoting — the beliefs of evangelical conservatives, a powerful constituency that still holds enormous sway within the Republican Party," Marcotte wrote. "And those folks are telling Trump, regularly and in grandiose terms, that he is in fact the Chosen One and has been anointed by God to be the president at this point in time."

And so while some of the mechanics may be the same — illicit sex, hidden funds, sin behind closed doors — religious hypocrisy in 2019 looks very different than it did for the televangelists of 1989. It’s more public and political; a reality that is also illustrated by the recent #ChurchToo sexual abuse scandals, the news of former megachurch pastor and Christian author Joshua Harris leaving the church and apologizing for his hurtful teachings, and the newly-released Netflix documentary series “The Family,” which attempts to shine light upon and untangle the points in contemporary American politics where church and state became synonymous.

In Bruenig’s piece, aptly titled “In God’s country,” she interviews both pastors and congregants about how they reconcile Trump’s morals with their own. It’s clear they have a strong sense of who their God is, how they interpret his teachings and fit into his plans.

This illuminates another potential shortcoming in “The Righteous Gemstones.” Other than brief snippets — at least in the first four episodes of six made available to critics — we don’t know what the pastors preach from the pulpit; we don’t know who their congregants are, what they want out of their relationship with God, and even how they’d feel if their pastors proved to be hypocrites.

And while I already hear the cries of “Not everything has to be political!” to craft a satire about a modern-day Texas megachurch without even a passing nod to the current sociopolitical context renders “The Righteous Gemstones” a comedy of family foibles. One that is tight, bizarre and has some ace comedic timing, but one where so far any prayer of incisive commentary on evangelicalism in Trump’s America seemed to be deliberately left unanswered.