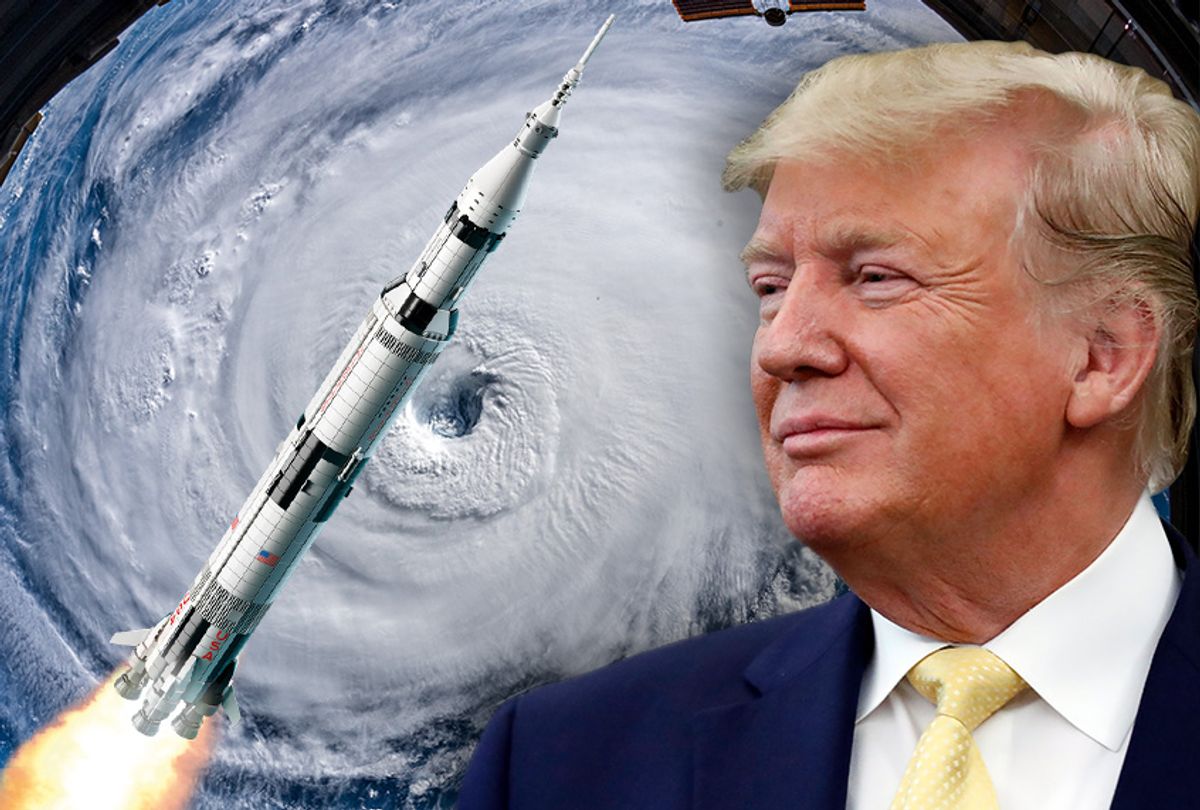 The "debate" over whether Donald Trump has a diagnosable psychological condition that renders him unfit for office never truly dies down. It's been heating up in the past couple of weeks, in response to our president acting even more like a raving nutcase than usual.

On Sunday, Axios reported that Trump "has suggested multiple times to senior Homeland Security and national security officials that they explore using nuclear bombs to stop hurricanes from hitting the United States." The report came complete with gaslighting comments from an anonymous "senior administration official" claiming that this is just a matter of a president "who’s willing to ask tough questions," instead of what is obviously going on, which is that Trump is a clunkhead who is so mentally cobbled that he has no idea how stupid he sounds. (A tweet, published on Trump's account but mostly likely written by White House assistant Dan Scavino, denied the reports.)

"Are members of the news media tiptoeing around obvious questions about Trump's instability?" Brian Stelter of CNN wrote Monday morning, pointing out that Trump's erratic, dishonest and combative behavior, long out of control, has been escalating.

Stelter's piece addresses what is admittedly a real conundrum for journalists. On one hand, it's screamingly obvious there is something deeply wrong with Donald Trump. On the other hand, there's "an understandable aversion to diagnosing a person — any person — based on what's only visible on television and Twitter."

The truth, however, is that we do know a lot about Trump's behavior, since he's a whirling dervish of narcissism who provides an endless stream of observable information and witnesses. Psychologists who follow the news closely probably have more information about Trump than they do about most patients they diagnosis after an in-person consultation. His symptoms are abundant and inarguably point toward a major personality disorder. For instance, Trump checks off every single item on the sociopathy checklist, and has done so for the decades since he pushed himself into the public spotlight.

Some psychologists are comfortable pointing this out. Retired Harvard clinical psychiatrist Dr. Lance Dodes classified Trump as "an extremely successful sociopath" on MSNBC, referring to research showing that sociopathy is more common than many think in people who have executive roles in business.

Others, such as Dr. Allen Frances, a former chair of psychiatry at Duke University, continue to argue that this discussion only serves to stigmatize people with mental health conditions, most of whom are not raving monsters set on destroying the country in order to bolster their own egos.

"Calling Trump crazy hides the fact that we’re crazy for having elected him," Frances argued to Stelter on CNN.

Frances' comments point to the larger problem with this endless debate: Whether Trump is actually a diagnosable sociopath or whether he's just providing an Oscar-worthy multi-decade performance for the cameras may not really be a meaningful distinction. What matters is that so many Americans are willing — and even eager — to vote for someone who acts this way.

Trump's approval ratings never drop much below 40%. He got nearly 46% of the vote — less than Hillary Clinton did, but enough to win a majority in the Electoral College. A huge percentage of Republicans, who have disproportionate representation, are fully aware that Trump is a vile person in every way, and are not only fine with it, but actually seem to like him better because of that. for it. After all, putting a racist, misogynist ignoramus who appears to have no regard for any other person than himself in the highest office in the land is triggering the liberals, big-time. And making liberals cry is the central organizing principle of the modern American right.

Trump will never to sit down for a psychological evaluation that produces an official diagnosis. So, in a sense, this discussion will never leave the realm of the hypothetical. But it's hard to imagine that receiving a formal diagnosis of anti-social personality disorder or some other condition that explains Trump's psychology would, at this point, make much of a dent with his supporters.

Trump and his supporters would likely greet a formal diagnosis in the same way they greet every news item that makes it clear that the man is tetched: Deny, deflect, defend.

We see this strategy in full force around the story of Trump suggesting that the government should nuke hurricanes. Trump, or Scavino anyway, went on Twitter to deny it as "FAKE NEWS." A White House source tried to deflect the issue by quibbling with Axios over exactly what kind of bombs Trump had in mind. And of course there was the shameless effort of the anonymous official to argue that Trump asking about nuking hurricanes was evidence of his strong, fearless leadership.

Trump's fans already know he's a confessed sexual predator and compulsive adulterer, and many of them have created elaborate justifications for why that makes him more, not less, qualified to be president. If the fact that someone is a sexual predator who has been credibly accused of rape isn't a deal-breaker, than a formal diagnosis of a serious mental-health condition is unlikely to make a difference. It'll just be dismissed as fake news, quibbled to death (Fox News would probably have a segment about how the technical term is "anti-social personality disorder," not "sociopathy"), and even defended as a good thing. Kellyanne Conway would definitely tell reporters that it's just another sign that the president has the ruthlessness necessary to get the job done.

The cause of Trump's behavior — whether he is actually a sociopath or just so pampered and privileged that he acts like one — is ultimately not the real issue here. Even after he's out of office (10 or 14 years from now, ha ha) we still have the problem that 40% of the American electorate country eagerly supported a man whose entire personality could be described as "unfit." They did so for the ugliest possible reasons: Racism, sexism and a willingness to end democracy rather than share power with people who look different or come from different backgrounds. Even if we could get a diagnosis for Trump, what do we do about all the people who love him?