"I am now 86 years old, yet people of all ages want to take their picture with me — amazing," she told the crowd 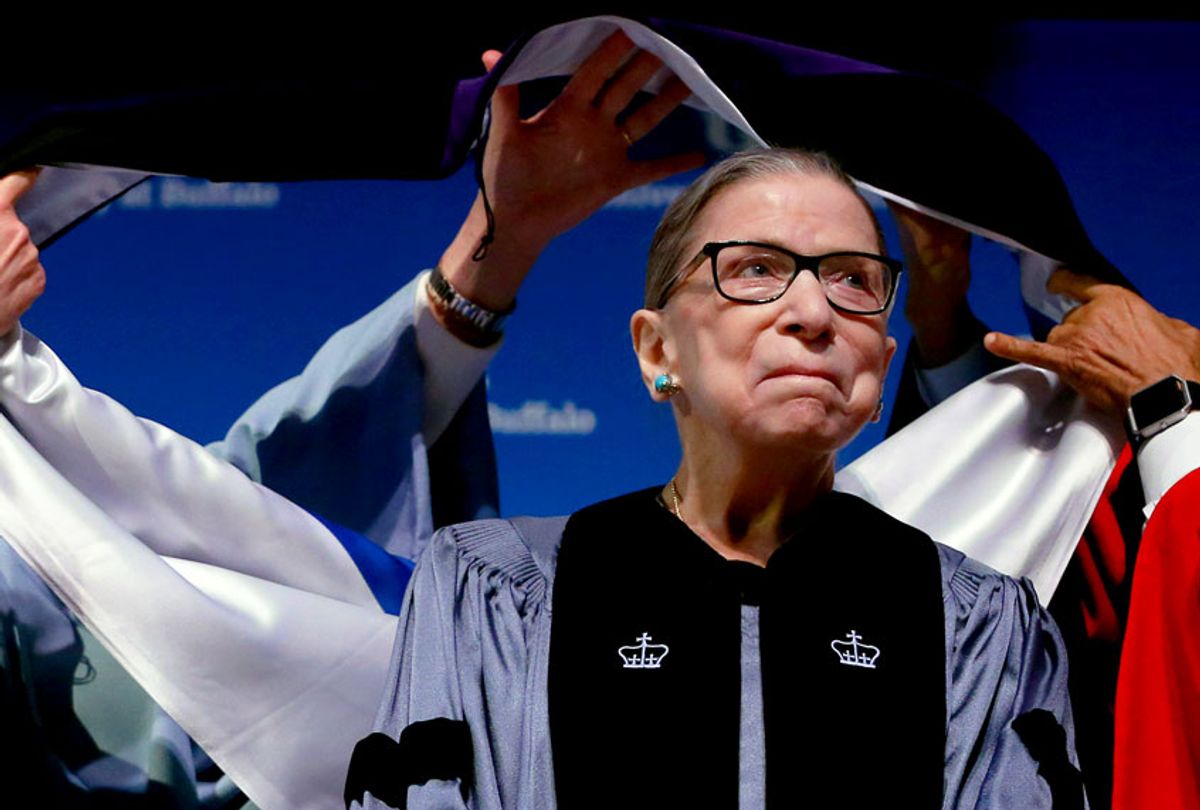 Supreme Court Justice Ruth Bader Ginsburg appeared strong and even cheerful Monday as she made her first public appearance since completing radiation treatment for her latest bout with cancer.

The 86-year-old justice accepted an honorary law degree from the University at Buffalo School of Law in the morning and commanded a packed performing arts hall in the evening, just days after she completed three weeks of treatment for a malignant tumor on her pancreas.

She was escorted across the stage but spoke with a clear, strong voice at both events about her legacy in pursuing the rights of women, her friendship with the late Justice Antonin Scalia and her late-in-life fame as the "Notorious RBG," a nickname which she has earned from her withering dissents on the court.

"I am now 86 years old, yet people of all ages want to take their picture with me — amazing," she said in a speech accepting the degree, prompting laughter and applause from the audience.

If she is notorious, Ginsburg continued, "it is because I had the good fortune to be alive and a lawyer" in the ’60s and '70s. That is when "it became possible to urge before courts, successfully, that equal justice under law required all arms of government to regard women as persons equal in stature to men."

In her conversation with Aviva Abramovsky, the first female dean of the University at Buffalo's law school, Ginsburg reflected on her own legacy in the fight for gender equality. She also criticized the bitter partisanship that has come to describe the nation's politics.

"I hope one day there will be people who care about our country — both Democrats and Republicans — who will come together and say enough of this dysfunctional legislature," she said. "We're supposed to serve the people of the United States."

Her visit drew widespread attention, likely because of recent news of her latest health issue.

Ginsburg's health has been the subject of widespread public concern and speculation given the court's conservative majority, which stands at 5-4. An inability to serve could provide President Donald Trump with a chance to nominate his third conservative pick for the bench and shift the court further to the right. Trump nominated Justices Neil Gorsuch in 2017 and Brett Kavanaugh in 2018.

The Supreme Court said in a statement Friday that Ginsburg underwent a three-week stereotactic ablative radiation therapy at the Memorial Sloan Kettering Cancer Center in New York City after doctors discovered a "localized cancerous tumor" on her pancreas on July 31.

"The tumor was treated definitively and there is no evidence of disease elsewhere in the body," the court's spokeswoman said in a statement. "Justice Ginsburg will continue to have periodic blood tests and scans. No further treatment is needed at the time."

It was the latest cancer scare for the court's oldest member and leader of its liberal wing. She has suffered a number of health setbacks in recent months, including a fall that fractured three ribs in November followed by a surgery to remove two cancerous nodules from her left lung. She missed oral arguments in January for the first time since she was confirmed to the court in 1993.

Ginsburg is already a two-time cancer survivor. She was diagnosed with colon cancer in 1999 and pancreatic cancer in 2009.

Ginsburg has made clear in speeches and in an interview last month that her work on the court remains in full swing, and she has no plans to retire anytime soon. She penned three of the highest court's 13 decisions last term and has hired clerks for the term extending into 2020.

Ginsburg briefly referenced her health in her speech, recalling that her longtime friend Wayne Wisbaum, a Buffalo attorney who died in December, had urged her last year to give a talk in the city.

"In July 2018, Wayne wrote to me that his health disabled him from playing a lead role in the arrangements for my visit here but he still hoped to attend all the events. He asked me to confirm that I would come to Buffalo in August 2019 in any event,” Ginsburg said. “I did so immediately and I did not withdraw when my own health problems presented challenges.”

She said it was "both a joy and a sorrow" to appear at an event organized by a friend from her college years at Cornell University who passed away last year.