Scaramucci says Trump "may not have early stage dementia, but he has full-blown early stage fascism" 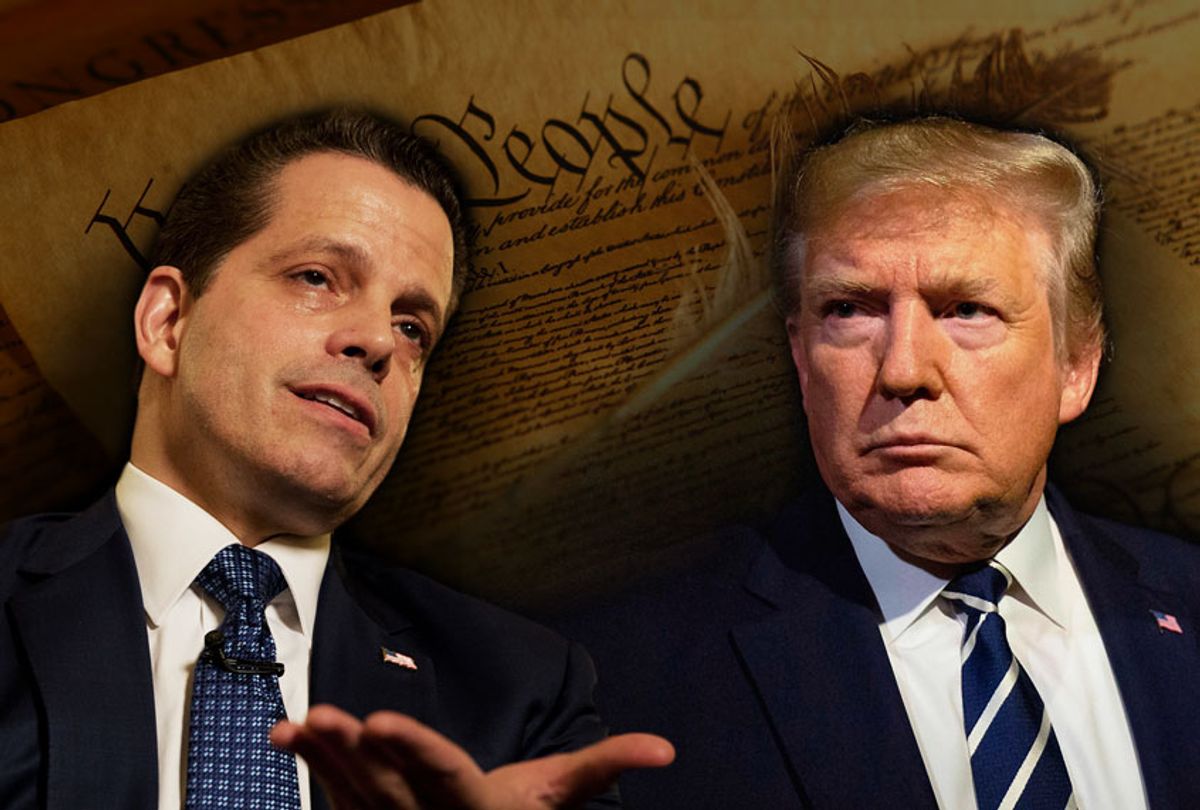 After disagreeing with CNN host Chris Cuomo's description of him as a "Never Trumper," Scaramucci explained Monday why he believes the president should be removed from office.

"If you were on the board of a company, and you had a CEO acting this erratic — and literally in a gigantic meltdown like I was describing to John Berman, it's like a Chernobyl situation — you would have to replace that CEO," Scaramucci said. "He's running the free world, and he's the leader of the greatest longstanding republican democracy . . ."

After Cuomo asked Scaramucci to ignore labels and instead focus on responding to Trump's defenders, the short-lived White House staffer insisted there are serious concerns about Trump's mental fitness.

"He has gone past the bounds of normalcy on so many different things, but the No. 1 thing — and the breaking point for me — was the full-on racism," Scaramucci told Cuomo. "And so, I know I'm not going to use that and debate whether or not he's a racist. But when you send out the racist tweets, and you're piling on and you're standing there in El Paso with your finger up in the air like this in that detached way, it's a sign that he's gone full-blown crazy."

Of Trump, he added that while the president "may not have early stage dementia, but he has full-blown early stage fascism."

Scaramucci expressed similar thoughts to radio host Bill Press, an opinion contributor for the Hill, when asked if he agreed with conservative lawyer George Conway that people need to start questioning the president's mental fitness.

"It has to really make you worry about the state of the country and the overall cowardice of leadership," he continued.

Scaramucci announced Monday that he plans to form a coalition of former Trump staffers to oppose the president's re-election bid and replace him with a more mentally stable alternative in 2020.

"This is not a 'Never Trump' situation. This is not just screeching rhetoric. This is — OK, the guy's unstable. Everyone inside knows it. Everyone outside knows it. Let's see if we can find a viable alternative," he told CNN at the time. "Moreover, I've got to get some former Cabinet officials in unity to speak up about it. They know it's a crisis."

Scaramucci had told Salon back in October that had he been retained as the president's communications director, he would have advocated for a more bipartisan strategy than the one that the president has used up to this point.

"The right question is, how long do you think you could have lasted implementing your plans?" Scaramucci explained. "The answer is that would have been up to the president. If the president liked my ideas of opening up to places like Salon, opening up like to places like CNN. Remember my press conference was 40 minutes, but I very purposefully looked for CNN. Sean Spicer, having called on them for six weeks. I went to go look for them to send an olive branch, and so my saying would have been 'We’re open for business.'"

He added, "I believe in the 1st Amendment. I believe that people are that are in power have to be held accountable, because power is corrupt. That’s what our founders felt. Opening up the press box, opening the lights, turning the cameras back on, and I would have told the president, 'You’re a television star. You’ve been 15 years in a very highly rated television show. There’s people out there that don’t like you, but you should go and meet with them.' Even if he says, well, they’re not going to give me a fair shake, so what?"