Omar to Alabama GOP: If you want to “clean up politics," don't nominate an “accused child molester" 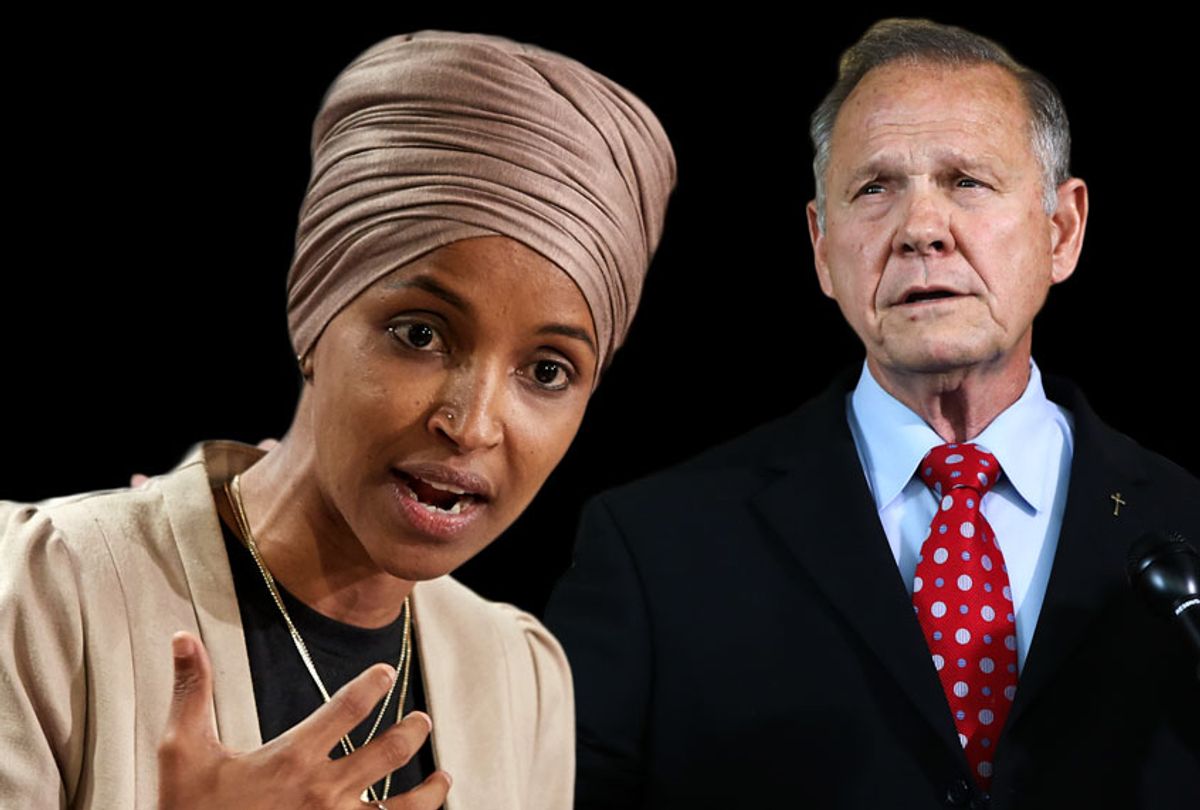 Rep. Ilhan Omar, D-Minn., swiped back at the Alabama Republican Party, who has advocated for her expulsion from Congress, by pointing out that the group had nominated an “accused child molester” as its candidate for a special U.S. Senate election in 2017.

"Sorry, @ALGOPHQ, but this is a representative democracy. I was elected with 78% of the vote by the people of Minnesota's 5th District, not the Alabama Republican Party. If you want to clean up politics, maybe don’t nominate an accused child molester as your Senate candidate?" Omar wrote Tuesday on Twitter.

Over the weekend, the Alabama Republican Party approved a resolution urging Omar's expulsion, according to an article from the Hill cited by the congresswoman in her tweet.

The resolution itself accused Omar of having "engaged in rhetoric that explicitly runs counter to American values and patriotism by falsely accusing U.S. armed forces of committing war crimes while on mission to liberate her home country of Somalia"; of having "dismissed the 9/11 terror attacks waged by radical Islam on the World Trade Center by stating "some people did something"; of having "sympathized with a convicted terrorist and member of the Islamic State oflraq and Syria by advocating a U.S. District Judge for sentencing leniency"; and of having "a disturbing record of using anti-Semitic language that includes alleging Jewish money is used to buy American influence regarding its policy toward Israel; Rep. Omar is also a supporter of the anti-Israel Boycott, Divestment, and Sanctions campaign."

Omar has been the target of considerable hostility from Republicans, including bigoted remarks by President Donald Trump himself. Last month, he refused to stop demonstrators at one of his rallies from chanting "send her back" — a reference to Omar’s place of birth.

The Minnesota legislator responded at the time on Twitter by saying, "I am where I belong, at the people’s house and you’re just gonna have to deal!"

Earlier that month, Trump infamously tweeted that the members of the so-called "squad" — the group of four progressive congresswomen of color that includes Omar and Reps. Alexandria Ocasio-Cortez of New York, Ayanna Pressley of Massachusetts and Rashida Tlaib of Michigan — should "go back" to their supposed countries of origin. Of the four, only Omar was born outside of the U.S. And although she was born in Somalia, Omar is an American citizen.

"So interesting to see 'Progressive' Democrat Congresswomen, who originally came from countries whose governments are a complete and total catastrophe, the worst, most corrupt and inept anywhere in the world (if they even have a functioning government at all), now loudly and viciously telling the people of the United States, the greatest and most powerful Nation on earth, how our government is to be run," Trump tweeted. "Why don’t they go back and help fix the totally broken and crime infested places from which they came. Then come back and show us how it is done. These places need your help badly, you can’t leave fast enough. I’m sure that Nancy Pelosi would be very happy to quickly work out free travel arrangements!"