After ignoring climate at G7, Trump gets back to work killing the planet 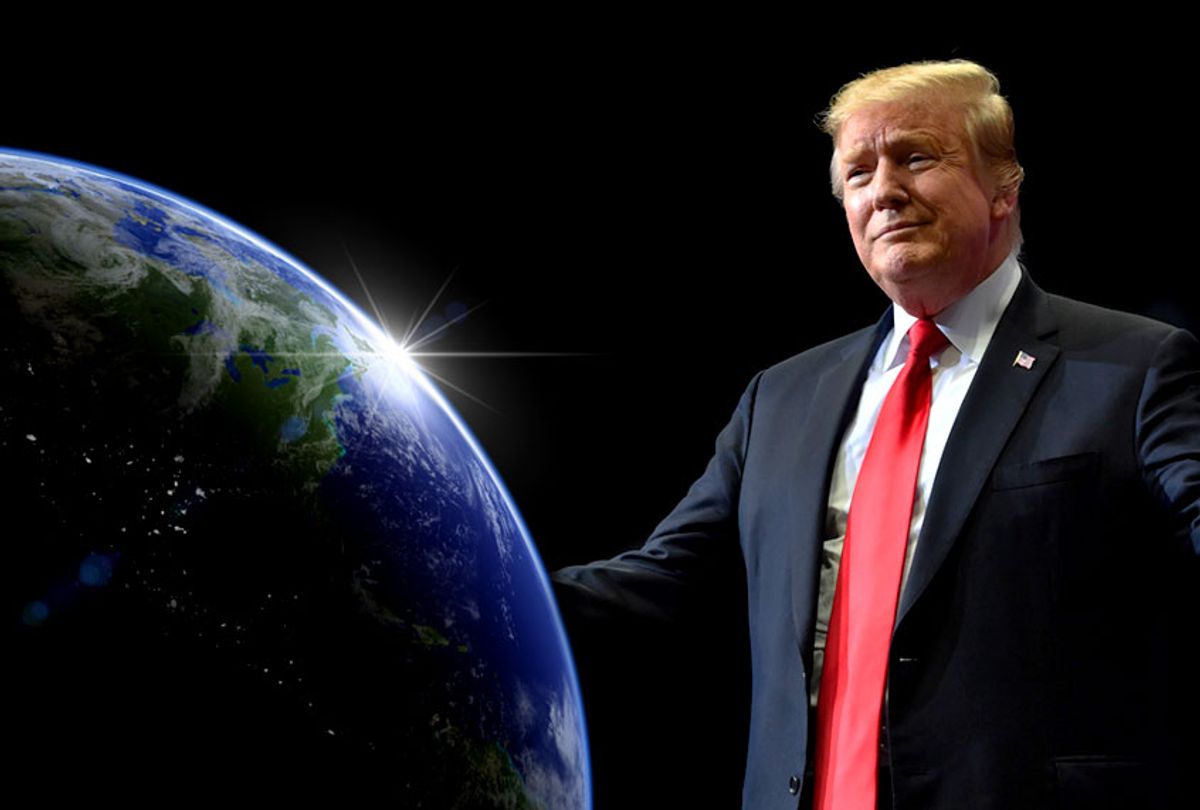 President Trump made a show of opposing his fellow G7 leaders on climate change and Russia. Now back in the United States, Trump is doubling down by helping the Kremlin and gutting greenhouse gas regulations.

Trump spent much of his time at the G7 summit in Biarritz, France, complaining to other leaders that Russian President Vladimir Putin should be allowed back into the group. He even suggested he may invite the Moscow pariah when the United States hosts the next summit. Russia was kicked out of the G7 after it invaded and annexed Crimea from Ukraine.

“I think it would be better to have Russia inside the tent than outside the tent," Trump said at a news conference after claiming that Putin had “outsmarted” former President Obama by invading the Ukrainian territory.

Days after Trump returned to the U.S., a senior administration official told Politico that Trump blocked a $250 million military aid package to Ukraine, which the outlet noted was “critical to keeping Russia at bay.”

The official said that Trump asked his national security team to delay and review the funding “in order to ensure the money was being used in the best interest of the United States,” Politico reported, even though the money was allocated by Congress.

“We are aware of an [Office of Management and Budget] hold on funding for the Ukraine Security Assistance Initiative,” a House Appropriations Committee spokesperson told Politico. “We have serious concerns about a freeze on these important appropriated funds, and we are urgently inquiring with the administration about why they are holding up these resources.”

The review comes after the administration pushed to cut billions in aid to numerous countries but former Director of National Intelligence James Clapper told CNN that this particular move would be a “gift to Russia.”

Rep. Tom Malinowski, D-N.J., who sits on the House Foreign Affairs Committee, told Politico that Trump’s move would have “at least a temporary effect.”

"The bigger problem is that Trump is once again showing himself to be an asset to Russia,” he added.

But that was not the only move Trump made after returning stateside. After skipping the G7’s climate meeting and arguing that oil “wealth” trumps any environmental concerns, the Environmental Protection Agency announced that it would gut federal regulation of methane, a greenhouse gas linked to climate change.

The proposed rule would reverse Obama-era standards requiring oil and gas companies to inspect and prevent methane leaks in drilling wells, pipelines, and storage facilities, The Wall Street Journal reported, and suggests that the federal government does not have the authority to regulate methane.

According to EPA data, methane makes up more than 10 percent of all greenhouse gas emissions in the U.S., with about half of that coming from emissions generated by oil and gas companies.

The Trump administration estimated that gutting the rules would save the oil and gas industry at least $17 million per year.

Kassie Siegel, who heads the advocacy group Climate Law Institute at the Center for Biological Diversity, told The Washington Post that the rollback shows “complete contempt for our climate.”

“The Obama rule was like a Band-Aid on a gaping wound,” she said said. “The Trump administration is so fanatical that they couldn’t even live with the Band-Aid. They had to rip off the Band-Aid.”

Environmental advocates likened the move to Brazilian President Jair Bolsonaro opening up the Amazon to logging interests, leading to an alarming increase in rainforest wildfires.

"President Trump's attack on the Tongass National Forest is like the fires burning in the Amazon — it's a huge threat to a major climate change buffer and to lands and wildlife that have global significance," Eric Jorgensen, the managing attorney for the Alaska-based advocacy group Earthjustice told Newsweek.

Its old growth trees are the greatest carbon sanctuary in the U.S. national forests, helping us all as a counterweight against climate change. This ecologically rich landscape and all the benefits it brings will be lost if roads and chainsaws are allowed to carve it up. There is no good reason to roll back protections for the Tongass.

Meanwhile, Trump, who skipped the G7’s meeting on the Amazon fires, came out against the $22 million aid package other G7 leaders offered Brazil to fight the fires.

White House National Security Council spokesman Garret Marquit said in a statement that Trump “did not agree to a joint G7 initiative that failed to include consultations with President Bolsonaro.”

Instead, Trump took to Twitter to praise Bolsonaro after he rejected the G7’s aid.

“He is working very hard on the Amazon fires and in all respects doing a great job for the people of Brazil — Not easy,” Trump wrote. “He and his country have the full and complete support of the USA!”