Climate skeptics don't have science, morality or simple decency on their side — so they're leaning into sexism 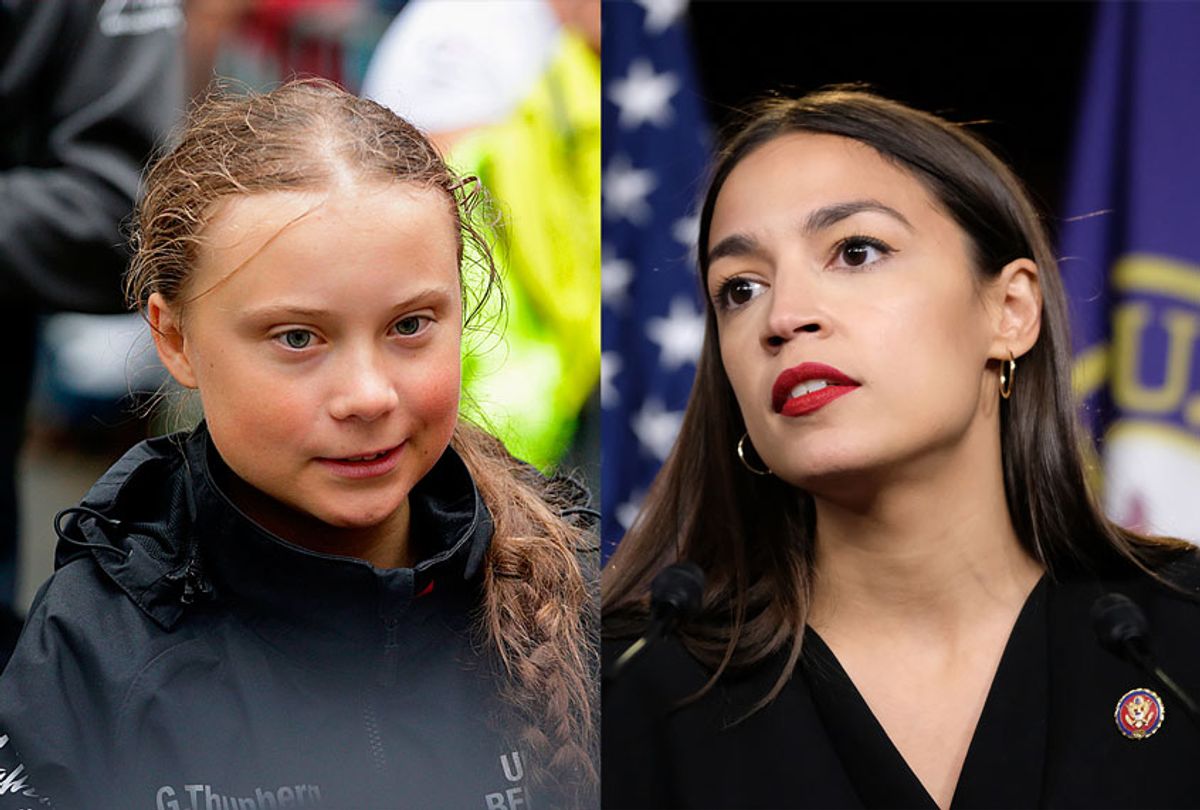 Climate change may not seem like a gendered issue, but leave it to conservatives to inject sexism into everything they do.

That much was made evident on Thursday, when the right-wing Media Research Center tweeted out a video of Rep. Alexandria Ocasio-Cortez, D-N.Y., talking about the need for rapid decarbonization to prevent catastrophic environmental changes due to climate change. The video is labeled "Shallow Thoughts" and treacly music is played behind it, in order to indicate how viewers are meant to read this video, which is as an indictment of Ocasio-Cortez's intelligence.

Despite the heavy-handed presentation, if a viewer actually listens to what Ocasio-Cortez is saying, it's quite clear she's making a cogent and intelligent case, and understands the actual scientific evidence far better than her detractors.

It's equally clear that Media Research Center doesn't expect its conservative audience to actually listen to what she's saying. Instead, sexist stereotypes are doing the heavy lifting here. Ocasio-Cortez is young, female and pretty, and as such, the target audience for this video is predisposed  to think of her as a bimbo, and is ready to write off anything she says as dumb lady yapping, without bothering to absorb the actual contents of her speech.

Ocasio-Cortez, always good at using social media, seized on this gap between the sexist assumptions of conservatives and the reality of her actual intelligence, and tweeted out the video herself.

Earlier this week, Ocasio-Cortez tweeted out a warm welcome to Greta Thunberg, the 16-year-old Swedish climate activist, who arrived in New York Wednesday for a speech at the United Nations.

Unfortunately, Thunberg was also greeted by a wave of misogynist nastiness, largely coming from allegedly grown men in both Europe and the United States. The attacks on Thunberg were in the same vein as those on Ocasio-Cortez, accusing her of being too stupid to know what she's talking about and denying that her voice is one worth honoring. A writer for the conservative Washington Examiner claimed that Thunberg is a victim of "child abuse" and that her mother "pimps their kid out," explicitly drawing a line between forced sex work and climate activism.

These kinds attacks have no basis in fact. Thunberg's views on climate change align with those of better than 97% of climate scientists. Thunberg is no helpless puppet, but a sharp and remarkably passionate young person who has sparked an international youth movement of climate activism with millions of participants. In order to give weight to these attacks, these critics rely on stereotypes painting women, especially young women, as infantile and idiotic. Without this kind of misogyny, they'd have nothing.

"While these examples might feel like mere coincidence to some,"  Martin Gelin at the New Republic argues, "the idea that white men would lead the attacks on Greta Thunberg is consistent with a growing body of research linking gender reactionaries to climate-denialism."

Indeed, the evidence Gelin cites shows that sexism is probably fueling climate denialism. Researchers Jonas Anshelm and Martin Hultman of Chalmers found that sexists saw climate change activism as part of a larger group of social changes — including feminism — that threatens "a certain kind of modern industrial society built and dominated by their form of masculinity."

Other research shows that American men find environmentalism to be inherently feminine and therefore emasculating, and view being deliberately anti-environmental as a way to feel more masculine.

There's another reason that climate-change denialists so readily turn to sexism: They don't really have anything else to work with.

The scientific evidence is overwhelmingly clear: The climate crisis is real, and mostly caused by human activity. Morally, the position of denialists is indefensible, because their chosen path — to do nothing or worse yet, increase greenhouse gas output — will harm not just future generations, but ordinary people around the world who currently suffering from increasingly extreme weather events.

So conservatives have to rely on personal attacks aimed at environmental activists, dragging the debate away from any actual issues of substance and into a cesspool of culture war resentments. By targeting young female activists or political leaders with sexist stereotypes, climate denialists can distract from both the scientific facts and from the moral imperative to do something. Instead, they trying to make the whole issue be a proxy war the fragile egos of male conservatives, eager to lash out at any woman who makes them feel small by being smart and capable.

To be certain, it's not just women who have been targeted with these tactics. For a long time, former Vice President Al Gore, who was the strongest and earliest advocate for fighting climate change during his time in Congress, was a regular target of ad hominem attacks from climate denialists looking for any reason to talk about something other than science and morality. They'd call him fat. They'd call him crazy. They'd suggest he was just making it up to get attention.

But those attacks on Gore, it's worth noting, all involved feminizing him to some degree. Which is to say that "fat," "attention whore" and "crazy" are all standard ways for sexists to dismiss the opinions of women. The ur-attack on Gore, going back to the '80s, has been to call him effeminate.

Maureen Dowd of the New York Times was a particular fan of this line of attack, writing lines like, "Al Gore is so feminized and diversified and ecologically correct, he's practically lactating."

Having cast Gore in the role of a woman, it was easy for right-wingers to lean heavily on sexist stereotypes to dismiss Gore's serious, evidence-based and morally urgent crusade to do something about climate change before it's too late. Now they're shifting those same attacks onto actual women who are increasingly becoming the face of climate change activism.

But no matter who the right attacks, the premise remains the same: Environmentalists are female and/or effeminate, and therefore can be dismissed out of hand as stupid or crazy or driven by irrational emotion — in other words, not worth listening to. Women are so worthless in their eyes, it appears, that no amount of evidence will ever make women's arguments hold merit.