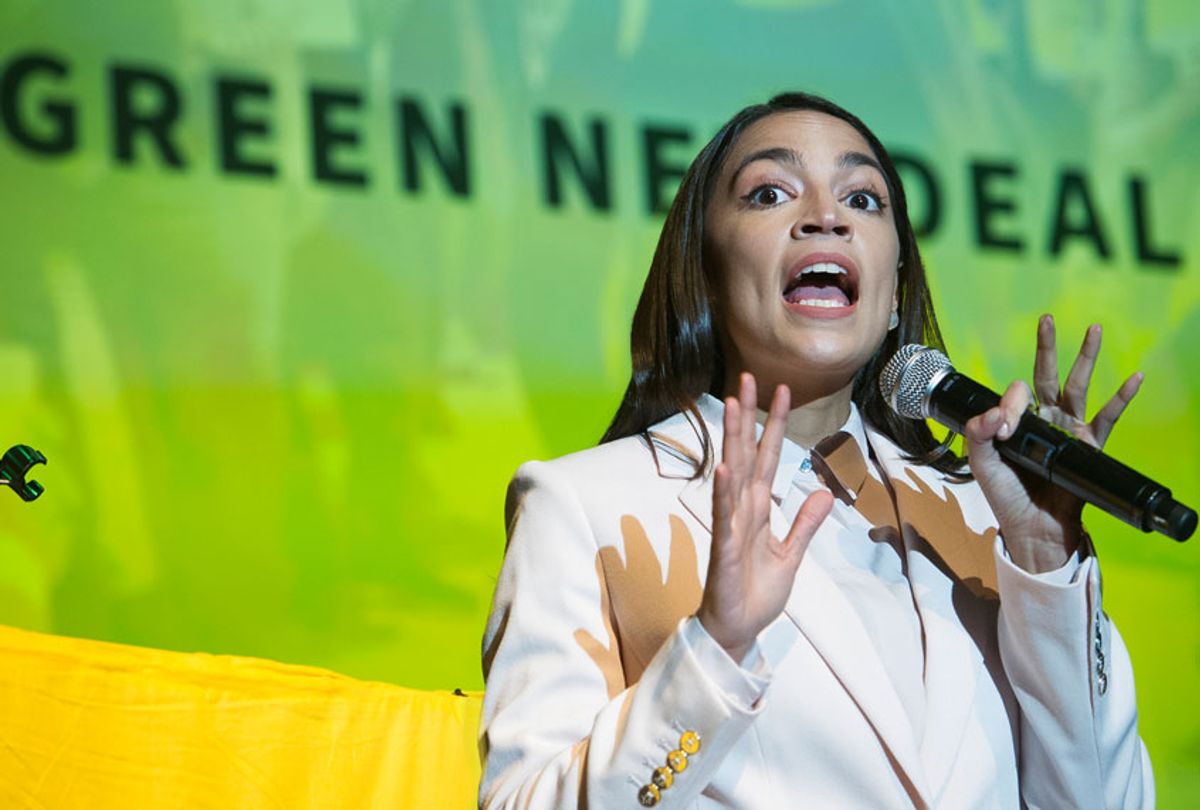 Just as the 1930s constituted the New Deal Era, the 2020s may very well end up being the Green New Deal Era. Problem is, many Americans have a lot of trouble believing a large-scale public works project comparable to the original is possible — perhaps due to decades of negative right-wing rhetoric that has painted government public works projects as impossible or "socialism." Sen. Marco Rubio (R-Fl.), for instance, derided the Green New Deal as "a publicity stunt designed to pander to a progressive base seeking to repackage socialism that will do nothing to address the actual problems Americans face every day."

For the skeptics (like Rubio) out there who paint such a policy as a mere publicity stunt, we spoke to an economist to get the scoop. How realistic is a Green New Deal? And is it mere "pandering," as Rubio claims?

For background, the term "Green New Deal" is a direct reference to the New Deal programs passed by President Franklin D. Roosevelt in the 1930s. Its underlying premise is that, just as Americans from that era needed to combat the Great Depression through active and creative government involvement in the economy, so too do Americans today need to simultaneously fight global warming, income inequality and other forms of social injustice through proactive, progressive legislation.

In the past, Salon has turned to politicians who have pioneered the policy outlines of a Green New Deal (GND) for answers, foremost among them Gov. Jay Inslee of Washington (a Democrat who until recently was one of the 2020 presidential candidates). To get into the nitty-gritty of GND, Salon spoke with Mitchell Green, who has a Ph.D. in Economics from the University of Missouri at Kansas City and works as an energy economist in the public utility sector in the Pacific Northwest. He also teaches introductory courses in economics at Portland Community College, is a research scholar with the Global Institute for Sustainable Prosperity and is a charter member of the Modern Money Network.

I'd like to start by asking a common skeptical question: How are we going to pay for a Green New Deal?

Oh boy, you're asking a tough question. I come from a tradition in macroeconomics that turns the sort of spending problem on its head a little bit. I'm sure you've heard of modern monetary theory, and I would say that if we want to do a Green New Deal, what we're basically committing to is a legislative overhaul and a re-articulation of our priorities, and reconfiguration of our institutions.

So to pay for something like that would require congressional commitment to authorize the spending, to go out to procure the resources and make our society cleaner and greener.

I think what, typically people are asking for, is "Okay, who are you going to tax to pay for it?" And I say that's sort of a tertiary question. I think the federal government, United States has the ability to basically spend without limits, subject to resource availability and the financing within that can follow that.

That does make sense. So, I guess the next question then is, what happens to people who work in coal mines? Is that something where they will lose their jobs if the Green New Deal is implemented?

Yeah, I would make the argument that thinking about the just transition aspects of the Green New Deal needs to be forefront. We have to center workers in something like this. So coal mining needs to go away, right? But good paying union jobs don't need to go away. So I think that if you're displaced as a function of making a rapid transition to a renewable energy economy, part of that package or that Green New Deal needs to provide a jobs guarantee for folks who are displaced against no fault of their own in a sort of organized labor sector with the basic benefits package and have like a sort of retraining program, a pathway to provide those workers high paying jobs in the clean energy–type sector.

What would a Green New Deal do in terms of ordinary people's lives? If a person who has a 9 to 5 job that wouldn't be directly impacted by this sector were to live in a post–Green New Deal society, what would that look like for them?

So let's just think about a day in the life of an average person in a city. A post-Green New Deal experience would have going to work on public transit or by walking or bicycling because we've made investments in walkable transportation-oriented cities. Not engaging in fossil fuel extraction, of course, but engaging in a labor process that produces sustainable commodities. In the community, those individuals might enjoy public utilities that are largely subsidized at federal expense. So that way the brunt of the rate impacts of a rapid transition to renewables is not born wholly upon rate-payers and participating in things like a community-oriented provisioning system like Victory Gardens, neighborhood organizing and the like.

Well, I'm not [on the ground with the current policy paradigm ,so if you're looking for a response from someone who's actively crafting all this, probably not going to get a satisfactory answer from me. But I can tell you what an ideal vision of that would look like. If the United States is going to commit to a Green New Deal, suppose the planets are aligned and we can pull this off - since we are one of the largest producers of these emissions, then the first step should be to stop the damage, right? Move away from using coal-fired or thermal-based generating units towards renewable electric generation, investment in a transmission grid that can handle this across the continent. Take away the source of much of the emissions as well as the demand for those emissions worldwide.

But a Green New Deal should also be committed to sort of mobilizing, you know, an army of workers to do afforestation, watershed deviation and a host of activities that make qualitative and targeted improvements in places that we have already done damage, but I think those have to be part and parcel to each other. So I don't think it's a one-off policy thing that you achieve. I think you have to commit to a regime of this for the long haul for a lot of the work to be done.

Okay. So my next question then is what would be the major policy initiatives of a Green New Deal program? Which kinds of policies do we hear getting discussed most often?

So we would need the jobs guarantee to guarantee anyone who wants to participate in the labor process a pathway to engaging in planting of forests, that sort of ecological remediation as just sort of a standing pool of labor ready to work for making a cleaner environment. Aside from that, we also need very directed public spending in creating a modern grid that can handle the very different types of renewable resources that we have purchased for the country. And that should be publicly owned. So I'm sort of tipping my hat at the Bernie [Sanders] plan that was recently released this week that calls for significant ownership stake on the part of the public in power generating and transmission capabilities.

I would say it should also have a much more active regulatory role in ensuring that any sort of a cost pressure that happens because of this doesn't get sort of easily passed on to end-use utility consumers, that person A can sort of mitigate that. I think immigration policy needs to be connected to climate policy. Like if we're gonna do not just preventative stuff, but also mitigation, we should be having a conversation about more a relaxed stance on our borders and taking in climate refugees and talking about how we can have sort of an adjusting culture where we're all kind of participating in that mitigation effort together.

So if a Green New Deal isn't [passed], what would the consequences be both ecologically and economically?

If it is not passed? To put it bluntly, I think that we're staring down a "Mad Max" situation here. You know, not to be alarmist, but I do think that our current institutions are not equipped to deal with the scarcity that will emerge due to higher average temperatures, a loss of traditional, arable land, mass migration due to climate refugees, common property value increases or depression and just an upending of the sort of status quo, however bad it's been, given that current scarcity mindset results in very bad outcomes for most people. I think the rich will have a fine time, like they always do. But I think that for most of us we'll be facing very mean and scarce conditions. So I tend to... When you ask me "How do you pay for it, how much does it cost?" I tend to to say, "Look, what is the cost to the economy if it does not? What are the economic costs of having to face legitimate scarcity, several generations until we're all dead?"

Do you think any of the Democratic presidential candidates have offered policy packages that are sufficiently comprehensive to address these problems?

I think the closest is Bernie Sanders, but I would like to see a stronger statement. Well, let me put it this way. I would like the Sanders team to distance itself from the "pay-for" questions, a little bit more from "pay for." They've trotted out the plan as saying it pays for itself and that we don't need to raise rates by selling electricity beyond a certain year. The plan was justified by showing it is generating some revenue and I think that is a potentially a misstep. I think you want to just come out and say, "Look, this is the public's money. These are the public's resources.... The Green New Deal is really just a statement, a last ditch effort shot to try to do something, mitigate the worst parts of this and we don't need to be thinking about how it could be paid for financially. We just need to do it."