Trump campaign's brilliant new tactic: Whining about media bias, as the right has for years

Going back to Nixon and Newt, conservatives have excelled at "working the refs." And it's always effective 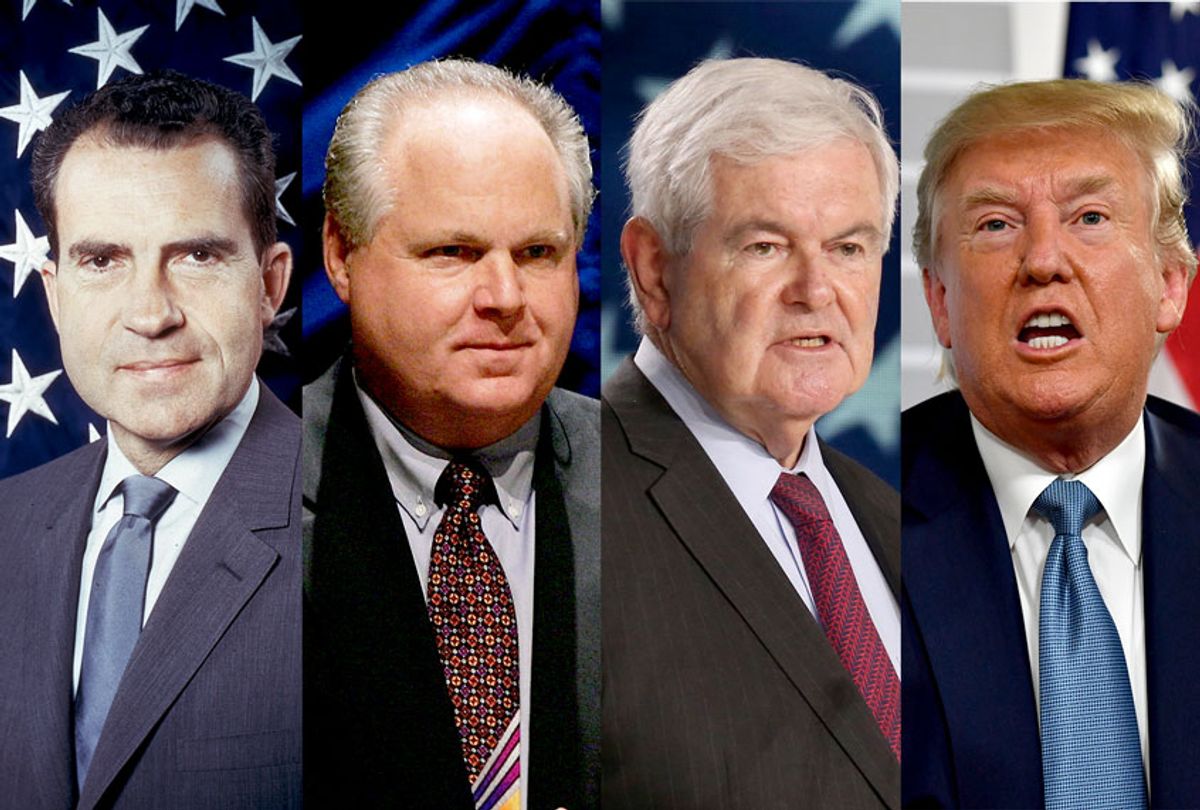 It looks as though the Donald Trump's 2020 campaign is gearing up to be quite the exceptional grift. It's unknown how much money Trump himself plans to make off all of it, but we do know that he has always thought running for president would be an excellent money-making opportunity. Way back in 2000, he told Fortune Magazine, “It’s very possible that I could be the first presidential candidate to run and make money on it."

As it happens, it's not likely that his unorthodox 2016 campaign ended up netting him a profit, despite his efforts to flow as much money as possible to his hotels, clubs and private airplane. Since he was running as a self-financed candidate, he ended up spending more of his own money than he took in.

Last week multiple news organizations reported that Trump campaign manager Brad Parscale appears to have an unusual business agreement that's providing him massive compensation compared to any other presidential campaigns. One assumes that Trump is aware of all this money flowing to Pascale. If he isn't, there's likely to be hell to pay. He doesn't like his people making money off the Trump brand if he's not getting his taste.

Parscale started off as the Trump organization's webmaster and was promoted to digital director of the Trump campaign in 2016. That would be the only political experience he's ever had, which may explain why the campaign would think this is a novel strategy, as Axios reports:

Look for ads, speeches and sustained attacks on Facebook and Twitter in particular, the sources say. The irony: The social platforms are created and staffed largely by liberals — but often used most effectively in politics by conservatives, the data shows. Trump successfully turned the vast majority of his supporters against traditional media, and he hopes to do the same against the social media companies.

Republicans' internal data shows it stirs up the base like few other topics. "In the same way we've seen trust in legacy media organizations deteriorate over the past year, there are similarities with social media companies," a top Republican operative involved in the effort told me. ...

How tech execs see it: They know the escalation is coming, so they are cranking up outreach to leading conservatives and trying to push hard on data showing that conservative voices often outperform liberal ones.

Kvetching and complaining are hallmarks of the Trump era, with the president excelling in his leadership role of whiner-in-chief. Hardly a day goes by that he doesn't throw a tantrum on social media about how unfair everyone is to him. So this strategy fits the Trump campaign nicely.

But let's not pretend that it's original. Sure, targeting social media is new, but only because social media itself is new. Conservatives have been hectoring the media for decades and they've been very successful at manipulating the press into second-guessing itself, at the least — and becoming outright biased at worst. Either way, this tactic convinces the media to put the focus right where Republicans want it: on angry, conservative white, men who are sure that everyone else is getting something for nothing while they do all the work. For the last four decades that has translated into the media twisting itself into pretzels to ensure that those voices are elevated above everyone else's.

It's true that Trump has taken this to previously unimaginable levels, calling the press "the enemy of the people" and publicly insulting reporters to their faces. But going back to the 1950s, the conservative movement has seen the utility of running against the media, which they portray as pointy-headed elites who have no understanding of the salt-of-the-earth American Everyman. National Review's William F. Buckley famously referred to "the delinquencies of the Liberal press," as right-wingers of the era recoiled at mainstream newsmen like Edward R. Murrow who called out anti-Communist extremism.

But it was President Richard Nixon, predictably, who raised it to an art form. The man who conceded his race for California governor in 1962 by saying to the press, "You won't have Nixon to kick around anymore," told his henchman H.R. Haldeman that “the press and TV don’t change their attitude and approach unless you hurt them." He was convinced that conservatives had to create their own media to counter it.

Nixon couldn't have guessed how successful that effort would be over the next 25 years. By 1995, as FAIR.org documented, conservatives had created a full-blown propaganda machine turbocharged by right-wing talk radio. One year later Fox News was founded, followed in a couple of years by internet phenomena like the Drudge Report. Politicians and talking heads led by former House Speaker Newt Gingrich offered up a full set of propaganda tools, including specific lists of words to use to describe the opposition.

Working in tandem with a long-term project to degrade the word "liberal," they continued to assail the press as "the liberal media."  As Eric Alterman wrote in his 2003 book, "What Liberal Media? ", the right had perfected the strategy of the endless whine, combined with what its advocates themselves called "working the refs":

Rich Bond, then chair of the Republican Party, complained during the 1992 election, "I think we know who the media want to win this election — and I don’t think it’s George Bush.” The very same Rich Bond, however, also noted during the very same election, “There is some strategy to it [bashing the ‘liberal’ media] … . If you watch any great coach, what they try to do is ‘work the refs.’ Maybe the ref will cut you a little slack on the next one.”

It has worked over and over and over again. After the 2004 election, for instance, the New York Times was moved to create a "conservative" beat despite years of rapt attention paid to various iterations of that faction such as "NASCAR dads" and "soccer moms." Later in the decade, the Tea Party became a national obsession and I'm sure we all enjoyed the two solid years of reporters making pilgrimages to "Trump country" to report back on every change in the mood of the all-important Real Americans who put him in office.

Most recently, we've seen the painful contortions of the New York Times as it responds to the relentless bombardment of insults and charges by the president and the right-wing media by bending over backward to be "fair and balanced."

So as you can see, Trump's allegedly brilliant and extremely expensive campaign strategy is not new at all. Sure, Parscale and company may have succeeded in getting the tech giants to "crank up the outreach to leading conservatives" but their phony complaints have nothing to do with actual bias, and they know it.  Any effort to "push hard on data showing that conservative voices often outperform liberal ones" is a waste of breath.

This strategy will probably be very successful. It usually is. Right-wingers can be highly intimidating. But if Trump thinks he's paying top dollar for some kind of innovation, he should watch his wallet. His crack team is doing nothing different than what conservatives have been doing since he was in grade school.