Alabama Gov. Kay Ivey says she is "not going to resign" over blackface scandal: "Heavens no"

"It’s something that happened 52 years ago, and I’m not that person. My administration stands on being inclusive" 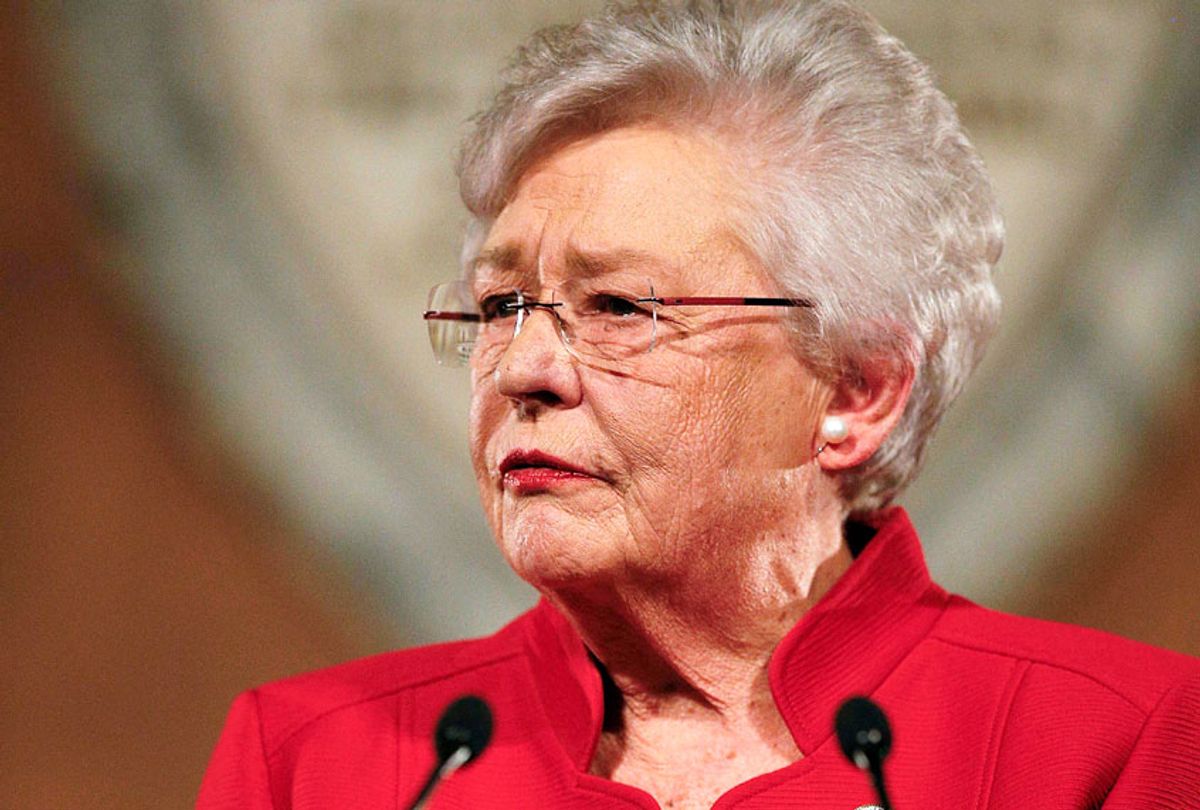 Alabama Gov. Kay Ivey has apologized for wearing blackface in a comedy skit when she was a college student in 1967, but she has made it clear that she refuses to resign from office despite a call from her state's NAACP to do so.

"Heavens no, I’m not going to resign. It’s something that happened 52 years ago, and I’m not that person. My administration stands on being inclusive and helping people," Ivey told the Associated Press on Tuesday.

The controversy erupted after a 1967 college radio interview surfaced with her then-fiance Ben LaRavia describing the future governor as smearing "black paint all over her face" for a comedy sketch called "Cigar Butts" at the Baptist Student Union. When Auburn University officials discovered a recording of the interview while engaging in a project to preserve records, Ivey's office decided to release the recordings.

"I was shocked to hear the tape. I didn’t remember being at the Baptist Student Union in any kind of skit like that for sure," Ivey said on Tuesday. "But I’ve apologized for it. I should not have done that. I know it’s important to apologize to the people of Alabama."

In her statement to the Hill last week, Ivey also said that "even though Ben is the one on tape remembering the skit — and I still don’t recall ever dressing up in overalls or in blackface — I will not deny what is the obvious. As such, I fully acknowledge — with genuine remorse — my participation in a skit like that back when I was a senior in college."

Although Alabama Senate Minority Leader Bobby Singleton, who is African-American, has said that he gives Ivey credit for "owning" the incident, Alabama NAACP President Benard Simelton said that "the NAACP believes Governor Ivey needs to do the right thing and resign as governor and let someone lead the people of Alabama into a brighter and more inclusive future, not the status quo."

Ivey is the second governor to face a blackface scandal in 2019. Earlier this year, Virginia Gov. Ralph Northam, a Democrat, was labeled as one of two individuals in a photograph from his 1984 medical school yearbook showing one man in Ku Klux Klan regalia and the other in blackface. After initially apologizing for the photograph, Northam abruptly reversed course, insisting that neither person was him.

President Donald Trump chimed in at the time to gloat at Northam's misfortune.

"Democrat Governor Ralph Northam of Virginia just stated, 'I believe that I am not either of the people in that photo.' This was 24 hours after apologizing for appearing in the picture and after making the most horrible statement on 'super' late term abortion. Unforgivable!" Trump tweeted in February.

Less than half an hour later he followed up with an additional tweet saying, "Ed Gillespie, who ran for Governor of the Great State of Virginia against Ralph Northam, must now be thinking Malpractice and Dereliction of Duty with regard to his Opposition Research Staff. If they find that terrible picture before the election, he wins by 20 points!"