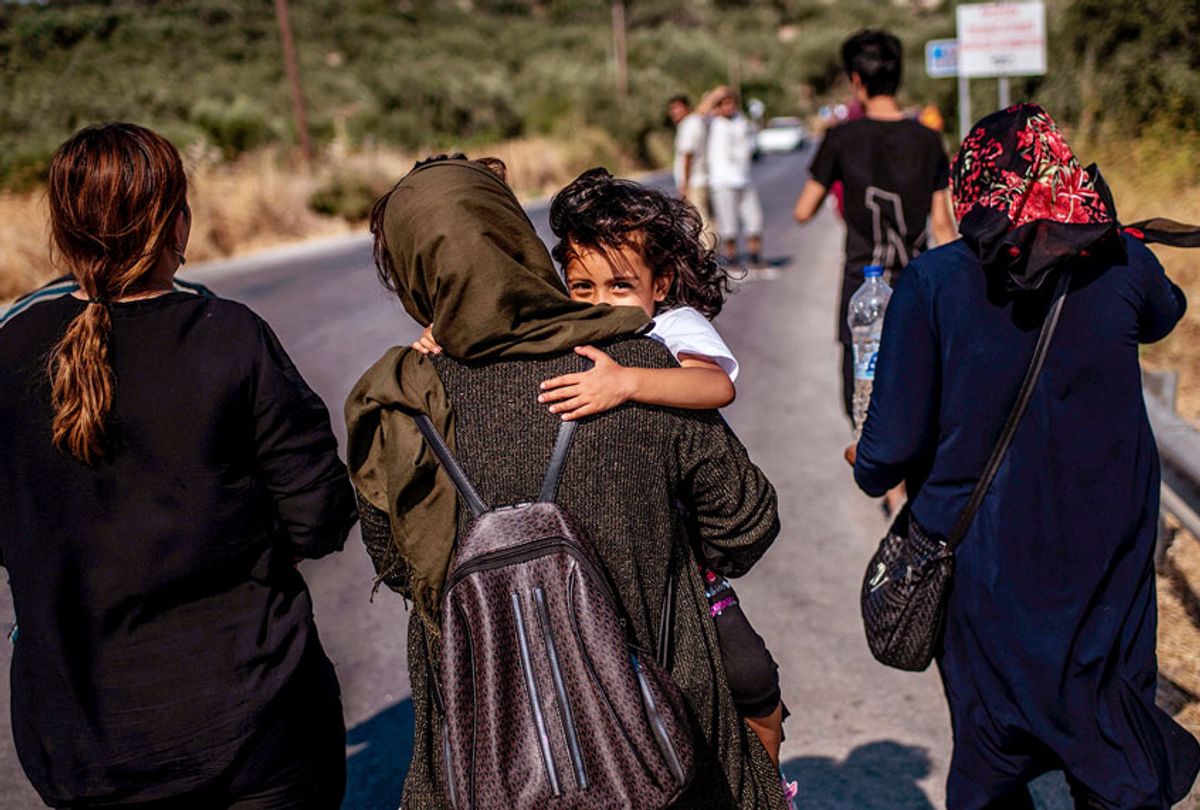 A migrant woman carries a little girl as they walk in a street. (Getty/Angelos Tzortzinis)
--

Migrant children who were separated from their parents at the U.S.-Mexico border as a result of President Donald Trump's controversial "zero tolerance" policy experienced "significant trauma," according to a government watchdog report.

Separated children "exhibited more fear, feelings of abandonment, and post-traumatic stress" than did children who were not separated, according to a report released Wednesday by the Department of Health and Human Services (HHS) inspector general.

The report reveals some children did not understand why they were being separated from their parents, while others thought their parents had abandoned them. Mental health clinicians said some separated children expressed so much grief and confusion as a result of the unexpected separation that they cried inconsolably.

It detailed the challenges faced by the on-site mental health professionals who were already overwhelmed by the mental health needs of children in government custody, many of whom had already experienced severe trauma before arriving to the United States.

"Every single separated kid has been terrified. We're [seen as] the enemy," a program director says in the report, noting that separated children could not distinguish between facility staff and immigration agents who separated them from their parents.

The report provides yet another harrowing view into how the Trump administration's policy of separating families at the nation's southern border has devastated and traumatized thousands of migrant families and children.

The policy, which was rescinded last June amid mounting global outcry, resulted in the separation of thousands of families at the nation's southern border. Separated children were placed into shelters operated by the HHS Office of Refugee Resettlement.

The proportion of children age 12 and younger increased dramatically when the Department of Homeland Security adopted the zero-tolerance policy, and mental health providers at the facilities said they were not adequately prepared to care for children who "presented different needs from the teenagers they typically serve," the report sad.

"The little ones don't know how to express what they are feeling, what has happened," a program director said in the report. "Communication is limited and difficult. They need more attention."

Facility staff reported that children who stayed in custody for longer lengths of time exhibited worse mental health or behavioral issues. Citing facility staff, the reported noted, "Longer stays resulted in higher levels of defiance, hopelessness, and frustration among children, along with more instances of self-harm and suicidal ideation."

One mental health professional told investigators that "even children who come into care with good coping skills become disillusioned after a lengthy stay."

Complicating the situation further was the fact that many children had already experienced intense trauma before arriving in the country. The report detailed a case where "a medical coordinator reported that a girl had been held in captivity for months, during which time she was tortured, raped, and became pregnant," while other children had "witnesses the rape or murder of family members or were fleeing threats against their own lives."

Facility staff reported that the level of trauma and unique experiences of separated children made it "more difficult to establish therapeutic relationships through which facilities could address children's mental health needs."

One program director detailed the story of a 7- or 8-year-old boy who was "under delusion that his father had been killed and believed that he would also be killed," after being unexpectedly separated from his father upon arriving in the United States. The director noted the boy "ultimately required emergency psychiatric care."

The report says some separated children's "psychological pain" translated into physical symptoms. One medical director explained, "You get a lot of 'my chest hurts,' even though everything is fine [medically]. Children describe symptoms, 'Every heartbeat hurts,' 'I can't feel my heart,' of emotional pain."

The report represented HHS with six recommendations for addressing the mental health care of children in its custody, which include minimizing the time that children remain in custody and establishing a maximum caseloads for individual mental health clinicians.

The Administration for Children and Families, part of ORR, appeared to agree with the report's findings. In a statement, the agency said: "ACF is equally committed to providing the public with a fair accounting of ORR program operations. To that end, we agree with OIG that significant factors beyond ACF's control contributed to the issues identified in this report."