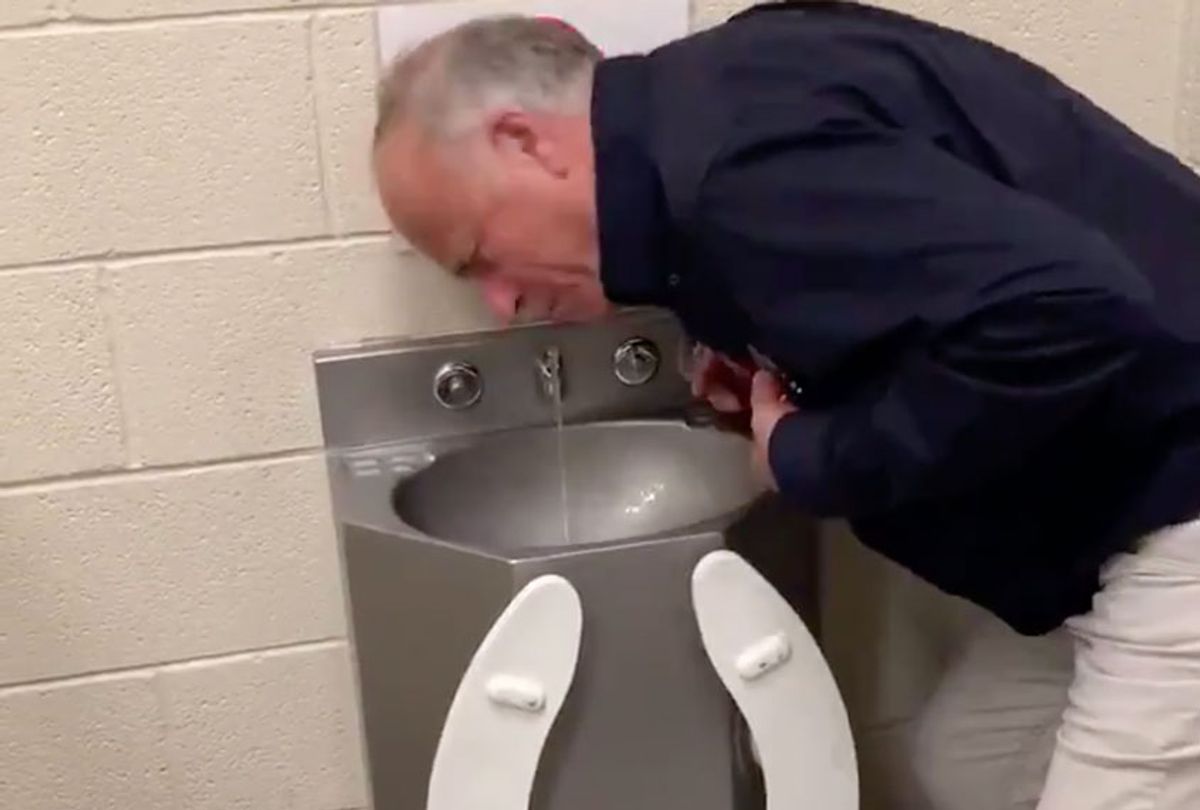 Rep. Steve King, R-Iowa, on Wednesday tweeted a video of himself drinking from a sink attached to a toilet at a migrant detention center as part of his alleged effort to debunk "fake news" about the abysmal conditions documented inside the facilities.

"I actually went into that cell where it was reported that [migrants] were advised they had to drink out of the toilet," King said at a town hall in Eagle Grove, Iowa, while recalling his recent trip to the southern border.

"I took a drink out of there, and actually — pretty good," he added. "I smacked my lips."

King's controversial comments and the video that followed appeared to be a rebuttal to Democrats, who have described the conditions at detention centers as inhumane. The congressman said there was "no way" Rep. Alexandria Ocasio-Cortez, D-N.Y., was "objectively honest" when she described the conditions at the centers she visited last month, dismissing her claims as "click-bait for Snowflakes."

Shared to Twitter, the video shows King taking a sip from a hybrid toilet-water fountain at a migrant detention center, which he reviews as "not bad."

Ocasio-Cortez fired back at King on Wednesday night by declaring her colleague from the other aisle to be "anti-immigrant."

"There is a genre of videos where GOP House members - who clearly didn't read sworn testimony that detention sinks were broken- filming themselves drinking out of toilet sinks," the New York representative tweeted. "They're so anti-immigrant they risk pink eye to show off that they didn't do the reading #CloseTheCamps."

King, who has found himself largely abandoned by Republicans in Congress following his seemingly endless series of racist and offensive remarks, attempted to explain how the sinks work at Wednesday's town hall. He called reports of migrants having to drink out of toilets "misinformation" that stemmed from a language barrier between officers and detainees.

"But I think there was a little language barrier there, and so that's how come we got that misinformation," he claimed.

In July, Ocasio-Cortez toured two centers run by Customs and Border Patrol (CBP) officers in the Texas cities of Clint and El Paso with more than a dozen members of the Congressional Hispanic Caucus and additional House Democrats. The congresswoman said at the time that CBP officers instructed detained women to "drink out of the toilets."

Congressional Democrats, human rights activists and immigrant advocates have widely decried the conditions at migrant detention centers as not only sub-human but also unsanitary.

Attorneys who inspected one of the centers visited by Ocasio-Cortez said children as young as seven and eight years old were caring for infants whom they had just met; some teenage mothers wore clothes stained with breast milk; and most of the young detainees did not have access to toothbrushes or soap and had not bathed since crossing the border.

The Department of Homeland Security's internal watchdog described squalid conditions in several detention centers for migrant children and families in Texas. The scathing report detailed "dangerous overcrowding" and minors going without hot meals for days who relieved themselves in their pants. Some adults at the facilities were reportedly held in standing-room only conditions for a week.

Pictures included in the report showed migrants at the facilities crowded behind fences and sleeping on the concrete floor with aluminum blankets.

Rep. Joaquin Castro, the twin brother of Democratic presidential candidate Julián Castro and the chairman of the Congressional Hispanic Caucus, said in July that women at the El Paso facility were "crammed into a prison-like cell with one toilet, but no running water to drink from or wash their hands with." Many of those women, he said, "had not bathed for 15 days."