"It Chapter Two": Pennywise is back in a fitting follow-up — but is that a good thing? 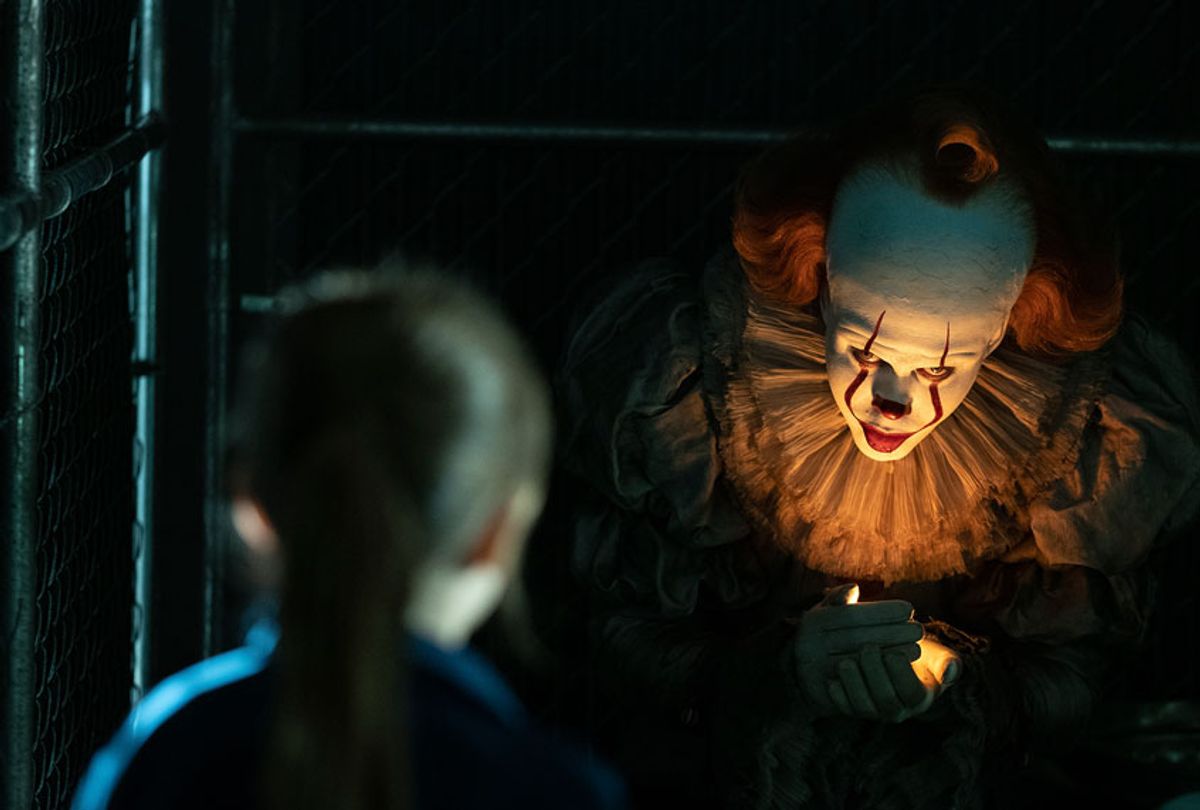 This is both a good thing and a bad thing. On the plus side, each movie completes multiple character arcs in more or less satisfying ways, understanding that for all of the expensive special effects being displayed on screen, the main quality that makes or breaks a film is whether or not we care about the protagonists. Each one also has an iconic villain at the center of its story, although the baddie in "It Chapter Two" is horrifying, while Thanos of the MCU is intended to be more of an intimidating "final boss" archetype. Finally each movie, despite the roughly three-hour running time, feels lean; neither drags or feels padded out, but keeps moving along at a brisk clip.

On the less flattering side: Each movie works better on an emotional level than a logical one.

Picking up where 2017's "It" left off, "Chapter Two" — again directed by Andy Muschietti — tells the story of seven adults who have suppressed traumatic memories from their childhoods in the fictional town of Derry, Maine. They are of course forced to confront them when an evil supernatural clown threatens to murder innocent people.

As readers of King's novel will know, the cast of characters is extensive. It includes Bill (James McAvoy), a successful writer who had to overcome a debilitating stutter as a child; Richie (Bill Hader), a stand-up comedian whose vulgarity is revealed to be motivated by a secret character trait that serves as one of the film's plot twists (and one of the most notable deviations from previous tellings); Beverly (Jessica Chastain), a fashion designer who was physically and sexually abused by her father; Eddie (James Ransone), a risk assessor who suffers from hypochondria and had an overbearing mother; Ben (Jay Ryan), a wealthy architect who used to be obese; Mike (Isaiah Mustafa), the town librarian whose family suffered from drug abuse and still struggles with it himself; and Stanley (Andy Bean), who was frightened and weak as a child and is much the same as an adult.

Not surprisingly, a movie that has to juggle so many plot threads at once — and that's not including the violent bully Henry (Teach Grant), who went to prison after murdering his father in the first movie — will wind up shortchanging a few of them. The big twist about Richie feels underdeveloped, which is a shame given Hader's strong dramatic performance, and the movie's attempts to tie into larger social issues comes across as forced, if well-intentioned. Likewise the movie's attempt to elevate a crucial choice made by Stanley early in the story into something more noble falls flat. In  both King's 1986 novel and the 1990 television film, that aspect of Stanley's character felt like a lazy anti-Semitic stereotype. Here it's more respectable, but only makes sense if Stanley knew things that, in plot terms, only another character could possibly have known.

These aren't the only story glitches in "It Chapter Two," which too often falls into the horror-movie trap of characters who do things no one with a functioning sense of self-preservation instinct would actually do. Muschietti also relies on jump scares on too many occasions, which feels unnecessary given how much creative energy was spent on developing genuinely grotesque and horrifying visuals. Finally there are a number of moments when Pennywise the evil clown could easily dispatch important characters and doesn't, simply because if he did, the movie would be over.

Where the parallels between "It Chapter Two" and "Avengers: Endgame" are positive: When it comes to the main qualities genre fans will want, it definitely delivers. Just as "Endgame" had the superheroics mainstream audiences crave in blockbuster cinema, "It Chapter Two" absolutely brings the scares. Its peak moments rank among the most frightening seen in mainstream movies in recent memory, right up there with other 2019 horror hits like Jordan Peele's "Us" and Ari Aster's "Midsommar." Just as important, Muschietti and screenwriter Gary Dauberman (adapting King's book) make the story feel like an epic payoff to years and years of character development, a feat that is particularly impressive when you consider that "It Chapter Two" only follows up one movie and "Avengers: Endgame" had 21 previous films to work off of.

Considerable credit must go to the cast, particularly Bill Skarsgård who once again takes the role of Pennywise the Dancing Clown and makes him into a presence both over-the-top in his campiness and yet weirdly haunting long after the credits have rolled. Skarsgård does for Pennywise what Heath Ledger did for The Joker in "The Dark Knight," taking a character that had been previously played for camp (by Tim Curry in the "It" TV movie, and Jack Nicholson in Tim Burton's 1989 "Batman," respectively) and going into meaner, darker places without completely losing touch with earlier versions. This Pennywise, although menacing, also at times comes across as a frightened, vulnerable child. There is human complexity to this transdimensional being that likes to toy with its prey, a sense that there is a personality with issues beneath the one-liners and horror villain tropes.

The child cast also deserves accolades here. As in the first movie, Finn Wolfhard, Jaeden Martell, Jeremy Ray Taylor, Sophia Lillis, Jack Dylan Grazer, Wyatt Oleff and Chosen Jacobs are all outstanding — and they need to be, given that their deep friendship provides the movie with its emotional core. (Nicholas Hamilton is also outstanding as the child version of the psychopathic Henry.) The story also uses the horrors of Derry as an allegory for the various forms of childhood trauma, especially the way we both repress scarring memories and are nevertheless shaped by them as adults.

Overall, "It Chapter Two" is a fitting companion piece to the first film. There are flaws, to be sure, but nothing you wouldn't expect going in. If you liked "It," then you definitely won't be disappointed. If you didn't, why are you even here in the first place?