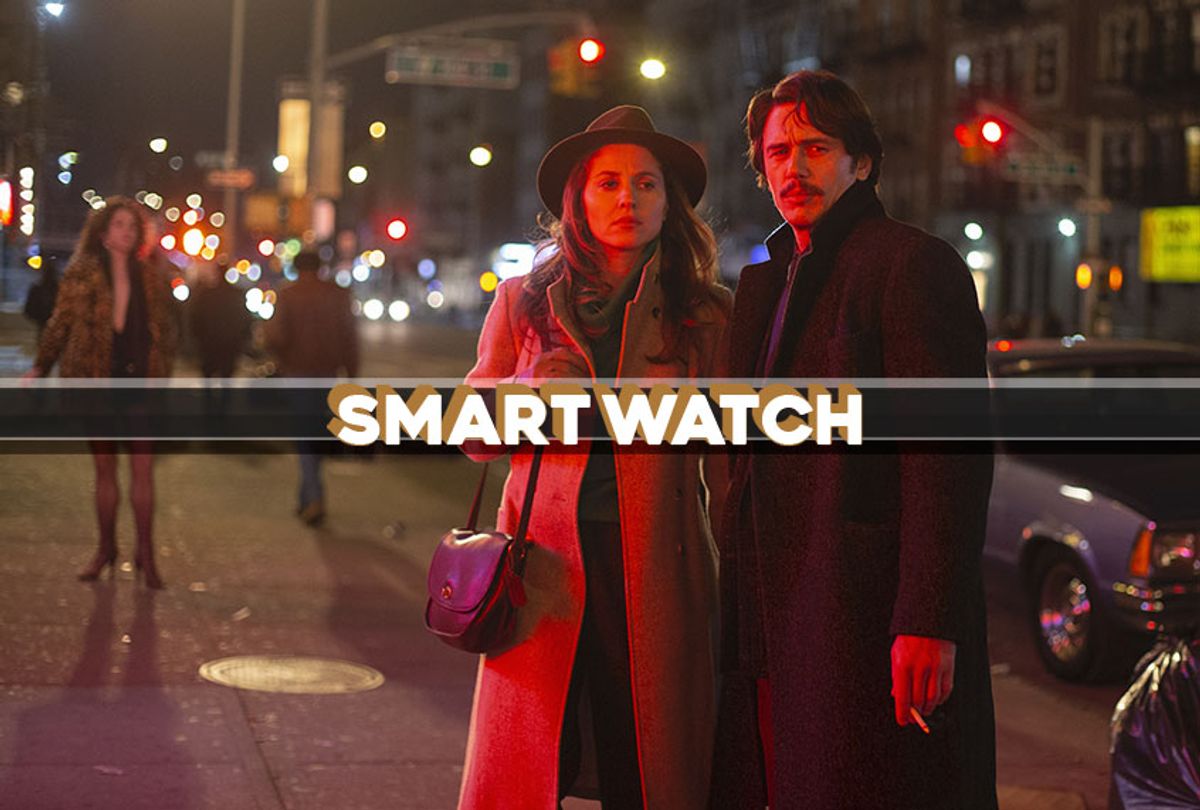 Margarita Levieva and James Franco in "The Deuce" (HBO/Paul Shiraldi)
--

Each new season of “The Deuce” introduces a new pop song playing behind its opening credits. The first season's episodes are introduced by Curtis Mayfield’s “(Don't Worry) If There's a Hell Below, We're All Going to Go,” while the second season opens each hour with a cover of Elvis Costello’s “This Year’s Girl.”

Candy got into adult film to add a cerebral element of medium to appeal to women and place the portrayal of sexuality onto a more event playing field, only to have technology end-run her efforts and take the actresses in skin flicks straight back to a state of pure objectification.

What may strike you about the drama’s third season is its ease of viewing compared to prior seasons. This is not to suggest that Season 3 is necessarily better than the others; the writing on this show is consistently stellar throughout its run, and the cast is one of the best on television. It could be that watching a number of episodes in succession inures a person somewhat to the off-putting grime that dominated 1971 New York City. This season’s bi-coastal storyline makes 1985 look shiny at times.

These episodes in themselves provide a commentary on the cost and benefit of a fringe, taboo culture being normalized for profit. The gentrification of Manhattan temporarily benefits Vinnie Martino (James Franco) and Abby Parker (Margarita Levieva), since their bar has evolved into a popular area nightclub. But it’s also attracted more attention from mobsters who aren’t as friendly as the made men they know. Vinnie’s twin Frankie (also Franco) is still earning thanks to his peep show booths, with brother-in-law Bobby (Chris Bauer) managing a brothel.

And Manhattan is cleaning house, with a new generation of Wall St. pushing in on the area’s real estate and politicians pressuring cops to clean up the area, whatever the cost. All the while, the AIDS crisis is ripping the place apart, claiming the lives of working women and men alike and ravaging the LGBTQ community.

In this season, the “mainstreaming” of a thing becomes synonymous with appropriation or gentrification. The old is claimed, transformed and eventually swept away by the new. And this rarely benefits the women and men at the lower rungs of the social ladder. Emily Meade’s Lori, for example, has one of the more compelling storylines in these new episodes, having found fame and a fan base in California’s adult film world, only to find it gains her little in the way of respect or control.

Abby tries to maintain some say in her movement to help sex workers, only to have it overtaken by conservatives with their own political agenda and zero intention to assist the women right in front of them. Candy, meanwhile, never stops finding a way to adapt and survive, doing what she has to do to achieve her goals. “The Deuce” is not a series that hints at many upbeat endings, but from the initial view into its final walk, there’s real reason to hope that at the end of all her struggling, Candy’s goodbye kiss will be a sweet one.

Much as people might be tickled by ending Sunday with a show about the adult film industry, there’s a definite appeal to spending time with a combination of two of the most wholesome concepts imaginable, “The Brady Bunch” and home improvement television.

This show invites us inside the North Hollywood home familiar to the world as the Brady house, which is apparently the second most-photographed home in the U.S. This being TV, you probably know that only the exterior of the house was used in the show. The famous staircase, the kitchen where Alice merrily slaved away, the bedrooms — all were built on a sound stage, making our memories of the house as real as anything else on the show.

Architectural footprints never stopped HGTV from doing whatever the heck it is that they want to do to a place. The rest is all about cash and muscle.

Naturally, they didn’t simply set them loose with nail guns and hammers and order them to start knocking down walls. The channel strategically matched the siblings with hosts from across its network to tackle each room.

This week’s theme is marital aides, in case you haven’t noticed. We started with titillation, moved on through the nesting and cocooning phase and here we are at the part of the relationship that seems somewhat inevitable.

And, yes, while a show like this smacks of voyeurism, its view into the therapy processes of couples in counseling with Dr. Orna Guralnik over six months is instructive as opposed to exploitative. The couples are genuinely interesting and working their way through problems anybody in a relationship is likely to recognize — how to be considerate of each other’s needs and desires, whether to have children, and how to behave with each other.

Its highest service may be to take the fear out of therapy by showing every side of the process. Guralnik counsels her patients and also allows us to witness as she receives counseling.

“Our job is to deepen their understanding of their dilemma and nothing more,” Guralnik’s therapist tells her, and those of us watching gain new insight, too.

A show like this could have easily been fashioned to make a viewer feel smug as they witness others problems, but this doesn’t do that. It’s not about the misery of others but our own willingness to commiserate.