As of last night, Trump still had Teigen blocked on Twitter. Nonetheless, he still appeared to be nursing a grudge 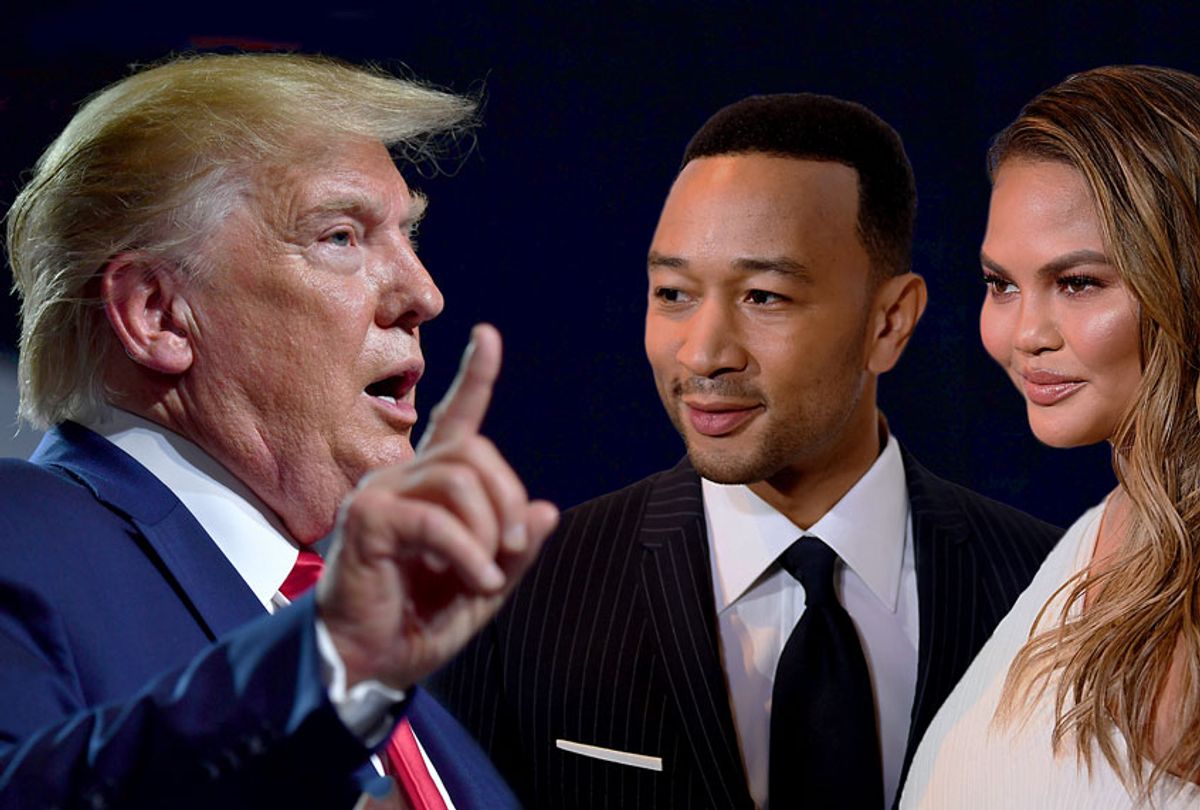 As a televised town hall hosted by Lester Holt wound down Sunday night on MSNBC, President Donald Trump posted a rambling series of tweets claiming that he had not received enough credit for his work on criminal justice reform as he took aim at the “boring musician" John Legend and "his filthy mouthed wife” Chrissy Teigen.

“When all of the people pushing so hard for Criminal Justice Reform were unable to come even close to getting it done, they came to me as a group and asked for my help,” the president tweeted. “I got it done with a group of Senators & others who would never have gone for it.”

Trump was referring to the First Step Act, legislation designed to shorten the mandatory sentences for some federal drug offenses, which was signed into law with bipartisan support in December. However, criminal justice advocates question the current commitment to the implementation of the law. It seeks $75 million a year for five years for prison education and job-training, but Trump’s 2020 budget priorities only showed $14 million to finance its programs.

“I SIGNED IT INTO LAW, no one else did,” Trump continued Sunday. “Guys like boring musician @johnlegend, and his filthy mouthed wife, are talking now about how great it is—but I didn’t see them around when we needed help getting it passed.”

He added: “Anchor” @LesterHoltNBC doesn’t even bring up the subject of President Trump or the Republicans.”

It should be noted that in the "Dateline" episode that preceded Sunday’s town hall, Holt did credit Trump for the First Step Act. Though, as Holt pointed out, "That doesn’t affect more than 90 percent of the U.S. prison population, which is locked up in state and local facilities."

While Legend, who uses his platform to advocate for prison reform, was part of the town hall, Teigen was not mentioned during the broadcast. However, if you have been remotely active on Twitter since the beginning of Trump's presidency, you’re already aware that the commander-in-chief has a proclivity to start — and maintain — crude Twitter feuds with celebrities and members of the media, especially women.

The habit is frequent enough that it has populated numerous listicles such as “Trump's Most Ridiculous Twitter Feuds In 2017” and “Donald Trump vs. Everyone: His 20 Best Media Feuds.”

Chrissy Teigen ended up on Trump’s online enemies list during the 2016 election after she voiced her disdain for his politics on Twitter. In July 2017, the president blocked Teigen after she tweeted that "no one likes you.”

As of last night, Trump still has Teigen blocked. Nonetheless, he still appeared to be nursing a grudge.

“lol what a p**sy ass b*tch. tagged everyone but me. an honor, mister president,” Teigen responded. “[T]he absolute best part of his tweet is I literally didn't speak in the special, nor was I mentioned. I'm cackling at the pointless addition of me because he cannot not be a bitch.”

As of Monday, the Twitter landscape overwhelming reflected the content of Teigen’s response, with the following topics trending: #foulmouthedwife, #PresidentPAB, #PABOTUS and #TeamChrissy.

“Imagine being president of a whole country and spending your Sunday night hate-watching MSNBC hoping somebody--ANYBODY--will praise you,” the musician tweeted. “Melania, please praise this man.  He needs you.”