Democratic debate No. 3: Will we finally get a Warren-Biden showdown?

Bad blood between Elizabeth Warren and Joe Biden goes back to the '90s. Will we see that on stage in Houston? 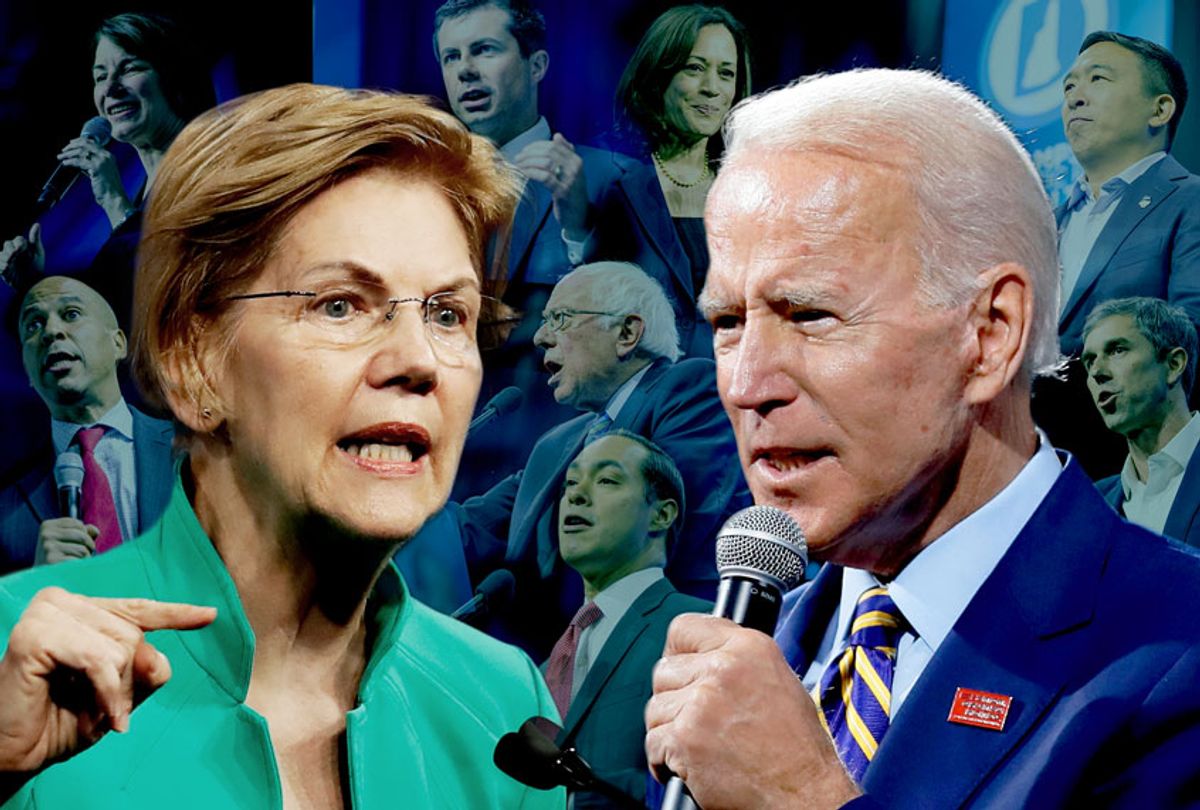 Among political junkies, there is only one real question going into the third debate of the Democratic primary: Will Elizabeth Warren stick it to Joe Biden or not?

Anticipation is high not just for horserace reasons,  although it's true that Warren — who has been climbing in the polls while the other top contenders have stayed steady — likely has the most to gain by weakening Biden. It's also not just because the Massachusetts senator is a sharp debater who communicates clearly, while the former vice president has often seemed confused and distracted throughout the campaign. And it's not just because Warren is seen as representing the progressive wing of the party while Biden is much more an old-line centrist.

It's also because the tension between these two isn't just a competitive display that fades into political collegiality when the cameras turn off. There's good reason to believe there is no love lost between these two, due to disputes that go back to the 1990s, when Warren was a law professor and Biden was a senator from Delaware.

As reporter Nik DeCosta-Klipa has painstakingly recounted for Boston.com, Warren and Biden have "a uniquely contentious history," due to clashes over bankruptcy law in the late '90s and early 2000s. It started when Biden started to push for a bankruptcy reform bill that Warren, who is an expert in bankruptcy law, adamantly opposed.

As a senator, Biden was heavily tied to the lending industry that is largely housed in Delaware for regulatory reasons, and repeatedly argued that people declare bankruptcy simply because they are irresponsible and choose to skip out on their debts. Warren argued that bankruptcies were rising due to the rapidly expanding cost of living for the middle class and "a result of job loss, medical expense, divorce, or a combination of those causes."

Warren went after Biden for years over this issue. She convinced Bill Clinton to veto Biden's first bankruptcy bill — by appealing to the then-president through Hillary Clinton. She publicly waged a campaign against the next version Biden proposed under George W. Bush, culminating in a tense exchange between the two when she testified against his bill in a 2005 Senate hearing.

"You gave me hell," is what Biden said to Warren when he swore her into the Senate in 2013.

In case you're wondering, Biden's bill passed. And yes, the results were every bit as bad as Warren warned.

Warren faces an interesting dilemma here. On one hand, this history between her and Biden creates an excellent opportunity to show voters that she's the one who actually cares about middle-class concerns, and has the receipts to prove it.

On the other hand, there's a real danger that being too aggressive in criticizing Biden might cause voters, who still think of him as jovial "Uncle Joe," to think poorly of her. (It appears that may have happened to Sen. Kamala Harris after the last debate in July.) It's clearly reasonable to fear that pundits will play up sexist stereotypes of the "nag" and the "ballbuster" if she goes that route.

Much of how this plays out could depend on Sen. Bernie Sanders, who is much closer to Warren politically, but who also might not be keen on helping a candidate in this debate who has a real chance of leaving him behind when primary voting begins.

As much fun as it would be to see Warren and Biden go mano a mano, it appears that the Democratic primary rules have allowed 10 whole candidates to appear on the stage in Houston. Many of them — most famously, Harris — have already had a crack on being on stage with Biden in one of the two previous debates, unlike Warren. The big question for them now is whether they can pry any attention away from the Warren-Biden conflict, and if so, how.

The most obvious approach would be to go after Biden, the frontrunner, in hopes of recreating Harris' temporary breakout during the first round of debates in June. But several candidates tried that out the second time around, and the main result was that many viewers felt grossed out and frustrated  by the negative overall tone.

Less exciting, but probably better for the Democratic Party as a whole, would be for each candidate to focus on talking up their own platforms and try to minimize the intramural attacks. The downside of this is that Biden clearly benefits from low-conflict debates: He can skate by on that Uncle Joe persona, rather than reminding voters, once again, that he's not so good under pressure, and even less so lately. Any candidate who wants to be a serious factor in the race will have to cut into Biden's lead.

While some pundits, especially those pulling down one-percenter salaries, are hungrily calling for other candidates to go after Warren, I think most of them see that as a high-risk/low-reward gamble. Warren is generally well-liked, and also likely to get the better of anyone who wants to argue with her.

One last thing to look for is how well former congressman Beto O'Rourke and former HUD Secretary Julián Castro do during the debate. Both are Texans, and therefore on home turf in Houston. More to the point, Houston represents the part of Texas that is multicultural and progressive — it's the fifth most racially diverse city in the country — and both men have a chance to highlight the ways their red state has blue pockets that are growing in power.

In particular, O'Rourke has a chance to use this platform to advocate for the leave-no-county-behind strategy that got him so close to beating Ted Cruz in the 2018 Texas Senate race. That might not be enough to help O'Rourke win the nomination, but an advocate for a strategy that helps shore up down-ticket wins in 2020 is always welcome.

No matter what happens, it's a relief that we're down to 10 candidates — while Michael Bennet, Bill de Blasio, Steve Bullock, Tulsi Gabbard and Marianne Williamson are officially still running, none of them will be on stage Thursday evening. Here's hoping the party can find a way to limit the next debate even further. It's time for campaigns to get focused on the issues and winning over voters, and that simply wasn't possible with so many candidates that even journalists struggled to keep track of them all.

Thursday's debate will air on ABC and Univision, beginning at 8 p.m. Eastern.