Election 2020: A full year of Trump and Biden babbling at each other? Please, let's not

Trump and Biden both sound increasingly incoherent. Democrats still have a chance to nominate someone else 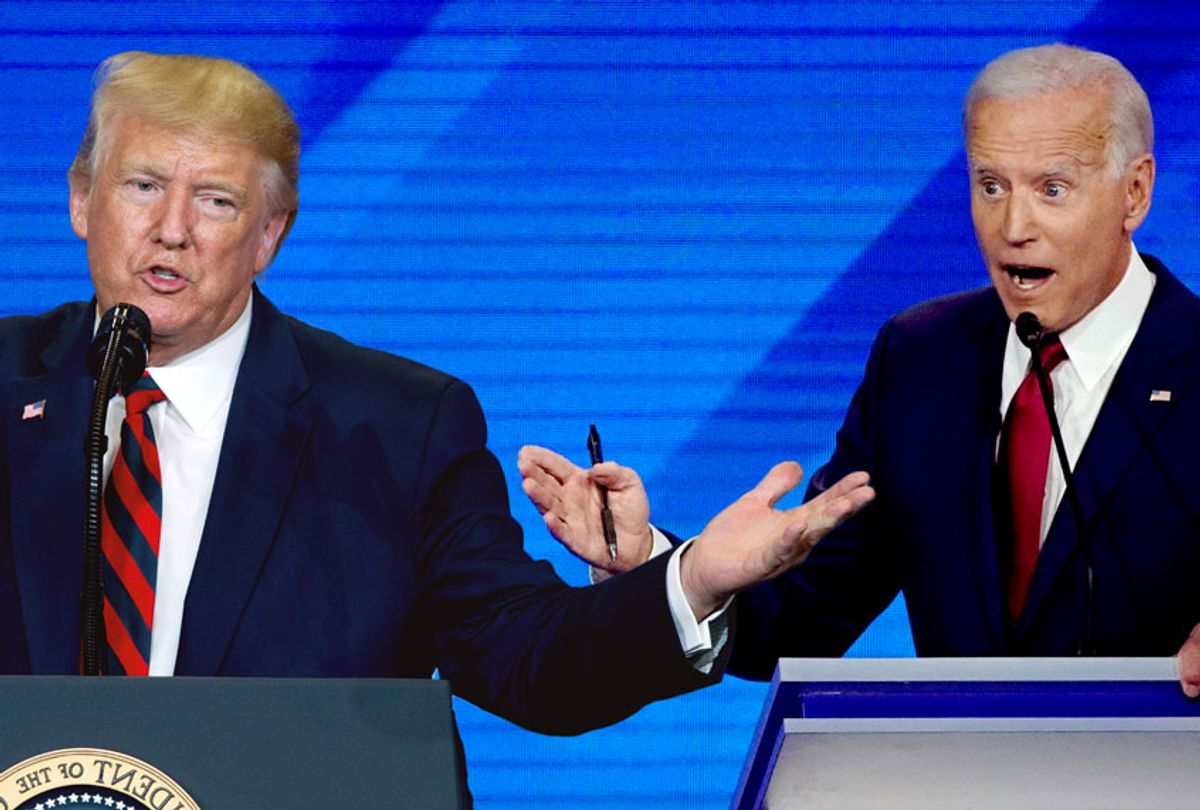 Next year's presidential election is, by wide agreement, likely to be the most important election of a generation, if not more. It's no exaggeration to suggest that the fate of American democracy could be determined by this election. The incumbent president clearly has designs to dismantle the rule of law. To stop him, the Democratic nominee will have to be ready to handle what will inevitably be the ugliest campaign in modern history.

That's why it's not great that, on both sides of the aisle, the word bubbling up to describe both the Republican president and the frontrunner for the Democratic nomination is "rambling."

I put the word "rambling" into a Google news search on Friday morning, and the results weren't pretty.  There was a neck-in-neck race between Donald Trump and former Vice President Joe Biden for who could garner more coverage with that damning word, or with synonyms like "meandering" or "incoherent."

"A rambling Biden maintains the status quo," reads the headline at the Boston Globe.

Beyond headline adjectives, the articles about Biden in the Democratic primary debate Thursday and Trump's counterprogramming speech in Baltimore focused heavily on both men's inability to handle the baseline duty of the politician, which is to communicate ideas clearly to voters.

Biden's performance at the Democratic debate was often confused, but the standout moment came when he was asked what needed to be done to "repair the legacy of slavery " and he answered by saying that parents need social workers because  "they don’t know what to play the radio" or to "make sure you have the record player on at night," a technology that only twee hipsters use anymore. (I am one, so don't @ me.)

That comment was incoherent yet still somehow kind of racist, a combo that's increasingly coming to define the Biden campaign.

Trump, let it be said, was no more coherent Thursday, despite having the benefit of a teleprompter. He ranted about how energy-efficient lightbulbs are the reason why "I always look orange" and made fun of Rep. Alexandria Ocasio-Cortez, D-N.Y., and Mayor Pete Buttigieg of South Bend, Indiana, for having Spanish and Maltese surnames (respectively). He called his vice president "Mike Pounce."

It was incoherent and super-duper racist, a combo that has come to define the Trump presidency.

This is a admittedly touchy subject, talking about the possibility of an election defined by two older men — Biden is 76 and Trump is 73 — rambling nonsense at audiences and at each other. Certainly, people are within their rights to say it was ageist when former HUD Secretary Julián Castro taunted Biden for allegedly forgetting the details of his own health care plan.

Ironically, Biden was actually keeping his story straight on that particular subject. But it's also fair to note that he repeatedly lost the plot during the debate and appeared, at one point, to forget Sen. Bernie Sanders' name.

Concerns about mental acuity aren't just about age. After all, Sanders is older than both of those men, at 78. Like him or not, he's sharp and energetic, and no one can deny he communicates his ideas well. Sen. Elizabeth Warren is slightly younger, at 70, but has the wit and energy of a woman half her age. Such is the great injustice of the aging process, which impacts different people at different rates for different reasons, often reasons beyond their control.

It's not fun to think about, especially since the unpleasantness of age is coming for us all. But we have to talk about it. This is the presidency of the United States. Sharpness, clarity and coherence matter.

With Biden and Trump, it might not even be about age, or at least just about age. The rambling and incoherence is just as likely the result of both men living lives of almost unimaginable privilege for decades, Trump as a celebrity businessman and Biden as a U.S. senator, starting in 1972, followed by eight years as vice president.

These two men, in other words, are simply used to being able to prattle on, confident that people around them will nod indulgently, rather than challenge them to make sense. Anyone who has been around powerful older men has likely witnessed this behavior, even without neurological decline.  It's hard to stay coherent when no one ever demands it of you.

Biden and Trump have gone soft. Trump was likely always soft, drifting through life on his daddy's money. And the kid-glove treatment that Biden has grown accustomed to was evident in the way the media covered Castro's insults, as cable-news pundits rushed forward to shame Castro instead of considering, for a moment, whether he has a point about the dangers of running a candidate who can't keep track of what he's saying.

Warren and Sanders, on the other hand, have come at politics from an underdog perspective, and have stayed sharp because they are routinely challenged on their ideas and must continually practice their rhetorical skills.

It might easy for Democratic voters to shrug off these problems with Biden. After all, Trump has the Republican nomination locked down and Biden still looks better by comparison. But that argument fails to consider how absolutely ruthless Trump will be in going after Biden in a general election campaign — and how much the media that is so eager to defend Biden now will play along with Trump's attacks down the road.

Remember how the media went nuts in 2016, taking Trump's flat-out false accusations that Hillary Clinton was unwell and amplifying them to the front page of every newspaper? Trump and his conspiracy-theorist backers had been claiming Clinton was sick for weeks, so when she suffered a brief bout of pneumonia that September, the news media reacted as if  she were at death's door.

That's the kind of media amplification Trump was able to get when attacking a woman who was hale and hearty, and certainly showed as much mental acuity as she ever had. Imagine what's going to happen when Trump's neener-neener accusations of poor health are aimed at Biden, who really does seem to have lost a step. It barely matters that Trump himself is even worse, any more than it did when he made false accusations against Clinton. Democrats are always held to a higher standard by the mainstream media, and there's no reason to think that's changed.

What's frustrating is how unnecessary all this is. Biden is facing a slate of Democratic competitors who could offer a real contrast to Trump's tendency to devolve into gibberish. Warren and Sanders are both strong communicators who have a knack for boiling big ideas down to digestible tidbits and who rarely, if ever, dissemble. Sen. Kamala Harris, Sen. Cory Booker and Buttigieg are all talented orators who address issues clearly, if less pithily than the two progressive frontrunners. And if there's one thing Castro made clear on Thursday night, it's that he can make himself understood.

It doesn't have to be a race where two elderly white guys babble on at us until next November, leaving voters exhausted and wishing they could end it all, barely even caring who wins. Forget ideology or policy or the internal battle between progressives and centrists. Democrats have an opportunity right now to put a priority on coherence.

Maybe it's overly optimistic of me to think this matters, but when it comes to beating Trump, it would be nice to have a candidate who can speak clearly in public. Is that really too much to ask?