All hail Tim Curry's Pennywise, the definitive evil "It" clown

Bill Skarsgård is fantastic as Pennywise the Dancing Clown, but no one will ever beat Tim Curry's iconic portrayal 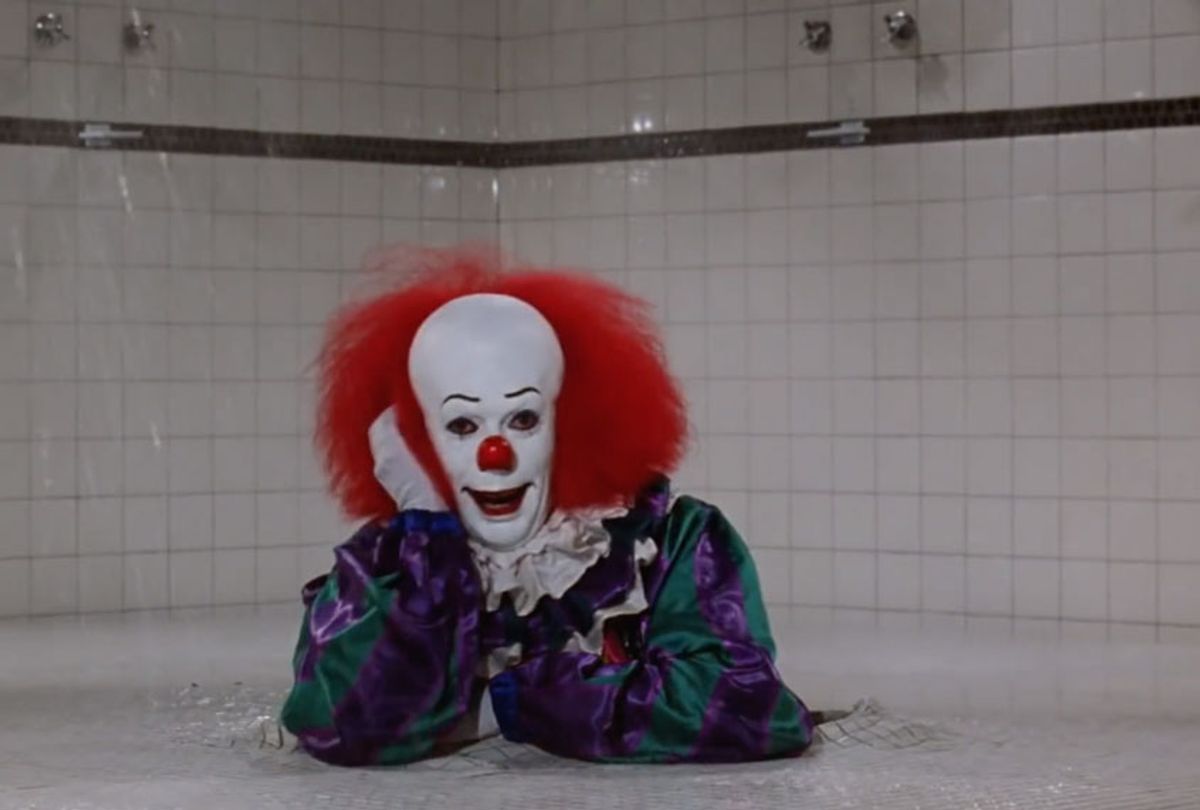 While the new "It" sequel has received mixed reviews (I personally enjoyed it), most critics agree that Bill Skarsgård was outstanding as Pennywise the Dancing Clown, the preferred form taken by the transdimensional malevolent creature known as It.

As I noted in my own review, the Swedish thespian "takes the role of Pennywise the Dancing Clown and makes him into a presence both over-the-top in his campiness and yet weirdly haunting long after the credits have rolled." It is a genuinely terrifying performance, one that works both because of Skarsgård's ability to evoke an otherworldly presence while still remaining eerily childlike and vulnerable, particularly when faced with the threat of death.

Yet while all credit should go to Skarsgård for taking an iconic character and making it his own, we would be remiss if we didn't doff our collective hats to Tim Curry's original performance in the 1990 "It" miniseries.

For one thing, it is quite unlikely that we would have had the recent pair of "It" cinematic adaptations if it hadn't been for that two-part epic, which was directed and co-written Tommy Lee Wallace (perhaps best known for directing and writing the underrated "Halloween III: Season of the Witch"). The Stephen King novel may be famous, but not as widely beloved as masterpieces like "Carrie" or "The Stand." The nostalgia that some fans feel for "It" stems not from the behemoth of the original book — which was bogged down by opaque prose, weird plotting and some squeamish sexual moments that have definitely not aged well — but for the 1990 miniseries, which aired on ABC during the Thanksgiving season. And that miniseries, in turn, is memorable almost entirely because of Curry's unbelievable performance as Pennywise the Dancing Clown.

Indeed, whereas the "It" movies boast strong performances from both the child and adult actors playing the Losers' Club members, the miniseries is much more hit-and-miss when it comes to its casting. For every John Ritter (as an adult Ben Hanscom) and Seth Green (as a young Richie Tozier), you have child actors delivering unconvincing dialogue and adults who chew the scenery in ways that feel hammy rather than entertaining. Even the performances that work, like those of Ritter and Green, are merely effective. If not for Curry's hypnotic central role, the film itself is unlikely to have been memorable.

So what makes Curry's performance as Pennywise so amazing? Three things come to mind.

First, there is the fact that he feels first and foremost like a clown. While Skarsgård's take on the character places a greater emphasis on his extraterrestrial nature, Curry looks and acts for all the world like an honest-to-God circus clown. While I'm not a coulrophobe myself, it is easy to imagine people with an instinctive fear of clowns being terrified of him for that reason alone. For non-coulrophobes, however, the performance is all the more frightening because he takes something that we assume to be innocuous and fun and makes it sinister. Even better (that is, more scary), Curry's Pennywise gives off an air of omnipotence, like he is the puppet master pulling the strings in this small Maine town and anyone trying to stop him may as well try to kill God himself. There is none of the dormant insecurity that Skarsgård brought to his interpretation of the role; from start to finish, Curry's version is 100 percent convinced of his superiority and inevitable victory.

There is also the fact that Curry's clown is funny — and intentionally so. One of the common criticisms of the new "It" movie is that there were many moments of unintended comedy, of scenes that were meant to scare the audience but instead provoked laughter. While I didn't have that takeaway from the film, I can certainly say that director Andy Muschietti and Skarsgård definitely aimed for a more viscerally frightening, and thereby less comical, take on the character. Curry, by contrast, is full of memorable one-liners:

"Excuse me, ma'am. Is your refrigerator running? *gasp* It IS? Well, you better go catch it before it runs away! A-ha! A-ha! A-ha!"

The lines are corny, but that's part of the point — clowns, after all, are not known for their cutting edge comedy. Yet in a manner not dissimilar from his performance as Dr. Frank-N-Furter in "The Rocky Horror Picture Show," Curry is deft at taking cheesy one-liners and reciting them with panache and a slyly malevolent subtext that makes them stick in the memory long after everything else from the plot has faded away. It is a rare gift, one that even an actor as talented as Skarsgård can't imitate.

The final trick to Curry's performance, though, is the sheer joy that comes through. As Roger Ebert once noted in a review for a completely different kind of film, there are some movies where "you sense inner smiles, and you suspect the actors are enjoying themselves." I have no idea whether Curry actually enjoyed himself playing Pennywise — for all I know he was as miserable as Jim Carrey when the latter had to don his own head-to-toe costume for the live-action "Grinch" movie — but he sure seems like he's having a great time. The zest that he brings to the role is so electric that it winds up unintentionally underscoring the film's weaknesses; while all of the scenes in the two "It" movies are entertaining, watching the "It" miniseries is an exercise in waiting for Curry to reappear on screen.

In 2012 Curry suffered a major stroke, and has mostly done voice acting work in recent years, save his appearance as the Narrator in Fox's TV remake of "Rocky Horror." He is one of those actors who is absolutely amazing, an irreplaceable gem like Christopher Walken or Robin Williams, and it could be easy for movie fans to take him for granted as his iconic roles are remade over and over again by the Hollywood machine.

Yet Mr. Curry, I must say this as a certified gorehound: Your role is one of the reasons I became a fan of horror movies. There may be others who play Pennywise, but in the eyes of this critic at least, you are the definitive actor to fill those big red shoes.