Caffeine and clean: Why you should fall in love with shower coffee

After you read this, you'll have no need to take a caffeine-free shower any longer 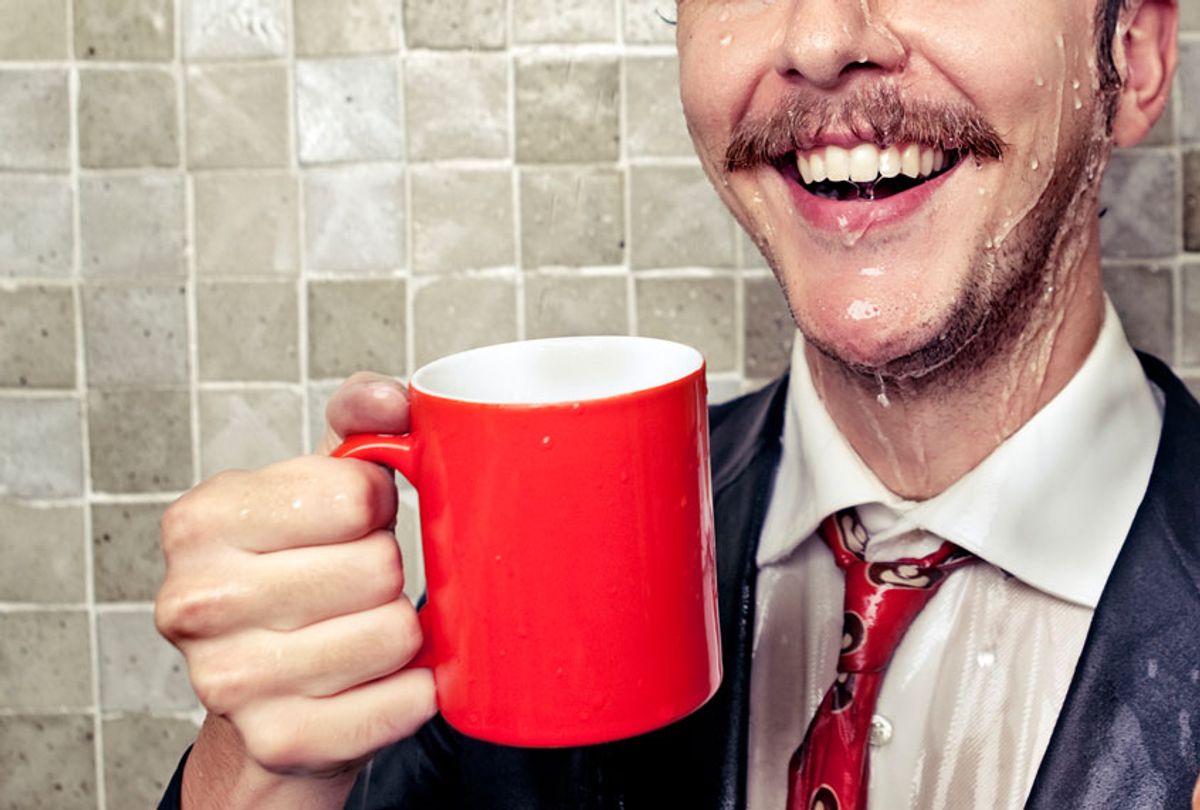 Man having coffee in the shower (Getty Images)
--

This is the year I fell in love with shower coffee: the perky, pre-business hours alternative to winding down with a shower beer or a glass of wine in the bathtub. What began as a necessity on occasions when I was running late has evolved into a near-daily jolt of pleasure.

As with any type of multitasking, there are some logistics that need to be ironed out before you enjoy a sip of shower coffee. Ideally, your shower has a ledge or shelf for safe coffee storage. Travel mugs or a cup with a lid and straw function best, though you may be at peace with getting a splash of water in your drink.

Personally, I like my showers hot and my coffee iced, but there is plenty of room for variety. But while a number of publications have extolled the virtues of the shower beer — last year Thrillist wrote about “The Scientific Reason Why Shower Beers Taste Better” — and compiled lists of ideal brands, there hasn't been much written about what makes an ideal cup of shower coffee.

This is the case despite the fact that when I began to casually poll fellow writers and friends, I discovered my habit was far more common than I had initially thought.

“If a shower beer is a thing to be relished, a shower coffee should be idolized and worshipped,” one messaged me.

Another responded: “Hold the freaking phone. Shower coffee is a thing? Where has this been all my life?”

Philadelphia-based food writer Alexandra Jones said she developed a love of shower coffee as her schedule became more demanding. At one point in time, she had to be up at 6:30 a.m., at the gym by 7:30 a.m., returning home at 8:15 a.m. and logging into work by 9 a.m.

“It seems like a super obvious thing to do now, as I love a good shower beer  — or shower seltzer — after being all hot and sweaty working at the farmers' market or in the garden,” Jones told Salon by email. “When I was really tired, I'd do the coffee first and bring it into the shower with me and turn on a podcast, and it felt like a really nice start to the day.”

“Now it's my weekday morning ritual when I shower," she continued, "even though I'm not currently going to the gym and just quit the job where I have to be online at certain hours.”

Deanna Fox, a food and agriculture journalist and cooking school owner based in Albany, N.Y., said “time management and efficiency” got her into shower coffee.

“I work — more than — full time and have kids,” Fox said. “Having a coffee while showering allowed me to kill two birds with one stone. I used to rest the mug of coffee on the back of the toilet and reach out from the shower curtain for sips, but I just remodeled my bathroom and put a shelf in that was deep enough to hold my favorite mug.”

But the practice does not have to be completely utilitarian. I spoke with some coffee professionals about what makes for the best coffee to enjoy mid-shower on a flavor-level.

Ever Meister has been in the industry for almost two decades. The author of "New York City Coffee: A Caffeinated History," Meister is currently the editorial manager and director of education for the specialty-coffee importing company Cafe Imports.

When it comes to a shower coffee, she tends to save the more adventurous flavors for later in the afternoon and go with a more mellow profile.

“I'll almost always go for a just-bright-enough Colombian coffee or a Peru that has mellow sweetness and some apricot or melon notes,” Meister said. “In layman's terms: A nice mild South American fits the bill for me, but if you need something punchier, a dark-roasted Sumatran or Kenyan coffee will open your eyes right up.”

Of course, one of the hazards of enjoying a cup in the shower is that it may get accidentally diluted with some water. Ashley Rodriguez, the former online editor for Barista Magazine and host of the podcast “Boss Barista,” plans for that.

“So perhaps not a light Ethiopian coffee, since the flavors of that are delicate and floral,” Rodriguez said. “I'd pick a coffee from Central or South America, maybe a nice round Colombian coffee or something from Brazil. They'll still taste great with a few wayward splashes of water from the shower.”

I have a couple personal picks in rotation that fit Meister and Rodriguez’s recommendations. Louisville-based Heine Brothers’ Coffee’s Dog Day Cold Brew is made from a blend of Nicaraguan, Sumatran and Ethiopian ground coffees , which have been steeped in cold water for about 16 hours. Since there’s no heat in the brewing process, the result is less bitter, and the smooth, chocolatey notes really shine through.

Atlanta’s Batdorf & Bronson’s Organic Whirling Dervish Blend has a light acidity, making it ideal for morning. And its super velvety body can handle an extra splash of water or two. If I’m truly in a time-crunch, ReAnimator’s Keystone Blend is instant coffee that actually tastes really good.

So order up one of these blends, check out your local roastery or if coffee is a “volume substance” that you need to buy cheap and in bulk like Fox, Folgers is just fine, too. Regardless, there is no need for you to take a caffeine-free shower any longer.