The common banana is trash and likely to go extinct: Try eating these alternatives instead

The Cavendish banana is doomed, but there are plenty of other commercial banana cultivars Americans don't yet know 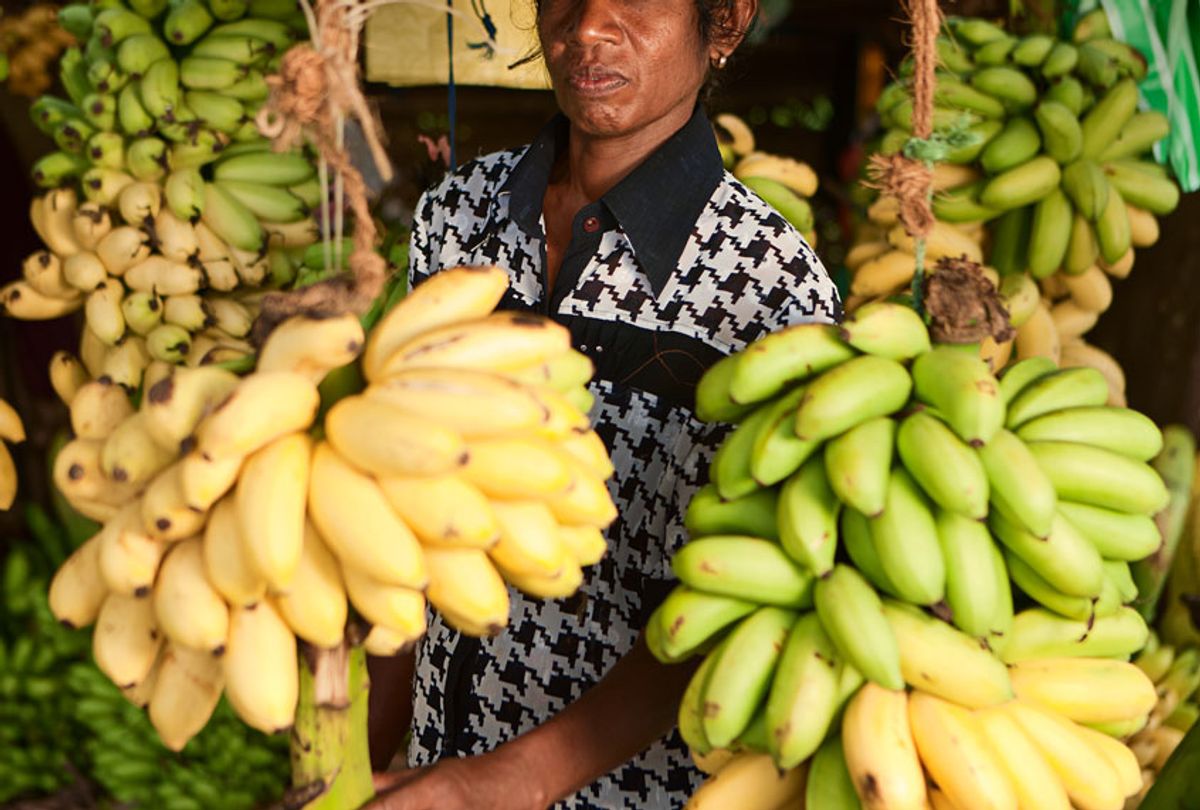 The Cavendish banana, the most common banana cultivar, which defines what most Americans think a banana is, could be doomed. Originally, the Cavendish was planted en masse to replace the Gros Michel banana — the previously ubiquitous cultivar that succumbed wholly to Panama disease in the 1950s and 1960s — in part because the Cavendish was immune to the strain of the disease that killed off the Gros Michel.

With the introduction of the Cavendish, banana producers had a golden opportunity to undo the errors of the past. They could have grown a genetically diverse crop and let the bananas sexually reproduce rather than cloning it every time. That would have created a more robust genome that could have warded off future outbreaks by having increased resistance to disease — thus necessitating fewer pesticides and preserving farmworkers’ health. (Banana pesticides are a unique public health horror: 1,500 Costa Rican banana farmworkers were sterilized from exposure to a banana nemacide in the 1970s and 1980s.)

Marx said that history repeats itself, first as tragedy, then as farce. Fittingly, the titans of the fruit industry did not do anything progressive that would have made the Cavendish more resistant to disease — aside from dumping more pesticides on it. All Cavendishes are clones of one another, meaning they have no genomic resistance. Hence, banana production is “pesticide intensive.” As the advocacy NPO Environmental Working Group reports:

Industrial banana farming is pesticide-intensive because bananas are grown in massive monocultures, without crop rotation. These ill-advised methods render the plants vulnerable to insect pests and fungal diseases. Some experts estimate that banana cultivators use 35 pounds of pesticide per acre, dramatically more than for other produce crops.

Pesticides can only work for so long, though. Now, the Cavendish's apocalypse moment may have arrived. One month ago, reports surfaced that a new strain of Panama disease, known as Tropical Race 4, was found in Colombia. That strain has already decimated Cavendish and other bananas in Africa and southeast Asia. Scientists believed it was merely a matter of time before it arrived in the Americas. That means the Cavendish, which accounts for 99 percent of all banana exports and half of all production worldwide, could soon meet its maker.

The consumer relationship to bananas in the U.S. is admittedly strange compared to most popular fruits. When you shop for apples, oranges, or even melons, dozens of cultivars greet you on the shelf. With bananas, many grocers only carry Cavendishes, or occasionally plantains. Given that all Cavendishes are clones, that means we've been eating the exact same banana for 60 years.

At least specialty grocers in the U.S. will often carry the less-imported bananas from either Asia or Latin America, breeds that are common on street markets in those regions but which most Americans — especially white Americans — are probably unaware of.

Aside from culinary curiosity, a good argument for trying these other cultivars is that you might want to get used to other kinds of bananas in preparation for the Cavendish’s demise. Indeed, the silver lining of the Cavendish’s looming extinction is that it gives us a chance to open our tastebuds to lesser-known bananas. If we start to habituate ourselves now, perhaps our tastes will adapt to alternative bananas in time for its demise.

All of the varieties of banana mentioned below, except for Pawpaws, which are not technically bananas, were commercially available on the shelf at the specialty markets near my house in San Francisco. Thus, I suspect most of them should be stocked in your area if you live in an urban or suburban part of the U.S.

After Cavendishes, this is the breed of banana I see most often on grocery store shelves. If your grocer stocks any other kind of sweet banana aside from a Cavendish, it is probably these. Dole seems to be pushing Baby Bananas particularly hard, perhaps because they seem like a safe bet from a marketing perspective: They’re cute, they look like miniature Cavendishes, and they’re different in flavor but not that different. It is a safe alternative to a Cavendish.

In my taste tests, the Baby Banana had a slightly more floral taste than a Cavendish, particularly when slightly underripe. Note that these bananas ripen differently than Cavendishes: They have a habit of being green at the ends and black-spotted in the middle. Though in that state they appear both overripe and underripe, in practice they are just about perfect.

The flesh of the Baby Banana is thicker than a Cavendish; even when overripe, they are far less mushy. Likewise, the flesh is more grainy, without sticking to one’s mouth the way that green Cavendishes do. You’ll find the insides of the Baby Banana are yellower than other bananas. The fruit has a surprisingly strong smell, and accordingly, the flavor is strong: The bouquet has a hint of something similar to a stone fruit and could be compared (faintly) to a peach. Likewise, I found the Baby Banana more citric than the others I tasted.

Though they appear almost exactly like Baby Bananas, the flavor profile is a bit different. The Manzano is a softer banana with a very mild flavor — not mealy at all, smooth and pleasant. Intriguingly, the aftertaste is sweeter than the initial bite. Both the size and the texture makes them very good in smoothies. Many sellers categorize the Manzo as a "dessert banana."

I would recommend the Manzano over the Baby Banana for children, who tend to be picky eaters (in part because children have more tastebuds than adults). The Manzano is similar enough to the Cavendish that children might not notice the difference in flavor.

Finally, we enter a new terrain. I’d argue that the Baby Banana and Manzano are entry-level ‘naners, while the Saba is intermediate. It appears bred to serve as an intermediary between a plantain and a sweet banana, and it can be treated as either: eaten raw, like an everyday Cavendish, or chopped up into coins and sautéed as one might prepare a plantain. Unlike the Central American Manzano, the Saba cultivar originates from the Philippines.

The Saba is fat in its cross-section, and shorter than a Cavendish. The skin is quite thin. Even when overripe, the Saba has a flavor of a slightly green Cavendish: slightly sticky in the mouth and faintly mealy. It is the most mild of the aforementioned bananas and only faintly sweet. When overripe or brown, the raw fruit takes on a strong and unpleasant fermented flavor.

No. 4: The traditional plantain

Americans of west African or Latin American descent probably know of the plantain, as it is a staple cuisine in many countries with tropical climates. Likely many of us have either cooked it ourselves, or had it in the form of plantain chips — common in big city bodegas and corner stores. If you somehow have missed out on the plantain, know first that it is not really supposed to be eaten raw: most chop it into coins or mash before cooking it, later adding salt. If you cook it in coconut oil to the point that it browns, some of the starches should caramelize and give it a sweet flavor.

I am no expert in plantain recipes, but there are many, many recipes online for those who want to experiment with this savory banana. Here’s a recipe for Kelewele (Spicy Fried Plantains) from an Afro-Caribbean cooking blog; or, if you prefer something sweet, a recipe for Costa Rican sweet plantains.

Bonus (not actually a banana): The Pawpaw

To clarify, the Pawpaw is not actually in the banana family. It merely tastes a lot like one. But it is worth mentioning, because it would be very beneficial for the planet if the U.S. stopped consuming so many bananas and started eating more Pawpaws, as they are native to North America and grow in colder climates — unlike bananas, which only fruit in tropical climates. Though there is a bit of banana production in California and Florida, most of the bananas Americans eat are shipped from central and South America to us at great fuel costs. Hence, it would certainly cut down on CO2 emissions if we substituted carbon-intensive bananas for locally-harvested Pawpaws.

But Pawpaws are a lot more delicate than thick-skinned bananas, and sadly, if a fruit or vegetable does not ship well, the gods of industry will choose not to produce it. That is why berries native to the U.S., such as the thimbleberry, are not sold in grocery stores and thus only foraged: They are either too delicate to ship or have half-lives too short to survive the time between picking and distributing.

The Pawpaw falls in this category. Though the Pawpaw tree is common in much of the midwest and the Appalachia, few people seem to be aware that its ovular fruits are not only edible but have a rich, custardy, tropical flavor.

If you don’t know of a wild Pawpaw tree in your neighborhood, there are a few brave farmers who have attempted to grow this difficult delicacy on an industrial scale. Michigan-based supplier Earthy Delights is one of the few distributors that supplies it, though at a price: buying in bulk runs from $12-15 per pound. David Eger, who works in marketing for Earthy Delight’s parent company, told Salon why it is so hard to merchandise.

“It’s pretty simple — the Pawpaw fruit is highly perishable,” he explained. “It ripens very quickly. It ripens fast, and the fruit becomes soft. And it’s difficult to ship — we’ve had many years experience in the business doing it, we know how long you can hold them.”

That all sounds daunting, but to clarify, there are many people either foraging or buying pawpaws in the U.S. As for consumption, Eger explained that the fruit turns black like an overripe banana when it is edible. “It looks spoiled when it’s reaching its peak,” he added.

Though the range of the Pawpaw is vast (across almost the entire eastern U.S.), its fans seem to be concentrated in the midwest. The Ohio Pawpaw festival, held in Albany, Ohio, ran from Friday, Sept. 13 through Sept. 15 this year. One highlight of the festival is the beer: a number of Ohio and Pennsylvania brewers have incorporated pawpaws into their brews, where its floral flavors are especially well-suited.