Time for the 2020 candidates to go after Trump on his supposed strength: the failing economy

Democratic candidates have veered away from direct attacks on Trump. That's a big mistake — he's getting weaker 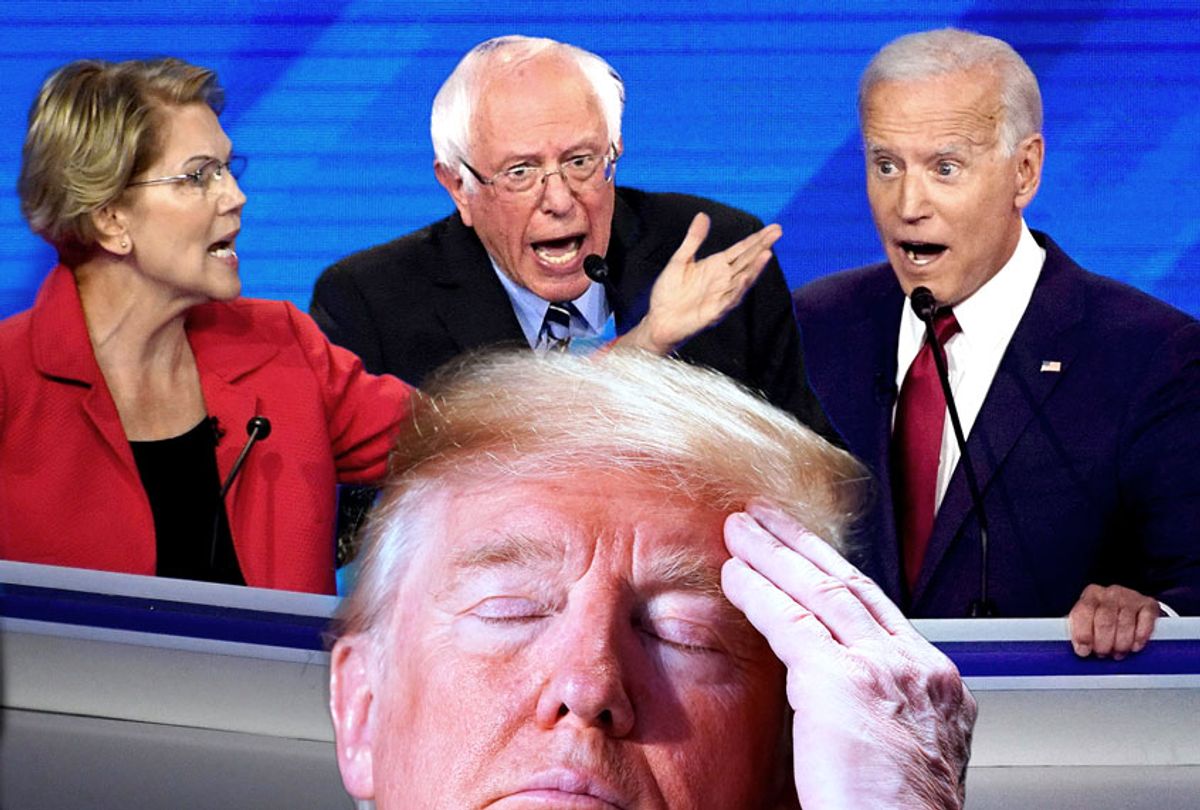 Among many outcomes and observations following last week’s ABC News/Univision presidential debate, there were only two candidates who were willing to attack Donald Trump and the trolls who surround him: Sen. Kamala Harris and former Rep. Beto O’Rourke. That’s not to say the others didn’t mention President Trump at all. It's just that Harris and O’Rourke stood out in terms of their unflinching and aggressive attacks against Trump (Harris) and the Republican Party’s destructive fealty to the gun lobby (O’Rourke).

There’s a noticeable pee-shyness among the Democrats, too often quivering like Shaggy and Scooby over being seen as too anti-Trump or too anti-gun in the face of the elusive white-male diner crowd, despite the reality that Trump’s approvals are stuck in the 40 percent range, give or take. Likewise, support for a new assault weapons ban and an expansion of federal background checks is practically universal. A recent Fox News poll showed 67 percent support for an assault weapons ban and 90 percent support for expanded background checks. Oddly, those numbers indicate that Harris and O’Rourke weren’t really going out on any limbs here, except when contrasted with the baffling timidity of the other Democrats.

Rather than continuing to bend over backward trying not to offend white men in suburban Ohio, it’s long past time for the Democrats to pivot back toward attacking Trump, ignoring the contrarian whining about how they have to be more than just anti-Trump in order to win. Each of the top five or six Democratic candidates right now has done a fine job proving they have policy chops. Myriad technocratic legislative initiatives have been well established and described.

Arguably the most immediate crisis we face, short of the climate crisis, is Donald Trump. Democrats need to seize on this and actually say it. In a general sense, they could borrow Trump’s habit of selling his name by adding it to his areas of malfeasance. Where there was once Trump University, Trump Steaks and Trump Vodka (all failed), there are now Trump Crimes, Trump Prison Camps, Trump Treason, Trump Bigotry, Trump Dictators — you get the idea. Make his name synonymous all of it, and don’t let up.

But there’s one area where Trump is ripe for a new round of bludgeoning, and it happens to be perhaps his strongest area: the economy. The Democrats have enough ammunition to relentlessly hammer him on this, and without getting too wonky about it.

Even the most cult-like Red Hat will tell you that part of Trump’s appeal is his status as a CEO, as a businessman. For what seems like decades, political neophytes have been clamoring for a president who runs the government “like a business.” It’s always been a ridiculous trope: The federal government isn’t a for-profit endeavor, and is structured and managed very differently than a business. Despite this zombie myth, and given the alleged economic anxiety among certain (mostly white, mostly male) voters, Trump was elected due to his supposed entrepreneurial chops.

For the rest of us, Trump’s bogus yet carefully crafted reputation as a successful business leader has been immensely confounding, given his actual record of horrendous business failures, including multiple bankruptcies and financial losses so massive and record-breaking that he personally dragged down the U.S. economy, while being placed on an allowance due to his frivolous personal spending habits.

Nevertheless, he ascended to the White House on this false frame of Trump as a dealmaker, the quintessential CEO president. CEOs, however, are tasked with generating profitability for their shareholders. This is where Trump’s fake success as a businessman, and as a president, disintegrates.

Last month, I reported in this space that the Congressional Budget Office had projected a federal budget deficit of $1.1 trillion by the end of 2020. Brand new projections by Trump’s own Treasury Department, however, show a much more rapid deep dive into the red. According to Steve Mnuchin, the budget deficit has already exceeded $1 trillion — today, right now. Is anyone else flashing on Trump’s casino bankruptcies? If not, you should.

To put that into context, Barack Obama presided over a nearly $1 trillion reduction in the budget deficit, from $1.4 trillion at the end of fiscal year 2009, based on spending approved by George W. Bush in the autumn of 2008, to $585 billion when he left office in January 2017, following eight harrowing years of Republican screeching and fear-mongering about a deficit-inflating socialist takeover of America. The numbers disagreed with the GOP screeching, and numbers don’t lie.

You know how Trump’s entire agenda is to erase the Obama legacy? Trump’s fiscal incompetence has erased almost all of Obama’s deficit reduction, too, spiking the deficit back to levels in the range of the Great Recession.

Our “CEO president” sucks at turning a profit. And he’s not so great at creating jobs, either.

Even if we credit the November 2016 through January 2017 job creation to Trump — which we shouldn't, since Obama was still president — Trump’s first 34 months in office have trailed behind Obama’s final 34 months in terms of total jobs created. Trump presided over the creation of 6.48 million jobs in that 34-month span, while Obama oversaw 7.67 million jobs in his final 34 months.

Making matters much worse for Trump on the jobs front is his destructively whimsical trade war. According to a new forecast by Moody’s Analytics, Trump’s tariffs have cost the U.S. economy 300,000 jobs so far. If he continues to screw around, that number will climb to 450,000 by the end of 2019 and a whopping 900,000 by the end of 2020.

Again, the numbers don’t lie, but Trump does. A lot. We haven’t even mentioned yet that Trump was born on third base in terms of economic growth, job creation and the Dow, with numbers already ascending on a robust upward trajectory during one of the longest economic expansions in history, even while Trump hyperbolically described the Obama economy as “American carnage” in his inaugural address.

Take a guess at how many Democrats mentioned these deficit and jobs numbers during last week’s debate. Zero. Not even Bernie Sanders.

Granted, part of the problem has to be the sheer enormity of the panel. Half of the candidates on the debate stage have no chance of being president, and yet there they were, complete with the latest CEO presidential tourist, Andrew Yang. The CEO president’s economy isn’t as stellar as he insists, and the numbers back up that observation.

So why not go right at the problem? Attack Trump's only apparent strength. The more the Democrats nail him on the only factor keeping his presidency afloat — the more they can outflank him on his shoddy economic record — the better off Democratic chances of winning both the White House and Senate will be next year. This would also show Democrats seizing the initiative, owning it with conviction. It’s not too late, but the time is now.