Welcome to "Narrowsburg," a tiny town conned out of its Hollywood dreams 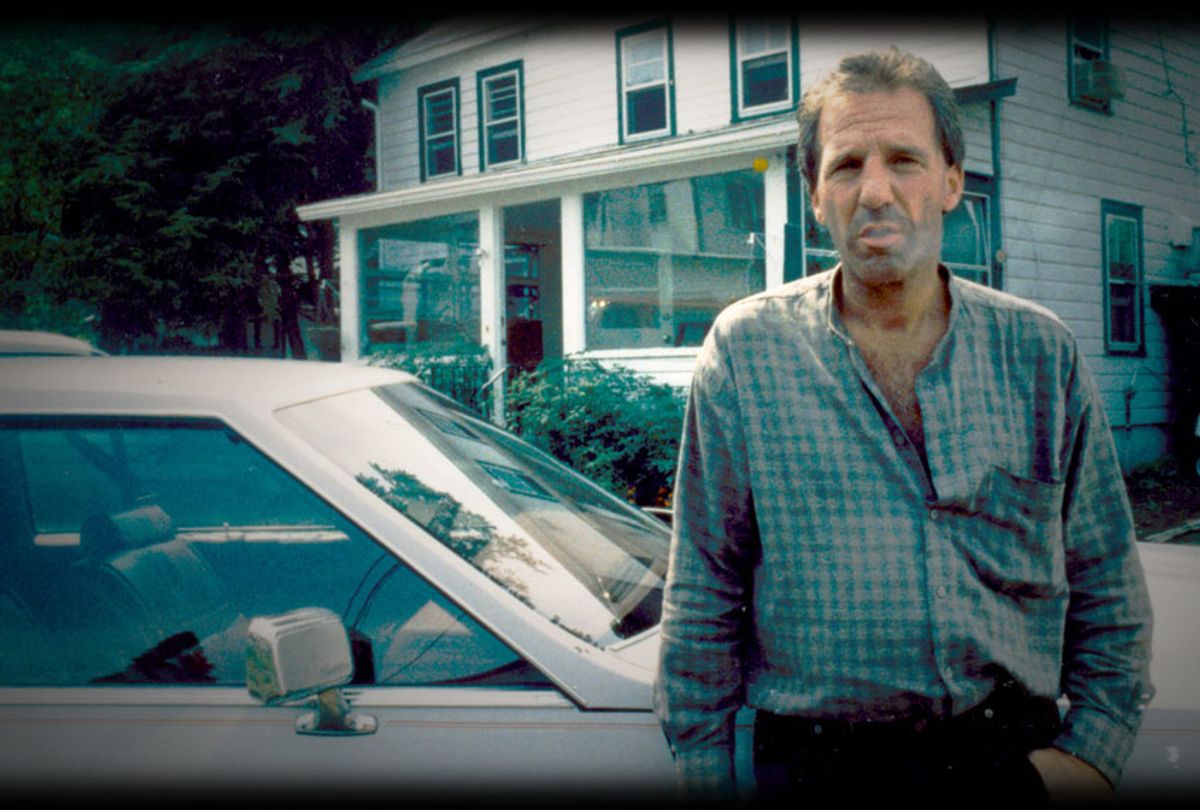 Richie Castellano in the documentary "Narrowsburg" (Narrowsburg/Courtesy of publicist)
--

Narrowsburg is a quaint little hamlet (pop. less than 500) in New York's Sullivan County, nestled along the Pennsylvania border and the Delaware Rive, about a two-and-a-half hour drive from Brooklyn. On Main Street, there's a bank and a post office; a Chinese restaurant, a car wash and a laundromat nearby. The residents describe it as "a nice place to live, but a hard place to make a living."

Martha Shane’s rollicking cautionary tale “Narrowsburg” recounts what happened to the sleepy little community back in 1998-1999, when actor Richard “Richie” C. Castellano (who had a role in “Analyze This”) and his wife Jocelyne swooped in with a plan to create a film festival and make a feature film locally (“Four Deadly Reasons”), and in the process turn Narrowsburg into the “Sundance of the East.” Long story short, money changed hands and disappeared.

According to a 2001 newspaper report, Richard Castellano pleaded guilty to four charges of attempted grand larceny in the fourth degree and was sentenced to a year in jail for "scamming local people out of several thousand dollars after taking the money to get them cards in the Screen Actors Guild (SAG). Castellano never delivered the SAG cards. And Sullivan County DA Steve Lungen started getting calls from people who wanted their money back."

Shane stumbled upon the story when she and a friend were pursuing the status of an unpaid equipment rental to someone at the Queens International Film Festival. The investigation led her down a rabbit hole where all the themes she wanted to explore crystalized in Narrowsburg.

“Narrowsburg” is highly enjoyable. Various locals, including Tom and Cecilia Coacci, who own the local car wash and laundromat, and former resident Zac Stuart-Pontier, who harbored acting dreams as Narrowsburg teen, describe their impressions and experiences with Richie and Jocelyne.

Shane chatted with Salon during the recent Camden International Film Festival in Maine where “Narrowsburg” had its world premiere. On September 20, the film will screen at the Big Eddy Film Festival (the renamed Narrowsburg Film Fest) alongside the 2002 feature “Four Deadly Reasons” — starring Castellano, produced by Jocelyne and filmed in the hamlet in 1999.

You tell this story of con artistry in a prismatic fashion, layering the reality with the dreams of Richie and the townsfolk. You create not a sense of ambiguity but raise questions about what folks believed and why. Can you talk about your approach to the material?

I was interested in exploring that line in between ambition and delusion and that question, “How do you know that you’re conning someone?” Are you giving them a dream to believe in? This is relevant to our current political state.

I never wanted to tell people what to think about these characters. I wanted to tell the story. I love when people ask, “Who do you think was responsible for what happened?” The film doesn’t give you easy answers.

We talked to a number of people who had nuanced views of what happened—Yes, I was conned, and a victim, but they gave me an incredible gift… Even people who lost the most money, when they talked about the Castellanos, and Richard in particular, they would light up with joy. They really liked him, and that hadn’t changed even given how badly it turned out.

What was interesting in making the film was that we were asking people about things 15 years after the main events in the film took place. We rewrite our personal histories about what we want to believe about ourselves and other people. They were able to rewrite their stories, and they remember things very differently. Richard remembers the climactic events of the film differently than the rest of the people I spoke to. Making the film shifted how I think about memory, storytelling and the nature of truth.

John Marchese suggests that while some folks suffered great losses, it is a good story, one that they can tell the rest of their lives. You’ve now told this story. How do you think this cautionary tale plays that such boondoggling won’t happen again?

I think that you can’t ever protect yourself from boondoggling. People get caught up in the story of [“Narrowsburg”] and think, “I might be more cautious,” but when someone looks in your eyes and promises something, or lays out their dream, the power of that is so overwhelming. It’s important not to be swept up in it no matter how cautious you are. You’d think that con artists would be more cautious, or that you might have some suspicion of others, but people are so incredibly vulnerable to that kind of moment. The power of that interaction — there is no way to protect yourself. It’s like falling in love.

There’s a suggestion in the film that Richie awakened the love of making movies for the residents. Despite all the bad things that happened, some good did come out of it.

I think people rewrite a story based on how it ended. Things fell apart but I don’t think how badly the way things ended should take away from the joy that existed at the time of making a movie on Main Street. That’s still a real experience, and I wanted to capture that.

But I had to finish my film. I couldn’t traumatize them again! Whatever curse that fell upon them in the late 1990s, hopefully will be lifted when I screen “Narrowsburg” this Friday.

“Narrowsburg” emphasizes the American Dream, not just in Zac’s aspirations to be an actor, the foreign-born Jocelyne’s love of Westerns and America, and Richie’s promise to make Narrowsburg the “Sundance of the East.” What can you say about these folks’ delusions, denial, deceptions and desires?

In a lot of ways, the film is about the allure and romance of filmmaking and film. These are dreams Hollywood has sold us over the past 100 years. If you are snapped up by Hollywood, fame and fortune would be yours. The bigger con is perpetrated by Hollywood itself. I watched every film Hollywood made about itself while making “Narrowsburg,” and it was interesting to see how that narrative has been crafted over the years. It is parallel to the American Dream, this rags to riches story. It reinforces its own power.

The film certainly addresses the issue of hubris, and how egos were stroked. I love actor Brian Vincent’s story of the film fest, and the realization that his "big break" was broken. What are your thoughts about the egos on display?

Brian’s amazing. When I first talked to him, he was someone who happened to be attending the film fest. He was a great storyteller. I was riveted. I love that he acknowledged that experience — knowing that something is a sham or con and being caught up in it nonetheless.

Even if a situation is constructed and fake in every way, it can be emotionally impactful for someone. That was what I wanted to explore in the film.

The clip of Pat Cooper’s speech at the Film Fest was arguably the most honest moment in the film. Can you talk about that?

We were incredibly lucky that people were filming during the film festival. A guy who played Richie’s stand-in in “Analyze This” shot that footage. It was amazing to see Pat Cooper do this classic roast and then you feel over time that even Richard is having this dawning sense Cooper is not kidding. It was so funny to see someone tell the truth in this tone that is so funny and recognizable that everyone was sort of on edge about how to interpret what he was saying. Everyone was laughing, but then everyone became more and more uncomfortable. I love that you’re not sure if you should laugh. This story is rife with moments like that. Is this funny, or sad, or dark? It can be all three at once.

I’m impressed that you were able to get interviews with Richie and Jocelyne as well as the various folks who were scammed by them. Can you talk about that?

Richie was the most difficult to find, actually, because everyone was after him for money and he was always on the run. His son agreed to be part of the film and he put us in touch. There was a process to build trust with him. He invited us for a meal and was generous and funny and I could feel his charm working on me. We had some conversations [about “Narrowsburg,”] and for Richard, it was the allure of being in a movie. He loved being in movies. We were making one, so he wanted to be a part of it. I remember he came to the interview and he brought a gun in a bag for “a meeting with a guy later.” I didn’t take this as intimidation — he was playing a character. There were things I expected he’d deny, but he didn’t deny them. He would reframe them. In his mind, these things he did [with other people’s money] weren’t crimes.

With Jocelyne, I wrote her a letter and she wrote back. I was surprised she wrote back. She included an email and phone number. She said the reason she was in the film was that her children convinced her that she needed to tell her side of the story. It was a way of putting the things to rest. I think it was an emotional experience for her to reconsider what happened.

What, if anything, do you believe of what the smooth-talking Richie and Jocelyne said? Is she related to the Hapsburg Dynasty? Was he a compulsive gambler? Were they malicious con artists or just victims of circumstance?

That’s the whole question of the film really. To this day, I still wrestle with that. That’s why I made this movie. I don’t know for sure, and there’s no way for me to prove those stories and details that they created about their own lives. It’s a human thing to make yourself bigger than who you are.