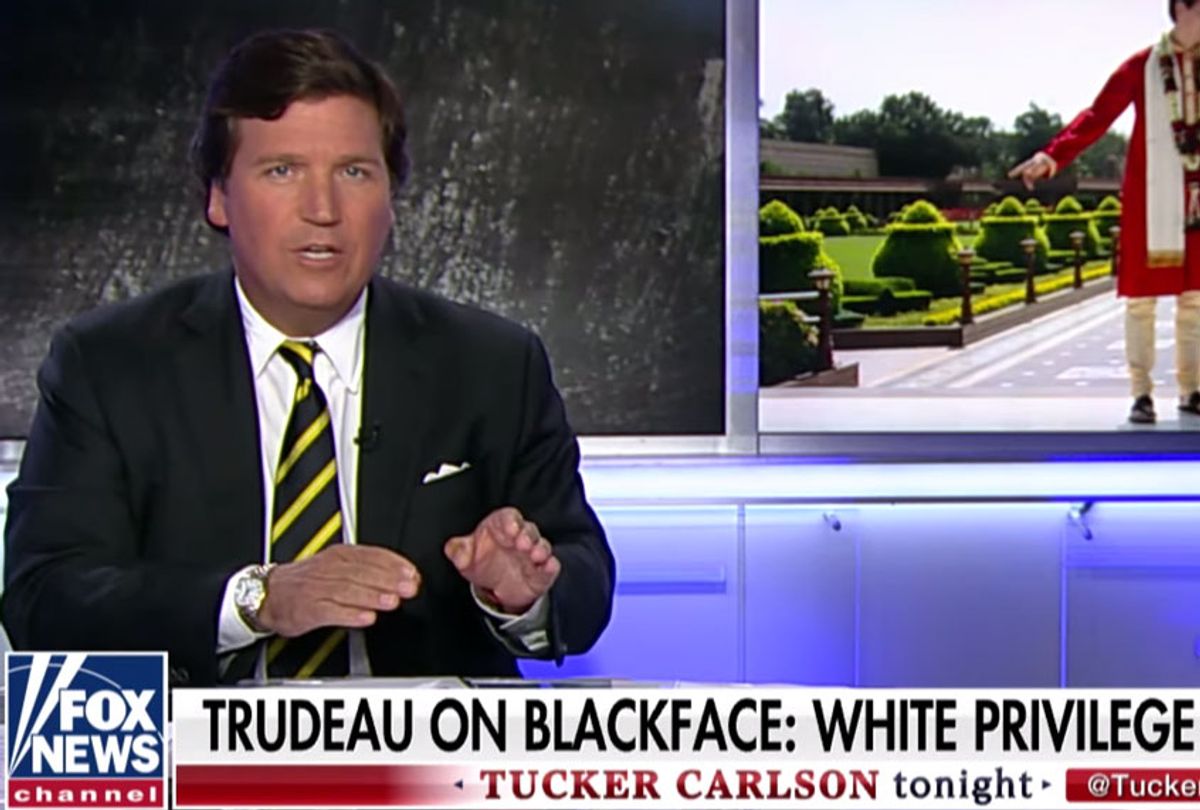 Fox News host Tucker Carlson claimed that Canadian Prime Minister Justin Trudeau acts "so sanctimonious" because he is secretly a "racist," as the world leader faces intense criticism after multiple image surfaces showing him in blackface and brownface between the early 1990s and 2001.

Carlson's comments, made Thursday night on his primetime show, came just after news broke that Trudeau had darkened his face on at least three occasions in the past. And the Fox News host alleged the revelations that the prime minister donned racist makeup on multiple occasions should not be surprising.

"It's a little like finding out your super sensitive brother-in-law — the one who tells you he's a feminist, the one who's always scolding you for your sexism — is, in fact, hitting on the babysitter," Carlson said.

"Of course, he's hitting on the babysitter," the Fox News host continued. "The virtue is always a cover for the sin. That's the key to understanding the modern left. Whatever they are accusing you of doing, they are doing themselves but more enthusiastically — and that's definitely the story of Justin Trudeau."

Carlson went on to argue that Trudeau, who has been admired by liberals around the world for his progressive policies, "may be the most sanctimonious head of state on planet earth, so of course he was leading a secret life as a racist."

"That's why he is so sanctimonious, so you won't notice," he added.

The Trudeau scandal spilled into public view earlier this week, after Time Magazine published a photo showing him wearing brownface makeup when he was a 29-year-old teacher at a school in British Columbia.

Since then, Trudeau has admitted to dressing up in blackface while performing "Day-O," the Jamaican folk song, in high school. His campaign also confirmed that a video posted by GlobalNews, a news organization based in Canada, showed the prime minister in the early 1990s dressed in blackface and an Afro wig.

"Darkening your face — regardless of the context, of the circumstances — is always unacceptable, because of the racist history of blackface. I should have understood that then, and I never should have done it," Trudeau said after the photos surfaced.

Trudeau has not clarified how many times he has worn blackface, saying: "I am wary of being definitive about this, because the recent pictures that came out, I had not remembered."

Carlson mocked Trudeau's apology, claiming Thursday that the liberal leader "suffers from an especially virulent case of something called 'privilege'" and is "moving responsibility for what he did from himself to the rest of us."

"It's not a confession — it's a justification — and the only people dumb enough to buy it are the news media, of course. The dumbest people in the world," Carlson added.

He then called out CNN host Don Lemon for applauding Trudeau's apology, pointing out that Lemon criticized former Fox News and NBC News host Megyn Kelly for suggesting that blackface was not racist.

At the time, Kelly said it was "OK" to put on blackface at Halloween when she was growing up "as long as you dressed up as a character." Kelly apologized for her comments amid widespread backlash, but NBC News axed her namesake 9 a.m. hour of the "Today Show."

Carlson attempted to juxtapose Lemon's response to Trudeau's apology to the one made by Kelly.

"When someone apologies — wow," Lemon said of the prime minister. "We don't often see that here. Especially a world leader who's saying, 'I should have known better, and I'm sorry.' You could go about that however you want. But, to me, that does mean a lot."

After showing a clip of Lemon's response, Carlson said, "What a difference a year makes. If you can remember back — all the way back — to when Megyn Kelly of NBC found herself under attack in pretty much the same way. The difference was that Megyn Kelly never wore blackface."

"She wouldn't do that. She's not Justin Trudeau," the Fox News host continued. "She just made the mistake of not seeming quite offended enough in a TV segment by certain Halloween costumes. For that crime, Don Lemon told us, she must be destroyed."

On Oct. 23, 2018, as Kelly's blackface remarks were receiving widespread media attention, Lemon said in a handoff from lead-in Chris Cuomo that Kelly needed to educate herself on being in a position of privilege.

"Megyn is 47 years old. She's our age. There has never been a time in that 47 years that blackface has been acceptable," Lemon said at the time. He also questioned "how much diversity" Kelly had on her staff, “because people would have informed her."

Carlson questioned Thursday if Lemon underwent a "change of heart."

"Suddenly, Don Lemon went from that, 'I wonder how much diversity she has on her staff,' to 'I'm so glad that Justin is sorry,'" he said. "Did Don Lemon have a change of heart? Is he now a forgiving man? Or could it be that because Justin Trudeau is a powerful leader on the left, he gets a pass no matter what he does?"

"I think you know the answer," he said.

Carlson’s support of Kelly comes one month after the Fox News host was widely condemned for racist comments in which he falsely claimed that white supremacy a “hoax” that was “not a real problem” after the mass shooting in El Paso. Salon has reached out to Fox News for comment about his last remarks.