Law, be a lady: "Stumptown" leads the new squad of TV women fighting for justice

"All Rise," "Emergence," "Bluff City Law" and "Stumptown" show sisters doing justice for themselves — and us 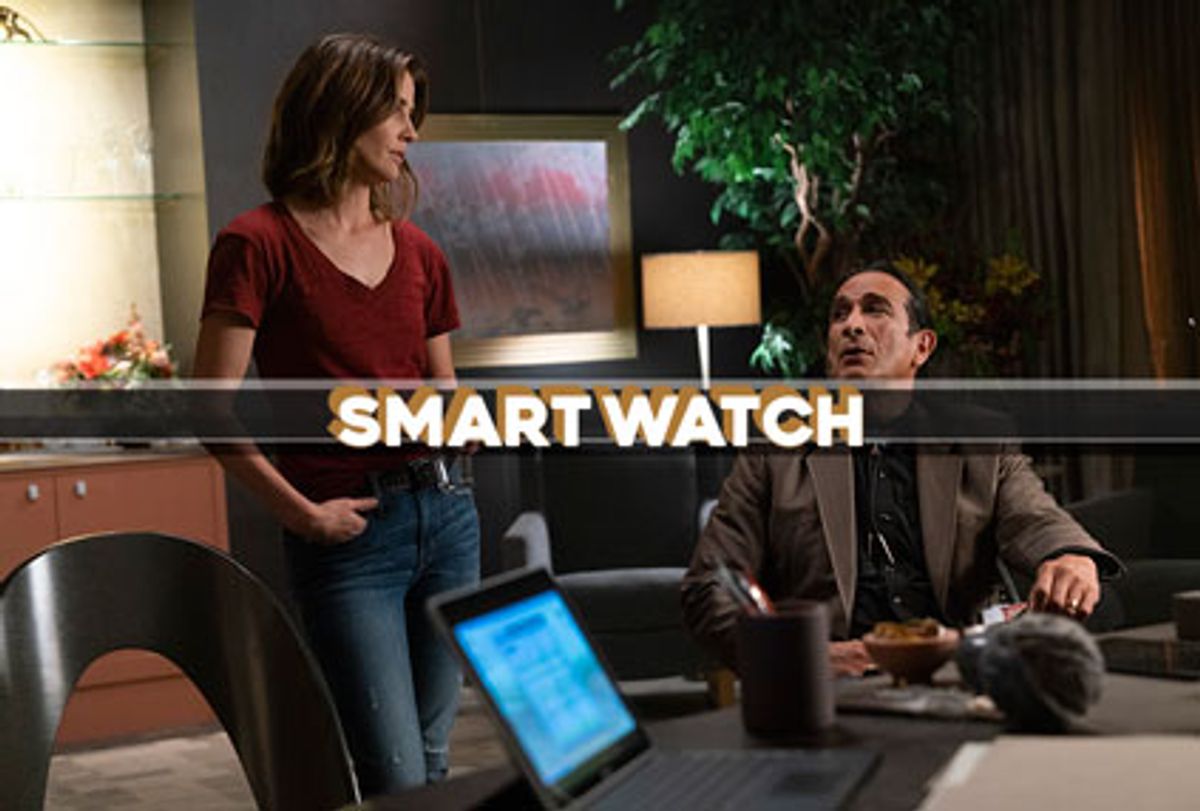 Dex Parios – a strong, assertive and sharp-witted army veteran with a complicated love life, gambling debt and a brother to take care of – works as a PI in Portland, Oregon. With only herself to rely on, she solves other people’s messes with a blind eye toward her own, finding herself at odds with the police and in the firing line of criminals, on the series premiere of “Stumptown,” WEDNESDAY, SEPT. 25 (ABC/David Bukach)
--

The classic image of Lady Justice depicts her as blindfolded, meant to symbolize the objectivity and impartiality of the law. In 2019, for many reasons, that image looks downright depressing.  A year ago Brett Kavanaugh was named to the Supreme Court despite credible claims of sexual misconduct in his past.

Two years ago, #MeToo caught fire and has been downgraded from cleansing revolutionary storm into inconvenient irritant. As usual, where reality struggles to deal with women’s insistent calls for equal treatment and recompense for survivors of assault and abuse, new TV shows are ready to leap into the chasm with heroines who meet corruption and inequity head on, who are there to kick society’s ills square in the jingles. It’s prime time for payback, son!

No character personifies this as excitingly as Cobie Smulders’ Dex Parios, a hard-drinking ex-military intelligence officer at the center of “Stumptown,” scraping by as private eye in Portland, Oregon. Dex excels at getting herself into tight spots and punching her way out of them, and to demonstrate that idea the series premiere’s calling card is a messy smackdown that takes place inside of a speeding car.

Smulders plays this scene and every other physical confrontation without a lick of pretty. She’s an imprecise fighter, takes knocks and gives them back harder. Often she wins in the end, but getting to the knockout leaves a lot of bruises and cuts.

“Stumptown” is based on a graphic novel series created and written by Portland's Greg Rucka. Smulders, though, is the name that sells it. People who know her from “How I Met Your Mother” and “Friends From College” may be surprised to see her playing a roughneck and nailing it; moviegoers who know her from the Marvel Cinematic Universe will be delighted to watch Robin Sparkles emphatically lean into the action side of her dramatic repertoire.

Dex does what she needs to in order to protect the people she loves, namely her brother Ansel (Cole Sibus), who has Down Syndrome. Dex cares for Ansel with the help of her friend Grey (Jake Johnson). Handily enough Grey is opening his own bar where Dex can numb her pain.

Smulders makes Dex an engaging character by wearing her imperfections on her sleeve and in the worry lines of her face. Dex’s gambling addiction forces her into the service of the casino boss she’s indebted to, Sue Lynn Blackbird (Tantoo Cardinal, giving the second best performance of the show), whose first order of business is to find her missing granddaughter.

Like all other hero private detectives, Dex employs her vigilante services to assist the local cops, including Lieutenant Cosgrove (Camryn Manheim) and Detective Miles Hoffman (Michael Ealy), who is as fascinated by Dex as he is resigned to knowing she’s immune to any warnings he throws at her.

He knows the legal system has loopholes that prevent him from taking certain measures that Dex freely employs, and that’s what makes “Stumptown” one of fall’s most satisfying rides. Smulders’ Dex represents every woman who excels at getting the job done because nobody else can, or will. In an ideal world, we’d love to possess half of her leathery toughness. In lieu of that, let's enjoy watching her work.

In Allison Tolman’s break-out performance in the first season of “Fargo,” she plays a cop fighting for respect in her small town’s department. She’s played a number of parts since, including the lead of ABC’s gone-too-soon midseason comedy “Downward Dog,” but there’s a comforting familiarity to seeing her return to a regular series as a small town police chief.

Only this time her cop, Jo Evans, is placed in the role of surrogate mother instead of dutiful daughter, tasked with figuring out the identity of a girl (Alexa Swinton) who has no memory and can’t explain why strange things, including power surges, seem to be happening around her.

Obviously “Emergence” is another try at filling the supernatural mystery void left by “Lost,” which debuted 15 years ago on ABC and continues to influence scripted series across the medium. And while it’s impossible to tell whether this series will catch on in a way that others haven’t, the cast is wonderful. Tolman is joined by Clancy Brown as her father Ed, Donald Faison playing her ex-husband Alex, with whom Jo has a daughter, Mia (Ashley Aufderheide), who quickly takes to the mysterious girl they decide to call Piper.

Also remaining to be seen is how tangled the plot will become as the mystery of Piper’s identity is soon revealed. That said, having “Agent Carter” executive producers Michele Fazekas and Tara Butters at the helm of “Emergence” is encouraging enough to recommend giving it a few episodes, and who doesn’t like a story about a girl with tremendous superpowers?

The felling of CBS top executive Les Moonves remains one of the #MeToo movement’s hugest victories, although stories about misconduct and discrimination continue to emerge after his departure. In this light “All Rise” is a hard and intentional pivot for the network, the story of a newly minted judge, Lola Carmichael (Simone Missick, fresh off of “Luke Cage”), whose emphatic mission is to refuse to maintain the status quo.

Within the first episode she declares that her purpose is to represent people who look like her that aren’t usually elevated to the judge’s chair, and slows down what seems to be an open-and-shut case involving a Latina accused of a burglary who vehemently insists that she’s innocent.

This may read as highly dramatic, but its producers write the dialogue exchanges between the principal characters with a lot of snappy wit and attitude that Missick, for her part, tempers admirably. Marg Helgenberger returns her as an adversary in the police department, with Jessica Camacho standing out as an overly eager new public defender. The interesting twist in the ensemble formula is to place Wilson Bethel in the role of Lola’s confidante Mark Callan, a white male lawyer who provides Lola with a shoulder to cry on. All of this feels very intentional in the opening episode, but rarely does a premiere adequately show what a series eventually becomes.

As it stands, this courtroom drama has the feel of the kind of show CBS develops well, a lightly serialized episodic diversion structured around open-and-shut cases and carried by a solid lead. Missick is a compelling performer, and hopefully the network will give her show enough time to smooth out the more forced elements.

Starting a pilot with a woman emitting a primal scream into a mirror is oh so 2019, isn’t it? The banshee in question is Sydney Strait (Caitlin McGee), a brilliant lawyer who used to work with her father Elijah (Jimmy Smits) until she got tired of finding out about his philandering.  When we meet Sydney she’s working for the dark side, a corporate lawyer specializing destroying anyone who dares to bring litigation against her corporate clients.

But when her mother dies, Elijah persuades Sydney to come back — not for his sake, but to use the fighting skills she’s honed in the service of industrial evil to help litigants facing no-win cases. As it turns out, she’s pretty good at championing the little guy. At the same time, her father’s failings fall right into her lap on a regular basis, making it difficult to forgive him.

The crusading civil attorneys angle enables “Bluff City Law” to feel different and hopeful, a nice contrast to the Dick Wolf courtroom-style drama that dominates TV. Smits has been an easy sell since his “L.A. Law” sex symbol days, and the series works to play to the audience’s natural affection for him to counteract McGee’s dissonant terseness. But the rest of the ensemble helps to ameliorate the brew, particularly the excellent Jayne Atkinson, Barry Sloane and MaameYaa Boafo.

Like many new series, this is a drama that isn’t entirely cooked, but it could be a decent stew by midseason. Besides, in this climate, betting on a drama where the good guys, led by a woman, fight for the world’s underdogs and win isn’t the craziest strategy. It doesn’t make up for the real world’s crimes, but at least it provides a comforting vision of what justice could look like.