Mike Pompeo: Biden should be investigated if he thwarted Ukraine probe of his son 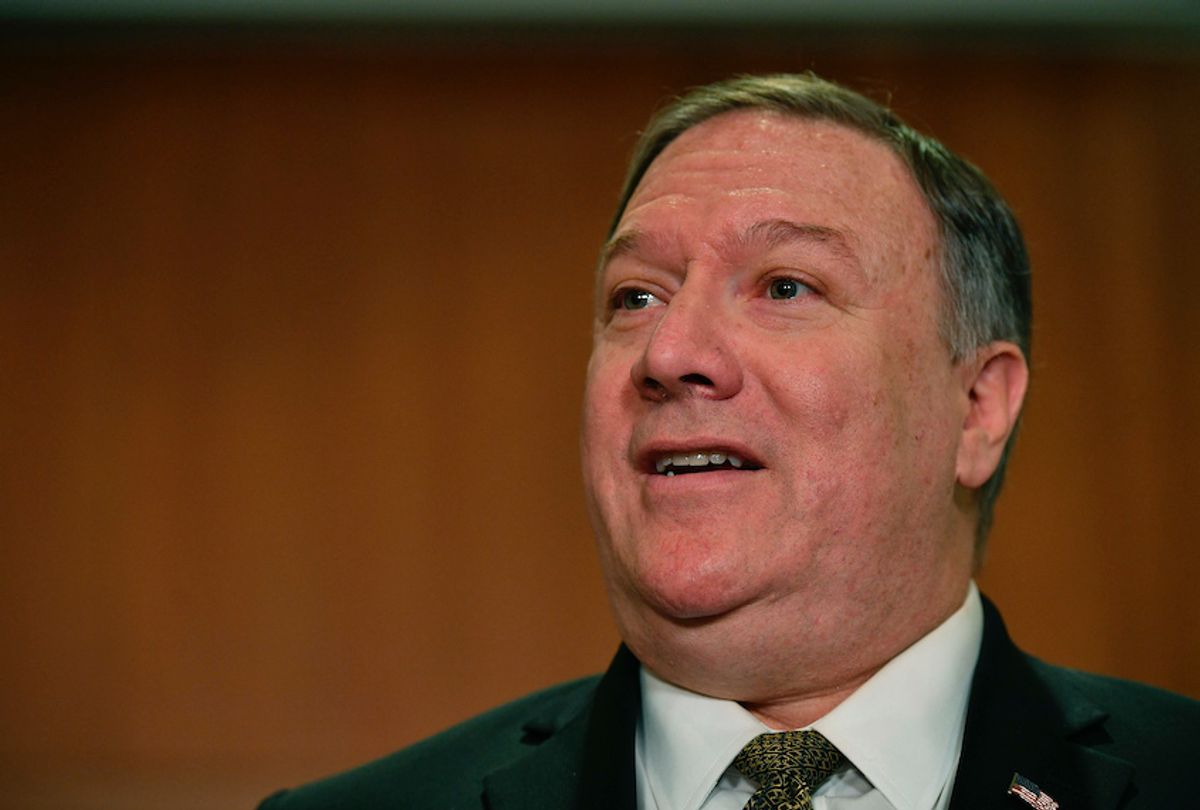 US Secretary of State Mike Pompeo talks to the press on the sidelines of the Arctic Council ministers' working dinner at the Arktikum museum in Rovaniemi, Finland on May 6, 2019. (Photo by MANDEL NGAN / POOL / AFP) (Mandel Ngan/Pool Photo via AP)
--

"If Vice President Biden behaved inappropriately, if he was protecting his son and intervened with the Ukrainian leadership in a way that was corrupt, I do think we need to get to the bottom of that, Martha," Pompeo told ABC News host Martha Raddatz on Sunday. "And I hope that we will. I hope that, if Vice President Biden engaged in behavior that was inappropriate, I hope the American people will come to learn that."

Pompeo was referring to reports that Trump had attempted to pressure the government of Ukraine into divulging dirt about Biden, in particular whether he had sought to have a prosecutor compelled to resign in order to thwart an investigation into his son, Hunter Biden. There is no evidence that Biden's son was under investigation from the Ukrainian government or that Biden's actions in Ukraine had anything to do with his son's business ties there, but this hasn't stopped Trump from promoting that conspiracy theory even as he evades reports that in August an intelligence official blew the whistle on Trump making a "promise" to Ukrainian President Volodymyr Zelensky in one of their private conversations. On Saturday he tweeted that "nothing was said that was in any way wrong, but Biden’s demand, on the other hand, was a complete and total disaster. The Fake News knows this but doesn’t want to report!" Other right-wing operatives and Trump associates, including former New York City Mayor Rudy Giuliani, have also promoted unfounded conspiracy theories regarding Biden and Ukraine.

Pompeo also doubled down on his hawkish rhetoric toward Iran, telling Margaret Brennan of CBS News' "Face the Nation" that he had no doubt Iran was behind a controversial attack on Saudi Arabia.

"No reasonable person doubts precisely who conducted these strikes," Pompeo told Brennan on Sunday. "And it is the intelligence community's determination that is likely the case that these were launched from Iran."

After denying that Yemen's Iran-backed Houthi rebels had the technological ability to carry out the attack on the Saudi oilfields, even though the Houthis have claimed credit for it, Pompeo insisted that "it is literally nuts on its face to make an assertion that this was an attack by the Houthis" and argued that "the United States will respond in a way that reflects that act of war by this Iranian revolutionary regime."

When Brennan asked him to clarify that he was saying Iran launched the attack, Pompeo replied that "this was an attack by Iran on the world. This was an act of war. I'm here at the U.N."

When Pompeo first blamed Iran for the attacks earlier this month, Iranian Foreign Minister Javad Zarif responded by tweeting that "having failed at 'max pressure', @SecPompeo's turning to 'max deceit.' US & its clients are stuck in Yemen because of illusion that weapon superiority will lead to military victory. Blaming Iran won't end disaster. Accepting our April '15 proposal to end war & begin talks may."