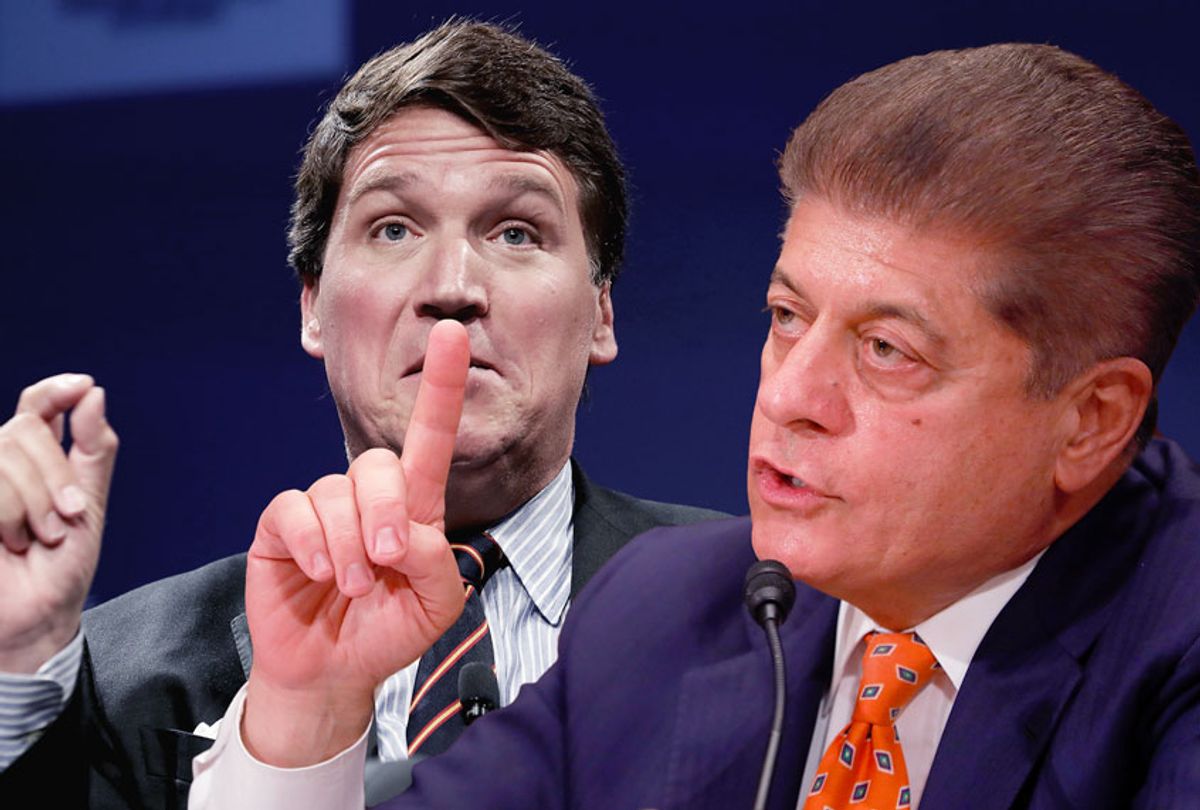 A feud between the news and opinion sides at Fox has continued to play out live on the airwaves of the infamously conservative-leaning news network.

The battle broke out Tuesday after the network's legal analyst Andrew Napolitano told its news anchor Shepard Smith that President Donald Trump's own admissions of his interactions with Ukraine constituted "a crime."

“Attacking our colleague who is here to offer legal assessments on our air, in our work home, is repugnant," Smith retorted on air the following day.

Carlson then invited DiGenova back to his show in a so-called effort to "educate" Napolitano. The opinion host also used the opportunity to make the false claim that unlike the dayside hosts on Fox News, he was "not partisan."

"I — if he wants to have an opinion, that's fine. I am not a paid Fox contributor," he continued. "I am a guest of Fox network. I come on when they ask me."

Napolitano, who has described himself as a libertarian, in fact told Salon last year that he had managed to maintain a close friendship with Trump despite frequently criticizing what he felt were unlawful activities from the White House.

“I have not hesitated to write — if you look at my column from two weeks ago — that much of the division in the country is caused by the choice of his words — by him and his demeanor," Napolitano said at the time. "But my friendship persists. I mean, you have to ask him why he still calls me.”

Nonetheless, without calling out Smith by name, Carlson sought to cast his colleague’s show as “not news” but “opinion.”

However, Carlson's claim that Smith has conducted himself like an employee of the opinion side of the network rather than the news division directly contradicts what his Fox News colleague, who made a concerted effort to champion the separation between the two groups, told Salon earlier this year.

“When it comes to the news side of FNC, it’s sometimes tough for some people who don’t watch Fox to realize there is an opinion side and a news side of the house," the news anchor Bret Baier told Salon in January. "So when it takes me 592 days to get President Trump to sit for an interview and a little longer for Chris Wallace, some people just paint with a broad brush and lump us all together. The president has appeared frequently on many of our opinion shows."

Salon also spoke with Carlson in January. During that interview, the Fox News pundit said he believed that “we talk too much and think too much about Trump” — and he felt news outlets should refrain from doing so. At the time, Carlson also claimed that the supposed fixation on Trump was “a way to wade past the actual conversations, which are uncomfortable about who is getting rich and who is not.”

“In that script, and on my show more generally, I really try to be like the one place where we don't have to talk about Trump for an hour," Carlson said. "Not because it's like some political decision I've made — it's not— but because I just don't think it's that interesting.”