Was Trump ready for prime time at U.N.?

Brazil’s president certainly was not 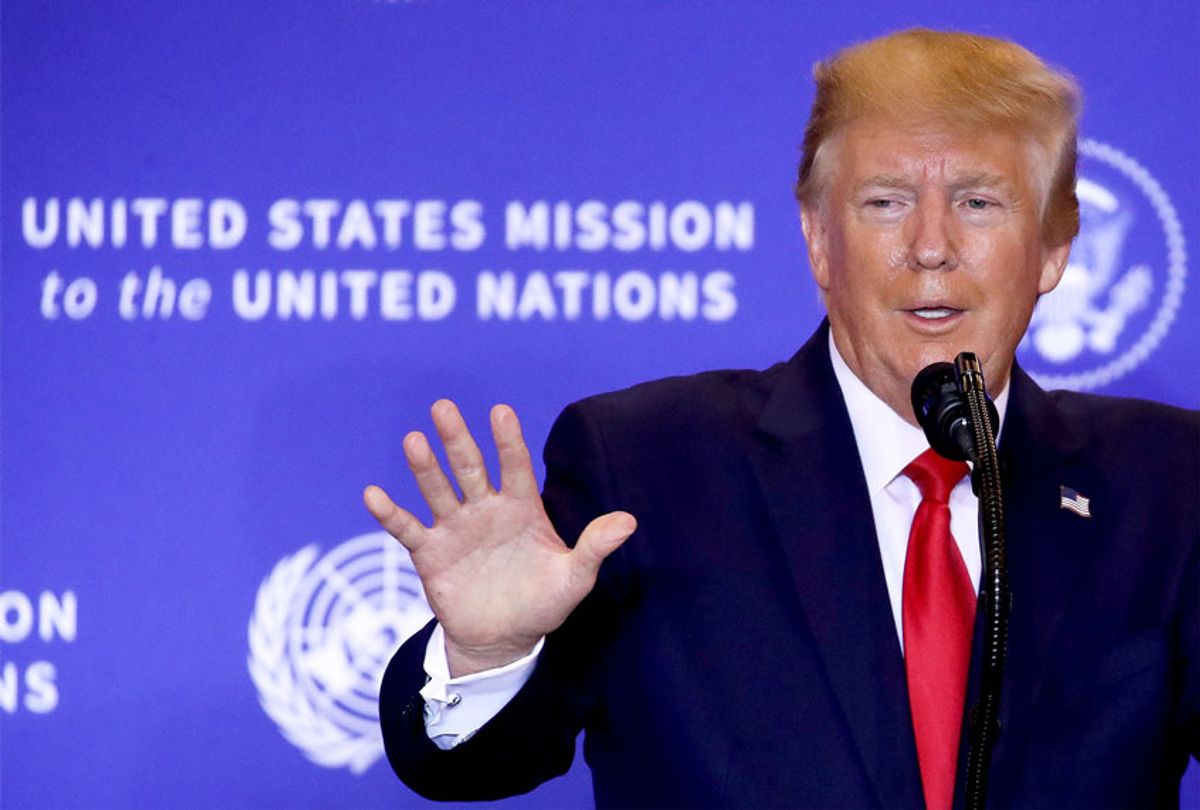 Each year UN delegates at the annual General Assembly high-level session eagerly await what an American president, head of the richest country in the world, has to say at the world’s largest forum of global leaders.

This year President Donald Trump looked bored with his own speech, filled with insults to what the world body hopes is its mission: multilateral cooperation, a struggle to care for migrants and equality. It was a good address for his domestic base.

He singled out China for what he called unacceptable trade practices and then launched into a criticism of Iran, the culprit of everything wrong with the Middle East.

Still, Trump’s speech seemed not ready for prime time, but he did notice accurately that the Democrats in Congress, by calling for impeachment proceedings, rained on his UN parade.

All questions in the corridors concerned Representative Nancy Pelosi’s call for impeachment because of his dealings with Ukraine. This was also reflected in broadcasts on BBC World, France 24 and CNN.

Never missing a chance to rain scorn on “globalism,” Trump told the United Nations: “If you want freedom, take pride in your country. If you want democracy, hold on to your sovereignty. And if you want peace, love your nation.”

Yet, when it involves Iran, Trump and his secretary of state, Mike Pompeo, are eager to enlist support from UN members, especially the 15-seat Security Council.

Iran needs to be punished

A majority of UN members disapprove of Trump’s rejection of the carefully negotiated 2015 deal to prevent Iran from producing a nuclear weapon. But Iran’s provocative response to this action has lost some support.

France, Britain and Germany blamed Iran for attacks on oil facilities in Saudi Arabia. (Iran’s articulate Foreign Minister Javad Zarif put the blame on Yemeni rebels,saying, “If Iran were behind this attack, nothing would have been left of this refinery.”)

While Trump said he was willing to talk with Iranian President Hassan Rouhani, no meeting has been set. Alluding to North Korea, Trump said, “America is ready to embrace friendship with all who genuinely seek peace and respect.”

He said he did not want war, but additional sanctions would be imposed on Tehran.

On climate change, Trump boasted that America was now the largest producer of oil and natural gas anywhere in the world. At a high-level weekend UN conference on climate change, phasing out fuel that emits carbon dioxide was a key ingredient.

Many diplomats spoke about climate change. For example, Croatia’s president, Kolinda Grabar-Kitarović, devoted her entire address to the issue, speaking in flawless American-accented English. The same was true for Chilean President Sebastián Piñera, whose country will host in December the next UN Climate Change Conference, known as COP25.

Reacting to Trump’s speech, French President Emmanuel Macron said patriotism was important, but “turning inward” did not produce results. He also said trade should be crucial for climate change, such as eschewing products produced with damage to the planet.

Watch out for do-gooders

On refugees, Trump castigated those who defended migrants as “open border activists” who justified their actions by speaking of social justice. He did not distinguish between migrants and refugees or those fleeing injustice for a safe haven.

And he denounced “socialism and communism” as “power for the ruling class.”

At a luncheon with UN Secretary-General Antonio Guterres, Trump spoke about how the two had become friends. Yet Guterres for years was the head of the UN refugee agency and before that the democratically elected socialist prime minister of Portugal and the leader of the Socialist International.

Trump followed the president of Brazil, Jair Bolsonaro, who made his maiden speech at the United Nations and certainly was not ready for prime time.

Bolsonaro denied he had any role in razing the Amazon forest for commercial interests or causing enormous fires that touched many countries.

“Our Amazon rainforest is larger than Western Europe and it remains virtually untouched. This shows that we are one of the countries that protects the most its environment,” he claimed.

Amnesty International immediately thundered back, saying: “The devastating number and scale of fires in the Amazon this year confirmed the harsh reality faced by Indigenous peoples and other inhabitants of the rainforest. President Bolsonaro failed to make clear how exactly Brazil will protect them.”

Peru’s president, Martin Vizcarra Cornejo, made clear that six countries in the region had organized to “address challenges” from the fires in the Amazon and protect forests.

Bolsonaro also laced into the nearly 10,000 Cuban doctors deployed to help in poor and remote areas in Brazil, saying they should have had certain medical qualifications and that most of their wages were confiscated by the Havana government. Cuba pulled back most of the doctors because of Bolsonaro, and Brazil now has scant medical services in those areas.