"There are truly no words that can describe how insidious and deleterious this is," said one Arizona lawmaker 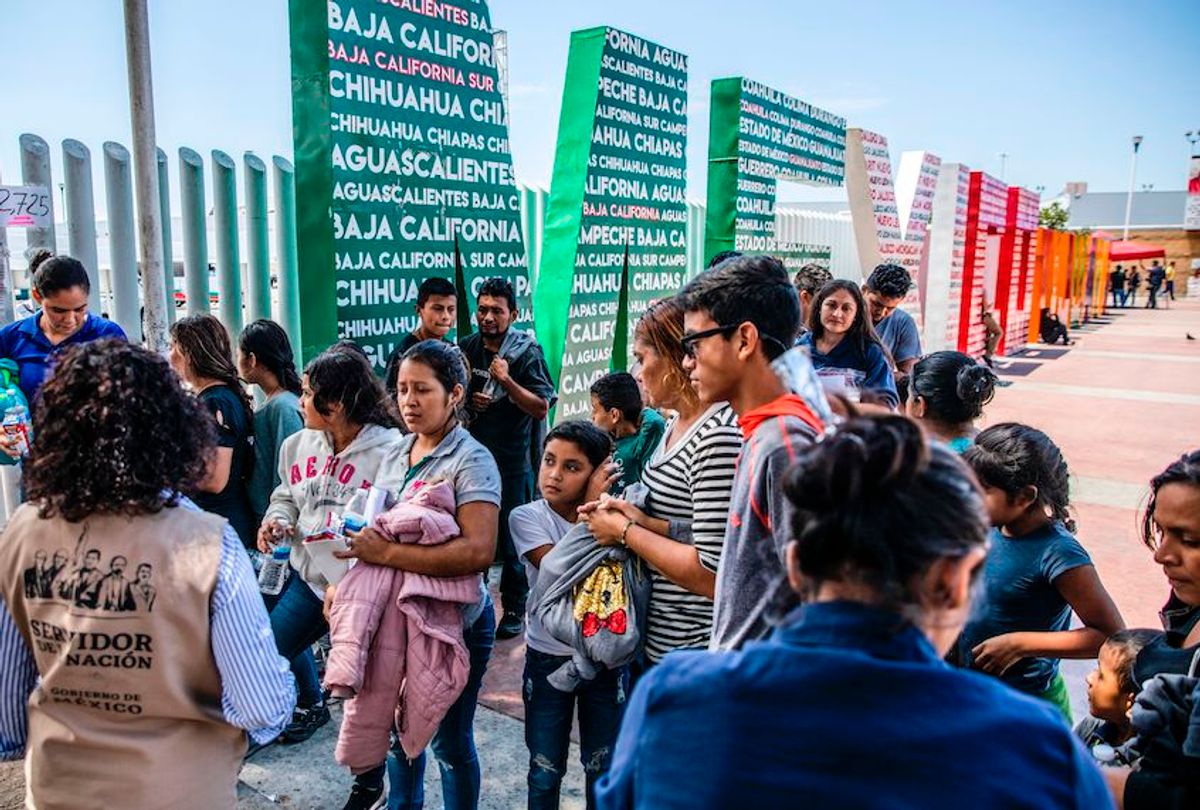 Central American migrants, part of a group of 87 people deported from US, gather at the El Chaparral border crossing before being transported to a shelter in Tijuana, Mexico, on July 22, 2019. - According to Mexican Foreign Minister Marcelo Ebrard, authorities of Mexico and US will meet in 45 days in Washington to evaluate again the efforts of Mexico in the fight against illegal immigration in the US southern border. (Photo by Eduardo Jaramillo Castro / AFP) (Photo credit should read EDUARDO JARAMILLO CASTRO/AFP/Getty Images) (Eduardo Jaramillo Castro/AFP/Getty Images)
--

In what rights groups condemned as a move driven not by America's capacity to resettle those fleeing violence and persecution but solely by President Donald Trump's hate-filled political agenda, the State Department on Thursday said the U.S. will accept no more than 18,000 refugees over the next fiscal year.

The cap marks an all-time low since the U.S. refugee admissions program was established in 1980. The previous low of 30,000 was set by the Trump administration last year.

Trump on Thursday also signed an executive order that would empower states and localities to refuse to resettle refugees.

"To cut the number of refugees the U.S. will accept to this low of a number reflects nothing more than this administration's attempts to further hate, division, and prejudice in a country that once valued dignity, equality, and fairness," Ryan Mace, grassroots advocacy and refugee specialist at Amnesty International USA, said in a statement.

"Sadly, this number isn't based in fact," said Mace. "The fact is, the U.S. has the capacity to accept far more refugees than this. We know that we can vet them and resettle them at rates far higher than this—because the U.S. has done it for decades. This is purely a political decision, and one that couldn't come at a worse time. The president is abusing his power by using people seeking safety as an opportunity to rile up hostility and create a climate of fear."

The "unprecedented reduction in admissions" for fiscal year 2020 represents the third consecutive year the Trump administration has dramatically lowered the number of refugees allowed to enter and resettle in the United States. In July, as Common Dreams reported, Trump administration officials privately floated the possibility of cutting the refugee cap to zero.

According to Politico, which obtained a document on the administration's new refugee cap, "the 18,000-person refugee ceiling contains several carveouts":

The administration will reserve 5,000 slots for refugee persecuted on the basis of religion, and 4,000 spaces for Iraqis who assisted U.S. forces in that country. Another 1,500 refugee placements will be set aside for residents of Guatemala, El Salvador and Honduras, according to the document.

After the carveouts, the administration will make another 7,500 spaces available to the remainder of the refugee pool. The document shared with lawmakers said that group could include referrals from U.S. embassies, refugees joining family members and refugees to be resettled as the result of an Obama-era agreement with Australia.

David Miliband, president and CEO of the International Rescue Committee, said in a statement that the Trump administration's refugee limit represents "unspeakable setback for refugee mothers who wish to see their children in school, parents who wish to work and support their family, and children who deserve a chance at life that isn't solely defined by the instability and the trauma of their childhood."

"This is a very sad day for America," said Miliband. "Refugee resettlement is an essential lifeline that the U.S. provides for the most vulnerable refugees at a time of unprecedented global crisis."