From Jenny Slate and David Chang, to a Mexican-inspired anime and a sumo minidoc, this fall has it 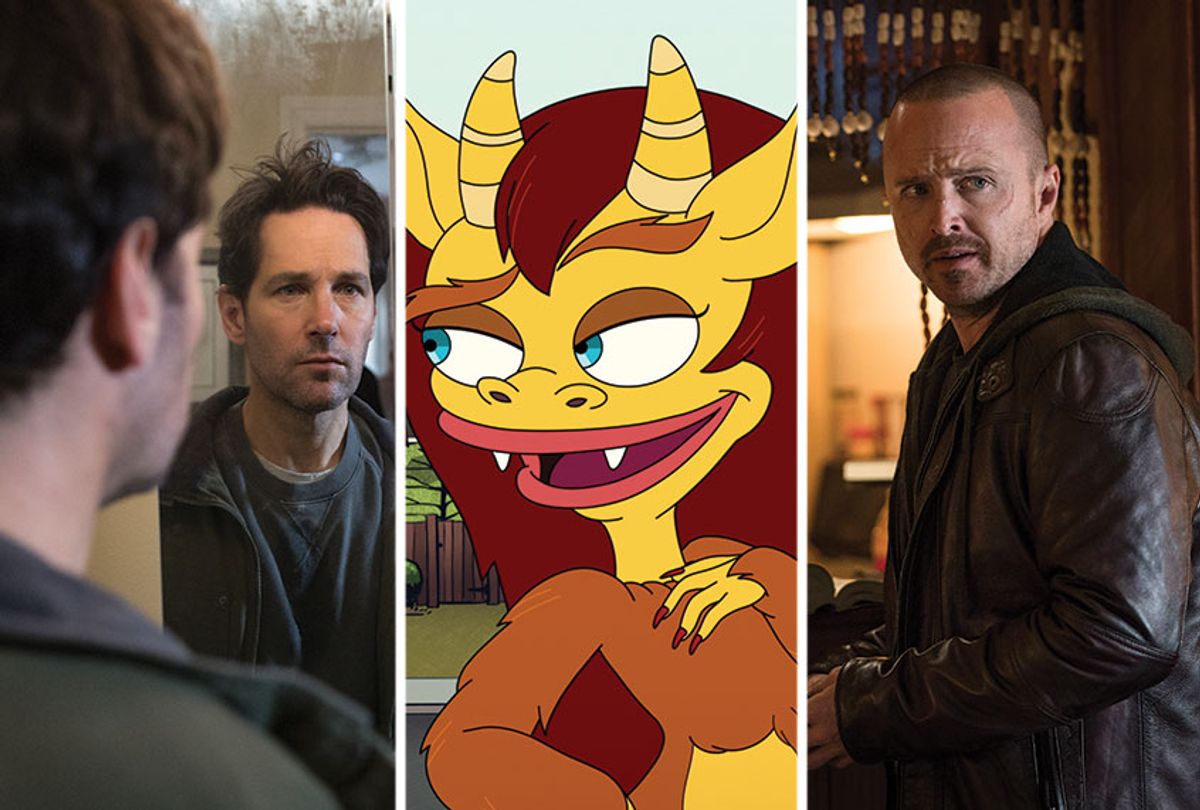 It’s officially fall, which means it’s now the season to eschew the — in most cases across the US — unseasonable sunshine and get reacquainted with your couch before winter. While there, enjoy these new and returning Netflix shows and movies that will premiere in October, including the much-anticipated “Breaking Bad” movie, a sumo wrestling mini-doc, Paul Rudds (yes, plural), and the return of celebrity chef David Chang.

If you’ve never seen “Big Mouth” before, the Netflix synopsis of the upcoming season is a whole lot. Show creators plan to tackle “cellphone addiction, female anger, the vast spectrum of sexuality, Adderall abuse, dick pics, toxic masculinity, and of course, ‘how to have an  orgasm.’”

This obviously isn’t after-school special material, but the raunchy Netflix animated original — created by Nick Kroll, Andrew Goldberg, Mark Levin and Jennifer Flackett — has excelled in past seasons at depicting the hellscape that is puberty with an unusual level of smarts, sensitivity, and insightful humor.

When we last left the characters in the holiday musical episode “My Furry Valentine,” things were pretty bleak for fan-favorite Andrew Glouberman. He’s allergic to his new red Kangol hat; his scalp has broken out into a “profoundly violent rash.” His relationship with Missy (Jenny Slate) has taken a downturn — enough so that one of his Valentine’s ideas for her is balloon that reads “For Christ’s sake, please.” He makes a fool out of himself at a party and in the final moments of the episode, we leave Andrew in the street, angry and humiliated.

I’m hopeful Season 3 may bring a certain level of redemption for Andrew — potentially with the help of the cast of “Queer Eye,” who are featured in this season?

“Breaking Bad” dramatically concluded in September 2013, and since then, fans have speculated that a movie was in the works. There have been rumors, there’s been disappointment, there have been teasing Instagram photos from Aaron Paul and Bryan Cranston. But the project was unconfirmed until August 2019, when Netflix finally released a trailer.

“El Camino” picks up where “Breaking Bad” left off.  Jesse Pinkman has escaped his captors and is on the run from law enforcement. According to creator Vince Gilligan, more than 10 characters from the original “Breaking Bad” will appear in the film.

Netflix is getting into the musical competition game with “Rhythm + Flow,” an unscripted series that follows Cardi B, Chance the Rapper, and Tip “T.I.” Harris as they search for the country’s next great hip-hop talent. In a departure from the streamer's usual binge drop, the show will premiere on Oct. 9, followed by different episode bundles dropping each Wednesday throughout the month. Week 1 features the auditions; Week 2 covers cyphers, rap battles, and music videos; and Week 3 concentrates on samples, collaborations, and the big finale, when a new hip-hop star will be crowned.

To prep for the premiere, I’d recommend catching a few episodes of Netflix’s “Hip-Hop Evolution,” which traces the genre's roots and development.

Can there ever be too many Paul Rudds? That existential question will be explored in the bizarre new dark comedy on Netflix, “Living with Yourself.” In it, Paul Rudd plays a sad dude who wishes he could be a better person. Through a series of events, he ends up in a science fiction-esque spa, wherein he creates a clone of sorts, who exhibits different sides of his personality. Over the eight-episode series, shenanigans ensue.

Season 4 of “Schitt’s Creek” brought all the feels — and many, many worthwhile GIFs. There was the episode “Open Mic,” which brought us Noah Reid’s tear-jerking cover of “Simply the Best.” Alexis and Ted finally make things right. Moira made sure Johnny Rose had a merry Christmas.

Season 5, which was nominated for four Primetime Emmys (including Best Comedy Series), will pick back up with Canada’s favorite family — played by Dan Levy, Eugene Levy, Catherine O’Hara and Annie Murphy — on Oct. 10.

In a 2017 interview with Sam Jones, Jenny Slate spoke candidly about the after-effects of getting fired from "Saturday Night Live" in 2009. “I was so humiliated in every way,” she said. “And I thought that everybody cared. I couldn’t get over it. I was too sensitive and when I got up on stage I just felt like everybody hates me.” It led to a pretty severe bout of stage fright, which makes the title of her stand-up special a nice, little subversive move.

Netflix brings the actor's first stand-up special, which has been classified as “dark comedy.” It’s a hybrid stand-up set, bolstered by a documentary-style look at her family and upbringing.

This Selena Gomez-produced docuseries follows eight families who face deportation in the United States. It’s an effort to put faces to the ongoing immigration debate in the country, which shows no signs of slowing as the 2020 election nears.

In an interview with “The Hollywood Reporter” Gomez said she chose to produce the series because, over the past few years, the word “immigrant” has become a negative word.

“My hope is that the series can shed light on what it's like to live in this country as an undocumented immigrant firsthand, from the courageous people who have chosen to share their stories,” she said.

This has been a good year for unique Latinx-led television, with shows like “Los Espookys,” “Alternatino with Arturo Castro,” and “My Favorite Shapes.” “Seis Manos” looks like it will continue the trend. Written by Álvaro Rodríguez and Daniel Dominguez, it’s an anime set in the fictional Mexican town of San Simon in the 1970s. The series centers on three orphans who are being trained in martial arts, but after their mentor is killed, they seek out help from an American and a Mexican policía to avenge him.

Momofuku empire founder-turned Netflix food darling David Chang is back to the streaming platform with a new series in which he and a celebrity guest will explore meals in different cities.

“There’s something about traveling with someone that opens you up,” Chang said in an announcement about the show. “Being away from all the craziness of daily life, you spend long days together in an unfamiliar place with nothing to do but wander the street, share meals, and talk.”

He continued: “That’s what BLD is all about—learning more about ourselves, our friends, and the people we encounter out in the world. Plus, of course, the ridiculously delicious meals we share.”

The first season of “The Kominsky Method,” which stars Michael Douglas and Alan Arkin, is surprisingly funny and an easy-to-watch binge for a show that deals pretty heavily with characters coming to grips with their own mortality. As Salon TV Critic Melanie McFarland wrote, “Most of the comedy in 'The Kominsky Method' is mined from watching these two come to terms with their aging and all the bodily slips and slides that come with it. But it’s also a series about grief, about being alone and moving on, and how difficult that can be from a male perspective.”

In this season, Norman (Arkin) reconnects with an old flame (Jane Seymour) after 50 years, while Sandy has to come to grips with the fact that his daughter is dating a man (Paul Reiser) old enough to be — well, her father.

Like the title suggests, “Little Miss Sumo” is a documentary short that packs a lot of power. Over the course of 18 minutes, a crew follows 20-year-old female sumo wrestling prodigy Hiyori Kon. Despite her talent, as a woman, she is banned from much professional competition. The film tracks Hiyori’s life inside and outside the ring — a sacred space that is traditionally reserved only for men.

And here is a full schedule of everything else coming to the platform this month.

October 17
"The Karate Kid"
"THE UNLISTED"