"Whataboutism." Pointless conflict. Despite evidence of improvement, cable news is still falling for the same traps 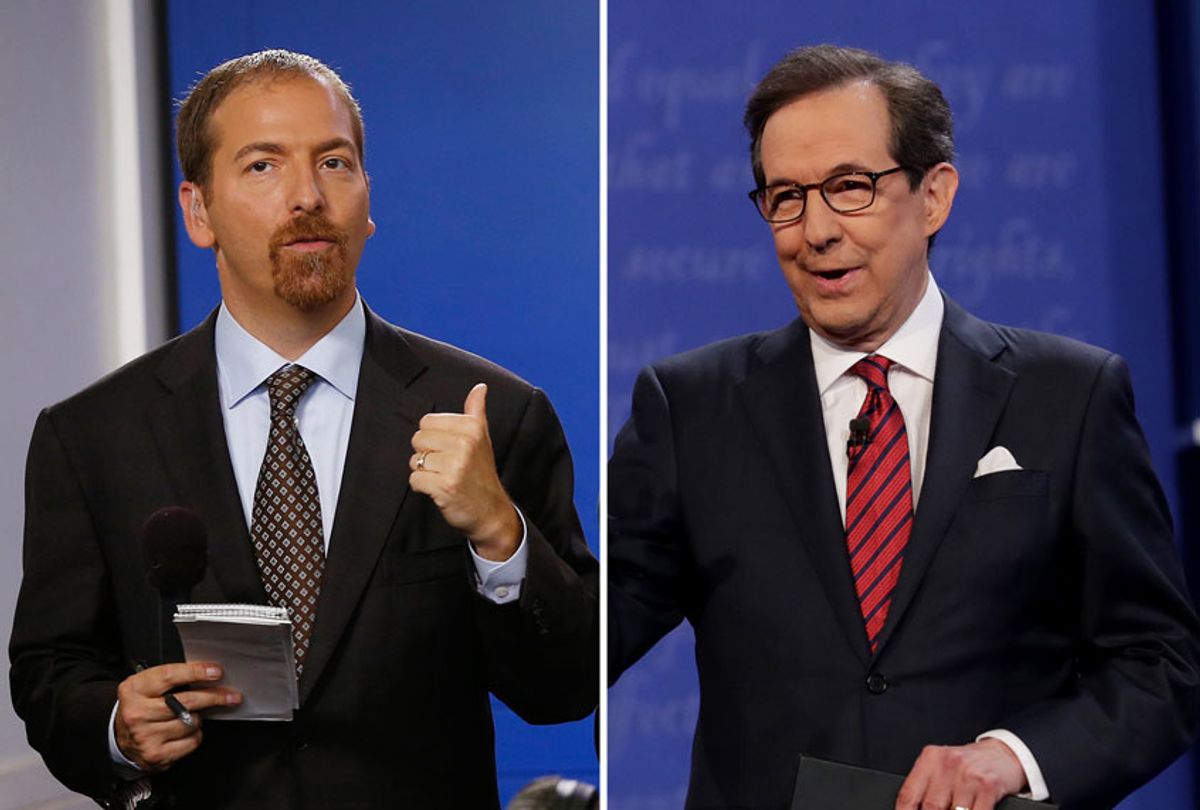 For a good portion of Friday's working hours, Fox News anchor Chris Wallace was trending mightily on Twitter. The reason? To the shock of everyone, and the dismay of many Fox News loyalists, Wallace made a statement about the impeachment inquiry equivalent to saying the sky is blue and the grass is green.

That day, Wallace appeared on Fox News’ “America’s Newsroom” along with its anchor Sandra Smith, who asked him for some thoughts on whether the evolving events of the week changed anything.

“Oh I think it’s changed quite a lot, Sandra,” Wallace replied. “The spinning that's been done by the President’s defenders in the last 24 hours since this very damaging whistleblower complaint came out, the spinning is not surprising, but it is astonishing and I think deeply misleading.”

Anyone familiar with Wallace wouldn't have been blown over by this response. Wallace is part of the Fox News wing that actually practices journalism. He isn’t immune to conservative bias and has carried his share of water for the administration's agenda. But among all of Fox’s on-camera talent, Wallace is more likely than most to actually call out partisan pandering, even when his co-workers are engaging in it.

In the moments that followed, Wallace methodically walked through the points of the whistleblower’s complaint that correctly characterized what was in the White House’s memo version of the phone call transcript.

Smith replied with the administration talking point claiming no evidence of quid pro quo in Donald Trump’s request for a favor in his phone call with Ukraine’s president Volodymyr Zelensky. Wallace firmly interjected with a reply that might as well translate to, “Sandra, please."

“You don’t think dirt on the [former] Vice President and his son’s activities would be of value to a president seeking reelection?” he asked.

Fox News' alleged internal squabble between its hyper right-wing hosts like Laura Ingraham, Tucker Carlson and Sean Hannity and its news anchors, including Wallace and Shepard Smith, has been generating headlines for months. They peak from time to time when the likes of Wallace directly speak out against the claim that Fox News works for Trump’s White House.  (He might not, but many of his co-workers seem to.)

And that’s one reason Wallace trended on Friday's Twitter feeds. Not all of the users invoking his name were complimentary in doing so. In fact, many weren’t.

Another reason, I suspect, is that Wallace’s appraisal is something of an oasis of clarity in a coverage environment clouded by spin, prevarication and "whataboutism." This exchange was the equivalent of Smith doing a spin of the Fox News-designed ballgown in front of Wallace and asking “Well?” and everyone being shocked he had the nerve to answer, honestly, that it’s not a good look.

We’re only a few days into the so-called Impeachment Party that kicked off Tuesday, when Speaker of the House Nancy Pelosi announced that Congress is officially pursuing a formal impeachment inquiry into Trump based on a whistleblower’s complaint.

From the moment Pelosi’s announcement hit the news cycle, ratings surged for CNN, MSNBC, and Fox News, hitting their collective heights when Pelosi made her speech to the nation in mid-afternoon that day.

Like the Clinton impeachment hearings that kicked off in December of 1998, this historic development is destined to be incredibly lucrative for the television news business in general, and begins anew the ratings battle between Fox’s prime time hosts and MSNBC’s “The Rachel Maddow Show.”

Maddow’s ratings plummeted after the results of Special Counsel Robert Mueller’s report failed to move Congress, thereby denying the hopes and dreams she assured her viewers would come true over the course of more than a year.

As of Tuesday, however, Maddow’s back, baby. That day's show attracted some 3.3 million viewers, a significant uptick from its recent nightly average of around 2.5 million viewers. And for the time being, it's reasonable to expect that she’ll maintain or build on that number, just as “Hannity” will likely hold somewhere near present levels — he racked up 3.9 million viewers for Tuesday’s telecast — by going all in on the wild-goose chase of the Ukraine-Biden connection in the hopes of saving Trump and, therefore, the country.

Viewers who turn to Maddow on MSNBC or Hannity, Carlson, or Ingraham on Fox need no convincing as to Trump’s guilt or innocence; they’ve already made up their mind.

Instead, it’s the journalists on the ground and newscast anchors tasked with providing fact-based distillations of unfolding events who the average news consumer will rely upon. And if the reaction to Wallace’s brazen stating of the obvious indicates anything about the media’s collective report card, the student isn’t picking up the lesson as quickly as we’d hoped.

A bit of fairness is called for here. Maddow herself admitted in her first program following Pelosi’s announcement that this is a fast-paced, quickly changing story that forced her to write and tear up many drafts of her show’s script. She’s used to moving at breakneck speed, contextualizing as she goes in her signature fashion.

Most of the reporters in the midst of all this have never directly reported on impeachment proceedings, and many who covered Clinton’s impeachment are serving in elder statesman roles. That era made Chris Matthews’ “Hardball” the go-to show for hating on Bill, but nowadays it’s Chris Hayes who people are talking about.

And those who wanted a firm take on the emerging information about the whistleblower complaint’s substance were served fairly well by Hayes this week, but even better by Nicolle Wallace. In the midst of live coverage of Trump’s news conference at the United Nations on Wednesday, MSNBC's Wallace cut away when Trump began launching into allegations that Joe and Hunter Biden are somehow responsible for “millions of dollars that have been quickly and easily taken out of Ukraine and China…very rapidly while [Joe Biden] was Vice President.”

Immediately after Trump said this, Nicolle Wallace cut into the speech’s audio. “We hate to do this, really, but the President isn’t telling the truth,” she said, going on to explain that those allegations had been investigated by the Ukrainian government, citing a Friday report in the Wall Street Journal that stated Ukraine viewed the issue as having been investigated and settled. “What’s amazing is that what Trump appears to be trying to do is to turn his own impeachment into a big deflection.”

CNN’s Jake Tapper also broke into Trump’s speech with a fact-check, which has become a regular practice for the network whenever Trump holds court in an uncontested forum, which is standard practice at this point for this present. As of Friday, 200 days have passed without the White House holding an on-camera White House press briefing, according to "Reliable Sources" host Brian Stelter.

But these on-air fact-checks aren’t universally ameliorating. Trump manipulates the majority of coverage opportunities to ensure that he doesn’t have to face any pushback from reporters or answer any questions at all.

Take Thursday’s moment,when a gaggle of reporters trailed Trump, who stopped a few feet away from a helicopter, rotors spinning and ready to launch. It was then that he bestowed upon the assembled media that day’s rambling about “witch hunts” and claimed the investigation is “a national disgrace” before touting the strength of the economy and his administration's supposed accomplishments. Then he turned and sauntered away as reporters screamed into the wind kicked up by the presidential flying machine.

Afterward on CNN, anchor Brianna Keilar immediately launched into some fact-checking... but by then, did it matter? The President already commanded the spin – not answering any questions, painting himself as the victim, throwing red meat chunks to his base, all without any pushback from pool reporters in the moment. Media critics have taken TV anchors and reporters to task for doing this since before Trump was elected.

Now, and especially now, producers and news directors really need to evaluate the worth of covering every one of Trump's “blather and run” opportunities.

I’ve said it before: most of the audience understands that a central tenet of solid reporting is to make sure each side is represented in a story, particularly when the story involves a person under investigation. But if that subject has a history of adding nothing relevant to a story and is known to use live news feeds to obfuscate, deflect, and broadcast lies, this adds nothing of value to coverage. Going forward, then, news channels may want to think twice — heck three, even four times — before breaking into a program with in-the-moment coverage of Trump that does not allow reporters to pose follow-up questions.

Equally as useless in this new phase of coverage, and possibly worse because it’s basically standard practice, are the screaming matches between anchors and administration surrogates who can be counted on to defend the President regardless of what he does.

Before Wallace trended, a few folks on Twitter were falling over themselves to commend MSNBC’s Chuck Todd, who performed so poorly in June when he interviewed Trump, for confronting Louisiana Sen. John Kennedy, a Republican, and dramatically refusing to let Kennedy use “whataboutism” or try to gaslight him.

But by the time Todd got to that meme-able moment, Kennedy had already spent most of his airtime “whatabouting” over Biden and supposed corruption in Ukraine. A similar wrestling exhibition occurred when CNN’s Chris Cuomo flexed on President Donald Trump's personal attorney Jay Sekulow. The argument was over whether there was evidence of "quid pro quo" during Trump's call. Cuomo's faithful probably thought he did great.

What did the viewer get out of that confrontation?

What person of sound mind would think they’d get an unbiased, contextualizing response from Donald Trump’s personal lawyer to the question of whether his client might be guilty of a high crime?

If there’s an upside to this, fewer reporters and anchors covered the week's developments from the angle of how impeachment could impact poll numbers and the Democrats’ electability than one might have expected.

The sobering reality, though, is that we’re due to be in this frenzy for a while. This gives reporters time to correct early missteps and refine their angles on one of the highest-profile crime investigations in American history. In the age of the Internet and news presented as sport, that's a gigantic duty.

The spin cycle also corrects, pivots, and employs new ways to catch the media with its zipper down. Even so, one shudders to realize that TV news has had several years to prepare for this party.  But when the doorbell finally rang, it still wasn’t entirely ready.