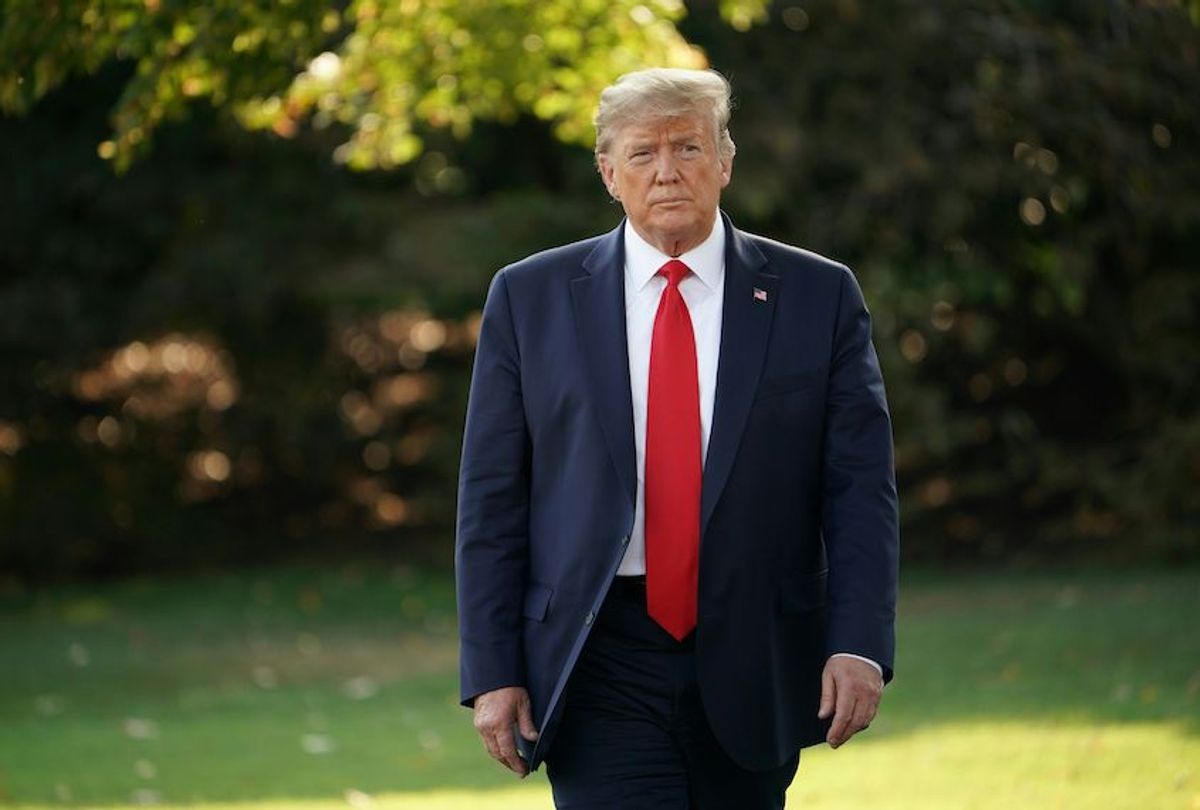 President Donald Trump comes out of the Oval Office for his departure from the White House on September 16, 2019 in Washington, DC. (Mandel Ngan/AFP/Getty Images)
--

In the United States’ intelligence community, Form 401 is used by whistleblowers to report intelligence-related concerns — for example, it was on August 12, 2019 that a whistleblower used Form 401 to complain that President Donald Trump had, on July 25, made a disturbing “promise” to Ukrainian President Volodymyr Zelensky. And that whistleblower complaint has led to Trump facing an impeachment inquiry in the U.S. House of Representatives. But Kevin Poulsen, in a Daily Beast article, reports that Trump supporters have found a new way to attack the whistleblower’s complaint: claiming that Form 401’s requirements have been unfairly changed in a way that hurts the president.

The whistleblower who made the August 12 complaint was not present during Trump’s July 25 phone conversation with Zelensky but knew all about it from other intelligence workers. And the notes/rough transcript of the conversation bear out assertions that Trump tried to pressure Zelensky into digging up dirt on former Vice President Joe Biden and his son, Hunter Biden. But Trump supporters are claiming that the whistleblower’s complaint is invalid because it was based on second-hand information.

“According to the GOP and an army of conservative commentators,” Poulsen reports, “the old version of the form prohibited workers from submitting urgent complaints based on second-hand information — only misconduct witnessed personally could be reported. That changed in early August, the false claim goes, when (Intelligence Community Inspector General) Michael Atkinson snuck through a hasty revision to the complaint form that reversed long-standing policy.”

On Saturday, McCarthy tweeted that in the past, “Whistleblowers were required to provide direct, first-hand knowledge of allegations. But just days before the Ukraine whistleblower came forward, the IC secretly removed that requirement from the complaint form.” And Giuliani echoed that claim on Sunday, tweeting, “Records show that the intelligence community quietly revised the formal whistleblower complaint form in August 2019. Eliminating the requirement to have direct, first-hand knowledge of perceived wrongdoing. Coincidence?”

This “Atkinson smear,” Poulsen notes, is part of a “broad GOP campaign seemingly calculated to discredit the whistleblower report as unreliable, partisan hearsay” even though it has “already been corroborated by an IC IG review and confirmed by the White House’s own transcript of Trump’s call with Ukrainian President Volodymyr Zelensky.”

In reality, Poulsen stresses, Form 401 “has allowed second-hand reports all along,” and the Republican claim that it didn’t exist before August is nonsense. There is, according to Poulsen, “a new version of Form 401 dated August 2019” — but second-hand information was allowed in previous versions of 401.

Irvin McCullough, an investigator for Government Accountability Project and son of a former intelligence official, told the Daily Beast, “There’s never been a requirement that a whistleblower have first-hand knowledge of what they’re reporting. They need to have a reasonable belief. The first-hand information is usually gathered by the inspector general, as I believe did occur here.”