Diplomat Marie Yovanovitch was widely praised by colleagues. Giuliani argued she was "undermining" the Biden probe 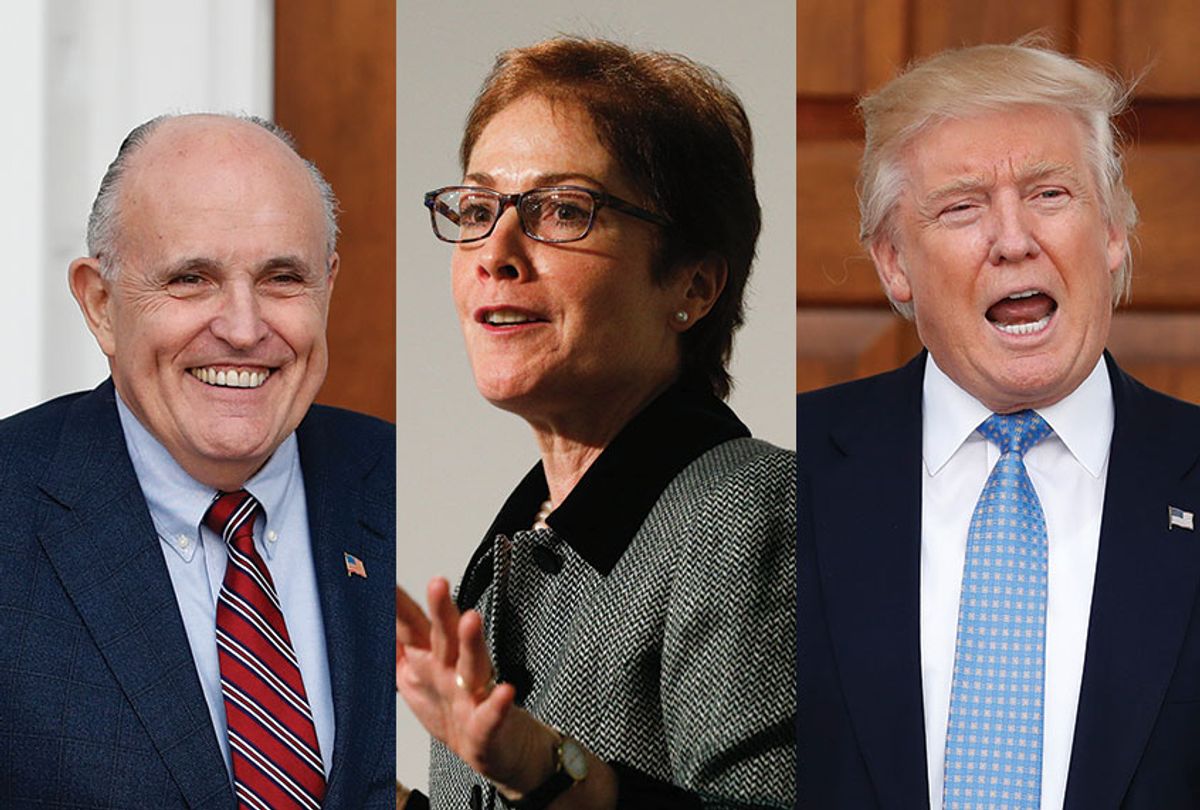 President Donald Trump personally ordered the State Department to recall Marie Yovanovitch, the U.S. ambassador to Ukraine, after  Rudy Giuliani, the president's personal attorney, complained that she was blocking his efforts to pressure Ukraine into investigating Joe Biden, The Wall Street Journal reports.

Trump ordered Yovanovitch removed from her post after “months of complaints” from allies like Giuliani that she was “undermining” his administration and “obstructing efforts to persuade Kyiv to investigate former Vice President Joe Biden,” the Journal reported. State Department officials were told that her removal was a “priority” for Trump.

Yovanovitch was cited by Trump during his controversial July 25 call with Ukrainian President Volodymyr Zelensky, during which Trump pressed the Ukrainian leader to investigate Biden.

"The former ambassador from the United States, the woman, was bad news and the people she was dealing with in the Ukraine were bad news so I just want to let you know that," Trump said, according to a partial transcript released by the White House. "She's going to go through some things," he added.

Trump was asked why he recalled Yovanovitch on Thursday.

"I don't know if I recalled her or somebody recalled her, but I heard very, very bad things about her for a very long period of time — not good,” he said.

Giuliani admitted to the Journal that he told Trump that Yovanovitch “had displayed an anti-Trump bias in private conversations.” The Journal reported that Giuliani believed her to be an “obstacle” in his efforts to push Ukraine to investigate the Bidens.

Giuliani admitted to CNN that he pressed for her firing.

"I felt the president needed to know this to make a personnel decision," he told the network, adding that he also spoke about the issue with Secretary of State Mike Pompeo.

State Department officials tried to fight back against the baseless accusations spread by Giuliani, the Journal reported, but were told they “couldn't shield her from attacks by the president and his allies."

The reports contradict the State Department’s claim at the time of Yovanovitch’s ouster that her departure was long “planned.”

"We saw the knives were out for Masha but it was still shocking that she was forced to depart her post just weeks before she was going to go anyway," retired U.S. ambassador James Melville told CNN last week. "That's just such a sign of disrespect, and almost contempt, for career officers and diplomacy."

Former officials told the network that Yovanovitch was “highly ethical” and a “person of high character,” adding that she was highly focused on tackling corruption in Ukraine.

Many of the baseless allegations Giuliani pushed about Yovanovitch were included in a set of documents that State Department inspector general Steve Linick turned over to Congress on Wednesday. Giuliani admitted to CNN that he provided the department with some of those documents.

"They told me they were going to investigate it," Giuliani told the network.

"(The) assumption that (Yovanovitch) is some kind of 'liberal outpost ... leading a political struggle' really is without merit or validation," wrote Philip Reeker, the acting assistant secretary of state for European and Eurasian affairs.

Other files turned over to Congress show that Trump’s Ukraine diplomats pressed Zelensky to go forward with the Biden probe as a precondition for meeting Trump, even as they described the president’s demand to “withhold security assistance for help with a political campaign” as “crazy.”

Text messages turned over to Congress show that the diplomats went as far as to draft a statement for Zelensky to release vowing to follow through on Trump’s investigation demands.

“We intend to initiate and complete a transparent and unbiased investigation of all available facts and episodes, including those involving Burisma and the 2016 U.S. elections,” the diplomats wrote in the statement intended to be issued by Zelensky, who ultimately never did so.

Though Zelensky has not publicly said he will pursue Trump’s demands, recently-installed Ukrainian General Prosecutor Ruslan Ryaboshapka announced at a press conference Friday that his office will review the closed case into the firm for which Hunter Biden worked, as part of a broader review of cases closed by his predecessors.

“We are now reviewing all the cases that were closed or split into several parts or were investigated before, in order to be able to rule to reverse those cases where illegal procedural steps were taken,” Ryaboshapka said, according to the Associated Press.

Asked if there was any evidence of wrongdoing on Hunter Biden’s part, Ryaboshpka replied, “I have no such information.”