"I think it's crazy to withhold security assistance for help with a political campaign," a top U.S. diplomat said 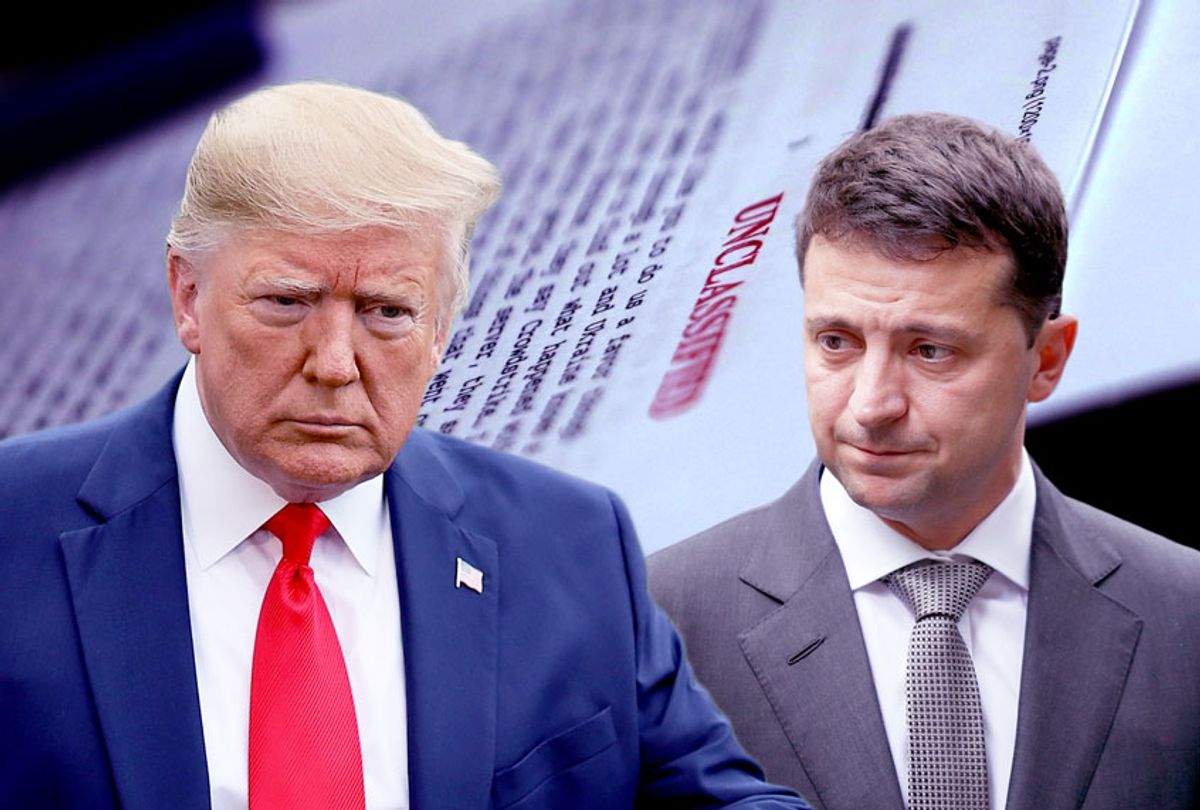 President Donald Trump insisted Friday that his phone call with Ukraine's president at the center of an impeachment inquiry involved "no pressure" or any kind of quid pro quo, less than 12 hours after House Democrats released text messages detailing his administration's alleged efforts to bolster the president's 2020 re-election campaign through diplomatic means.

"The Ukrainian President also strongly stated that NO pressure was put on him," Trump wrote.

Trump insisted he has an "obligation" to root out "corruption," even if it means requesting that foreign nations probe his domestic political rivals. He reiterated that his apparent pressure campaign to have Ukraine investigate the Bidens was about ending corruption — not about procuring dirt on a political opponent.

"As President I have an obligation to end CORRUPTION, even if that means requesting the help of a foreign country or countries. It is done all the time," Trump tweeted. "This has NOTHING to do with politics or a political campaign against the Bidens. This does have to do with their corruption!"

The president did not mention the text messages exchanged between U.S. ambassadors and Ukrainian officials that were released Thursday by House Democrats. But he quoted a Washington Times headline detailing Republican opinions of Thursday's closed-door testimony with former U.S. special envoy for Ukraine, Kurt Volker, who provided the texts to lawmakers as part of their impeachment inquiry into Trump. Volker resigned last week amid fallout over the burgeoning scandal.

The texts, released late Thursday by the House Intelligence, Oversight and Foreign Affairs committees, revealed that Volker and U.S. Ambassador to the European Union Gordon Sondland had indicated to Ukrainian officials that a White House meeting between Trump and Zelensky would be contingent on Ukraine launching investigations into the 2016 election meddling and Burisma, the Ukrainian gas company for which Hunter Biden served on the board.

"Heard from White House — assuming President Z convinces trump he will investigate / 'get to the bottom of what happened' in 2016, we will nail down date for visit to Washington," Volker wrote to Ukrainian official Andriy Yermak on the morning of July 25 just before Trump's call with Zelensky.

In the hours after Trump's call with Zelensky, Yermak wrote to Volker, "Phone call went well. President Trump proposed to choose any convenient dates. President Zelensky chose 20,21,22 September for the White House Visit. Thank you again for your help!"

On Aug. 9, Volker and Sondland discussed arranging a White House meeting and having Yermak draft a statement showing what Ukraine planned to cover, an apparent reference to the investigations requested by Trump.

The next day, Yermak told Volker that he wanted to confirm a date for the White House visit before committing to announcing an investigation into the 2016 election and Burisma. They did not explicitly mention the Biden family.

"Once we have a date, will call for a press briefing, announcing upcoming visit and outlining vision for the reboot of U.S.-Ukraine relationship, including among other things Burisma and election meddling in investigations," Yermak texted Volker, who replied, "Sounds great!"

In a text exchange on Sept. 9, U.S. Ambassador to Ukraine Bill Taylor expressed concerns that military assistance was being withheld from Ukraine in an effort to pressure Zelensky to launch investigations at Trump's request.

Taylor warned Sondland that the move had "shaken [the Ukrainians'] faith in us." He added, "As I said on the phone, I think it's crazy to withhold security assistance for help with a political campaign."

Sondland replied that he believed Taylor was "incorrect about President Trump's intentions," claiming that he felt Trump "has been crystal clear no quid pro quos of any kind." He said Trump was solely "trying to evaluate whether Ukraine is truly going to adopt the transparency and reforms that President Zelensky promised during his campaign. I suggest we stop the back and forth by text."

The text exchanges also include correspondence with Trump's personal attorney Rudy Giuliani, who has come under mounting scrutiny over his own communications with Ukraine.

Republicans dismissed Volker's testimony on Thursday, claiming that it did nothing to support efforts by the Democrats to investigate Trump. Democrats, meanwhile, argued that the text exchanges are further proof of the Trump administration's attempts to pressure Ukraine to meddle in a U.S. presidential election.

Trump's call with Zelensky is the subject of a whistleblower complaint to the intelligence community, publicly released last week by the House Intelligence Committee, which alleged that Trump was "using the power of his office to solicit interference from a foreign country in the 2020 U.S. election."

The whistleblower claimed that White House officials were so concerned about what the president had said during the mid-July call that they intervened to "lock down all records of the phone call, especially the word-for-word transcript of the call."

Trump has admitted that he asked Ukraine to investigate the Bidens, although he has repeatedly insisted he did nothing wrong, declaring there was "no pressure" applied and rejecting claims of a quid pro quo. He has also doubled down on unsubstantiated allegations that Biden's family engaged in corrupt behavior and described his phone call with Zelensky as "perfect."

On Thursday morning, Trump publicly urged both Ukraine and China to investigate the Biden family. The president, whose administration is currently negotiating the resolve of a trade dispute with China, said Thursday that he had not yet asked Chinese President Xi Jinping to investigate the matter but claimed that "what happened in China is just about as bad as what happened with Ukraine."

Hours after Trump's admission, CNN reported that Trump had mentioned Biden, as well as Massachusetts Sen. Elizabeth Warren, another leading Democratic presidential candidate, in a June 18 call with Xi. During that conversation, Trump reportedly told Xi he would remain quiet on the protests in Hong Kong as trade talks progressed.

There has been no evidence of corruption on the part of either Joe or Hunter Biden.

"Engaging in these stunning abuses in broad daylight does not absolve President Trump of his wrongdoings — or his grave offenses against the Constitution," they wrote.

As Democrats press ahead with their impeachment inquiry, Trump and his allies have been working hard to build the president's defense. Jared Kushner, the president's senior adviser and his son-in-law, and White House chief of staff Mick Mulvaney are reportedly the officials most focused on developing the administration's anti-impeachment strategy.