An innocent man on death row makes me a gift: How hope persists despite the odds

The desire to make something beautiful, to express our humanity, doesn't end with a prison sentence 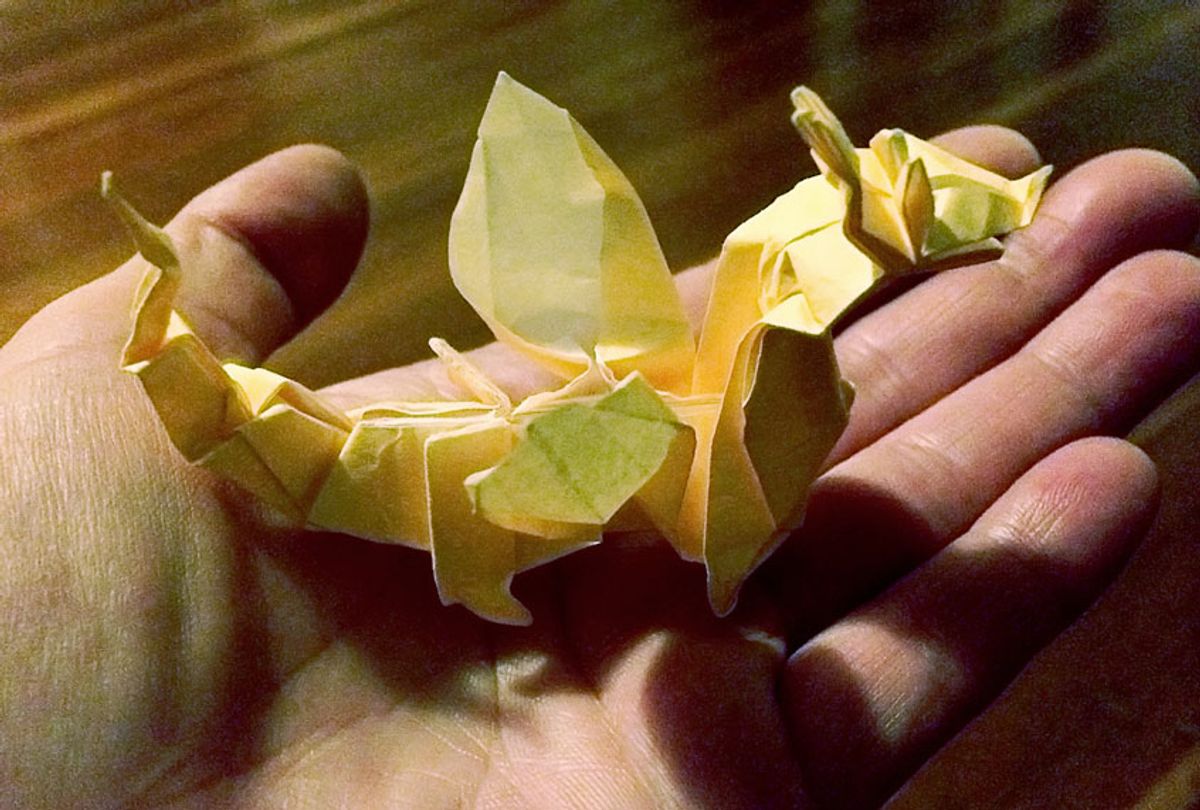 The tiny paper dragon, in the palm of Rene’s hand (photo provided by PR firm)
--

“I’m making you a present,” the man on death row told me.

He was innocent. But our case had now spanned several years, and he would spend at least several more winding his way through appeals before he got off the row, if he ever did. That’s the way the system works.

“What is it?” I smiled at him in the concrete cell of a visiting room. He had previously made me a beautiful gold dragon out of scraps of paper. Men on death row are not allowed scissors, paints, art supplies or much else.

“A necklace,” he answered proudly.

He explained how. He soaked the bones of his chicken meals in his own urine. Once bleached, he carefully ground them down to ivory beads against the metal bars of his cell. Then, using dental floss and bits of thread, he wove the glowing bone beads into necklaces.

In my work with death row clients, I’ve found that hope doesn’t die. We want to believe it does, because we cannot fathom what it is to be locked up — innocent or guilty — for the rest of our life. We cannot confront that we bury people alive. So we pretend they must be dead inside.

But they are not dead inside. This inmate was alive, and had found a way to prove it to himself and the world. He could create tiny golden dragons and bone necklaces. He could live around my neck, see the world through dragon eyes.

I’ve been a licensed investigator for more than 10 years. I’m the person attorneys call to find out if their client did it or not. In addition to death row work, I’ve done refugee asylum cases, overturned false convictions and helped rape trafficking victims escape their captors. I’ve worked cases like the Central Park Five — the conviction of five innocent Black boys portrayed in Ava DuVernay's acclaimed series "When They See Us" — and have watched mothers torn away from their babies because of immigration policies.

There is a direct connection between mass incarceration and the detention camps. We were already on this path of destroying millions of lives. In many states children as young as eight can be tried as adults. Some 60,000 children now live behind bars. Not long ago I visited a man first sent to prison for stealing some lumber as a child. He has lost count of the times he has been raped.

For decades now, we have confused brutality with justice. The harsher we are, we reason, the more moral we become. The more we deny the humanity of others, the more virtuous we think we are. And so, we’ve gone down this terrible rabbit hole of incarceration, constantly exploring the cold depths of our own cruelty.

And it won’t change until we do. As I tell my clients, the path to justice is not overnight. No one is going to show up with a key tomorrow and let them — or us — out of the cage.

We need to dismantle the inhumane laws. Many of us are already doing this on a state level. Here in Oregon, for instance, a coalition that included sheriffs, corrections and advocates supported a new law reversing cruel juvenile sentencing. Such change can take years, but it works, and we need your support.

On a public dialogue level, we need to talk about justice. What is it we want from justice? Can we own our own complicity, can we lay down the defensiveness and ask ourselves — and others — for change? Can we admit hope doesn’t die, and all deserve a chance at a humane life?

My work on that inmate’s case ended not long after that conversation. I still have the dragon he gave me. It sits on my desk. But I never did get that necklace. The last I heard he was still waiting for justice. I can see him in my mind’s eyes, carefully polishing the bones of hope against the bars of his cell.

Rene Denfeld is the internationally bestselling author of three novels. Her latest, "The Butterfly Girl," out now from Harper.