Impeachment in the hall of mirrors: Will this battle save democracy — or end it?

This isn't about Democrats vs. Republicans. It's about whether our democratic institutions have any mojo left 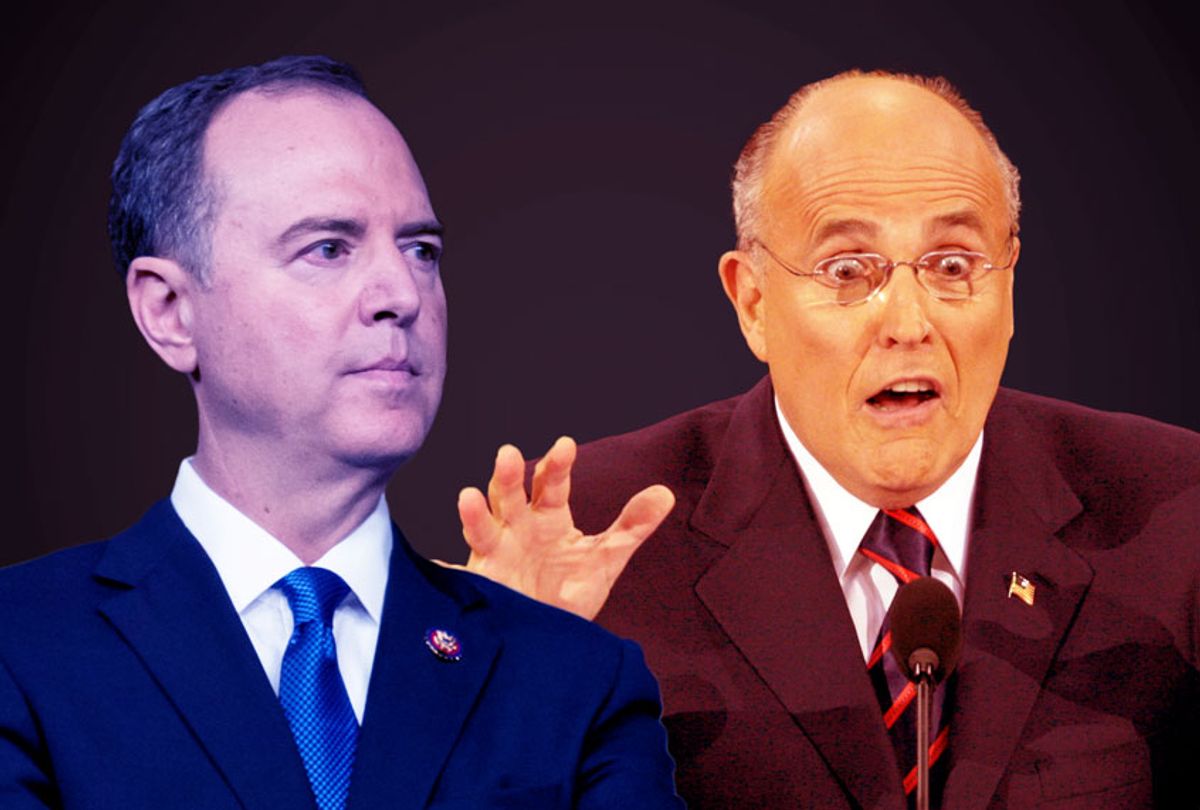 With startling suddenness, the political and moral climate in Washington has shifted over the past few weeks. President Trump now faces the imminent threat of impeachment, apparently over a single blatant act of extortion, even though Democrats had previously decided it wasn’t worth trying to hold him to account for an extensive list of offenses. Why in God’s name is this happening now?

I’m not sure the current conflict over impeachment can usefully be described as Democrats versus Republicans, or as Donald Trump and his supporters against the “resistance.” Those terms are just vague signifiers standing in for other things. The core issue here is much larger than partisan conflict, or the fate of one especially disastrous president. It’s about competing groups who don't even perceive the same reality, and about whether the institutions of democracy — which everyone involved loudly claims to believe in — are strong enough to withstand their most serious challenge in at least 150 years. No one knows the answer, and every aspect of this crisis is overloaded with historical irony.

Both political parties, as I see it, are being swept along by currents they only partly understand. Democrats were exceedingly reluctant to impeach, fearing the unpredictable political consequences, but now feel they have no choice. Republicans, as is increasingly obvious, say different things about Trump in public than in private, but also believe they have no choice but to ride his raft over the waterfall.

Beneath those labels, we have two sharply opposed political and philosophical visions — or perhaps competing fantasies — and the more clearly we can understand the nature and meaning of their collision, the better. On one side we have the institutionalists, who believe that the U.S. Constitution and its considered separation of powers, although embattled, remain strong enough to defeat a would-be strongman’s authoritarian power grab. This describes most Democrats (but not quite all), along with a few “concerned” Republicans and NeverTrumper renegades, nearly everyone in the upper echelons of mainstream media, and a large majority of educated, “elite” Americans in metropolitan areas.

On the other we have the radical reactionaries (and their compliant fellow travelers) who have spent decades eating away from within at those supposedly democratic institutions and the state they support. They now believe they have rotted the timbers and compromised the entire structure; the final collapse is almost here and their victory is all but certain. This comprises various overlapping or competing currents on the far right or mainstream right, many of whom would not state their agenda anywhere near that clearly: The Koch-funded libertarians and tax-cutters and “small government” enthusiasts, the Christian nationalists and white nationalists and anti-immigration hardliners, the Fox News yahoos and “America First” paleoconservatives and “unitary executive” neocons and a hundred different gradations or intermarriages of all the above.

Those forces have operated within the Republican Party for many years, needless to say — taken together, they pretty much are the contemporary Republican Party. Since the Reagan era, Republican elites have operated on the arrogant assumption that they could manage or massage those discordant, corrosive anti-institutional factions into some approximation of a governing coalition. They believed they could use gerrymandering and vote suppression and dog-whistle racism and “originalist” judges and anti-government gaslighting and culture-war propaganda to seize and hold power, while still claiming to support constitutional democracy.

Republicans’ increasingly paradoxical relationship to power made them terrible at government — see also: Bush, George W., administration of — and Donald Trump’s ascendancy made clear that the entire project was incoherent nonsense. It’s less true to say that Trump conquered the Republican Party than to say that the party surrendered without a fight, indeed almost with a sigh of gratitude, and has become fully subservient to his incoherent, whimsical agenda.

Even a few years ago, Bill Barr, Rudy Giuliani and Mike Pompeo would have described themselves as mainstream conservatives, committed to “national security” and the rule of law; now they are agents of anarcho-fascism, chasing moonbat conspiracy theories around the globe and eagerly working to overthrow the “Deep State.”

So here we stand, at an extraordinary historical precipice: Will the institutions of democracy hold, built as they were on the deeply contradictory foundations laid down by a bunch of 18th-century agrarian elitists with big ideas? Or have they been so thoroughly mocked, undermined and termite-munched that they will crumble away before a third-rate Mussolini cosplayer who can’t spell and believes emails can be “acid-washed”? At the moment, there’s no way to know which of those visions is closer to reality, or which will prevail — not just in the impeachment battle but in the longer-term struggle for the future.

Will the federal courts, to cite an obvious, present-tense example, enforce subpoenas issued by Adam Schiff or Elijah Cummings on the Trump White House? And when the latter refuses to comply, as it surely will, how will the Supreme Court — which the radical reactionaries have fought long and hard to capture — decide the matter? Does Chief Justice John Roberts, on balance, agree with Trump’s conclusion that Article II of the Constitution allows him to do whatever he wants? (I am confident that Attorney General Barr can and will phrase that argument more artfully.)

My Salon colleague Amanda Marcotte has tweeted several times that House Democrats should translate their institutional power into forceful action, perhaps by ordering the U.S. Capitol Police to arrest Barr or Pompeo for contempt of Congress. She knows perfectly well that won’t happen; Congress hasn’t tried to exercise its hypothetical police powers over the executive branch since the 1920s. But even the fact that such a scenario is inconceivable is evidence of how far our institutions have decayed since the Watergate era, when Congress and the courts forced a corrupt president to resign rather than face the humiliation of forcible removal. Is that inconceivable too? We don’t know yet, but are likely to find out soon.

As for the historical irony I mentioned earlier, that can be almost perfectly summarized in the upside-down fact that suddenly Democrats have cast themselves as defenders of the FBI, the CIA and other arms of the national security state, while Republicans are the skeptics, interrogators and investigators. For those of us who retain some vague historical awareness of COINTELPRO and the Chile coup of 1973 and the Church Committee report of 1976 — so deep in the forgotten past that its chairman was a Democratic senator from Idaho — this can only seem like a bad plot twist in a dystopian novel.

Just this weekend, we saw Sen. Ron Johnson of Wisconsin, until recently a standard-issue conservative Republican, tell Chuck Todd of “Meet the Press” that he “absolutely” did not trust the FBI or CIA and “didn’t trust them back then” either, apparently meaning before the Trump campaign and the 2016 election. One expected Johnson to say next that of course we had always been at war with Eastasia, and any suggestion to the contrary was ludicrous.

It would be false to claim that both parties are equally to blame for the institutional crisis that now has democracy teetering above the abyss. But each has contributed in its own way. Republicans have waged a ferocious, mendacious and profoundly hypocritical assault on American institutions, while pretending to be more patriotic than everyone else, while Democrats have triangulated and compromised their way into a pattern of partial accommodation and half-hearted resistance.

Democrats embraced the demolition of the welfare state, the deregulation of financial markets and the creation of the prison-industrial complex. They abandoned any pretense of a class-based economic critique, largely supported interventionist foreign policy, and forged alliances with a rising class of wealthy donors on Wall Street and in Silicon Valley.

It’s true that Democrats defended the institutions of democracy in certain areas that affected their core constituencies, especially around civil rights and environmental regulation. But they did little or nothing to resist the vast explosion of economic inequality or the rapid expansion of the post-9/11 security state, twin developments that hardened anti-government cynicism among the bottom 80 or 90 percent of the population, irrespective of supposed ideology or partisan affiliation.

Now Trump’s blatant gangster act with the Ukrainian president has abruptly stirred House Democrats into action after nine months of dithering, and the question I asked at the outset still applies: Why this, and why now? This is where I think both sides inhabit fantasy worlds, and reality lies somewhere in between them. Our democratic institutions are in serious decline, and there will be no redemptive White House perp-walk. But the dime-store fascist coup plotted by Donald Trump and his posse of ludicrous amigos won’t work either. Our crisis is long-term, and no melodramatic climax is in sight.

On one hand, the Ukraine scandal perfectly symbolizes the pattern of corruption and disruption, and the gleeful willingness to ignore both political norms and the rule of law, that have been evident throughout the Trump presidency (and indeed in every phase of Donald Trump’s career). It’s also a convenient fit for the Democratic Party of 2019: Trump’s conduct violated national-security orthodoxy in a way that turned the center-right House freshmen who’ve been dubbed the “CIA Democrats” — with whom Speaker Nancy Pelosi is closely aligned — sharply in favor of impeachment for the first time.

Don’t get me wrong: Impeachment is warranted for a long list of reasons, even if it’s best understood as an episode in the 2020 presidential campaign. But both sides are wandering through a hall of mirrors. Democrats sanctimoniously present themselves as the party of constitutional democracy — in support of the clandestine intelligence agencies and an arcane overseas proxy war no actual citizens understand, let alone voted for. Republicans are breaking new ground, meanwhile, as the only fascist party in history to position themselves as enemies (and victims) of the police state. I don’t know who ends up winning this confrontation, but both sides are playing to lose.