“The man she accused of chasing her was a polio victim," Carlson said. "He couldn't chase anybody" 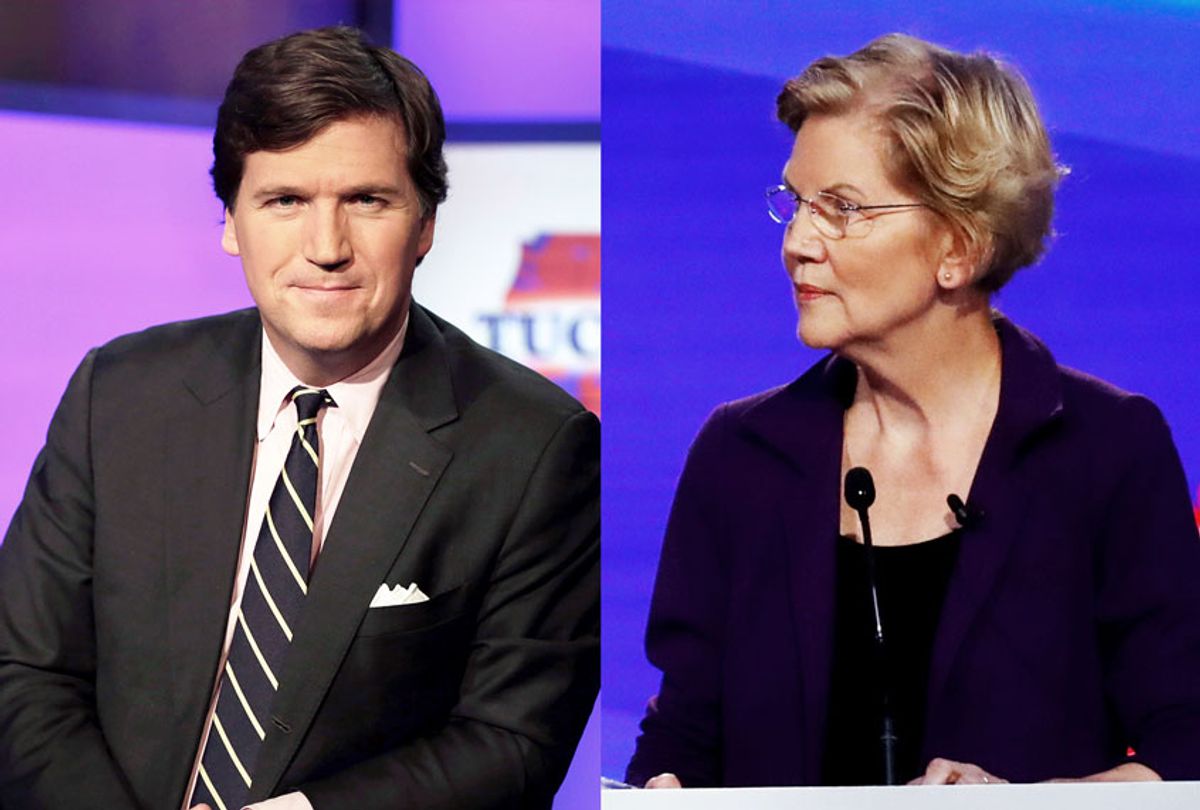 Fox News host Tucker Carlson accused Sen. Elizabeth Warren, D-Mass., of lying about her claim that she sexually harassed by a professor at the University of Houston Law Center.

During a segment on his program Tuesday night, Carlson brought up a story from the Washington Post published earlier that day, which described "how Warren once eulogized a dead colleague by telling his grieving children that the man had sexually harassed her by literally chasing her around in circles in his office.”

“One problem with that story?” Carlson asked his audience. “The man she accused of chasing her was a polio victim. He couldn't chase anybody.”

Carlson's guest, the conservative columnist Howie Carr, accused Warren of changing her story from one in which she characterized Smith as “avuncular” and similar to “Mr. Chips” to one where he became a “Harvey Weinstein predator.” Carr also claimed that Warren did so to curry favor with the #MeToo movement, leading Carlson to assert that Americans reward one another for “victimhood.”

“I kind of think it's our fault, though. It's America's fault,” the Fox News host said.”When you reward people for victimhood, they pretend to be victims. Why wouldn't they?”

The article in question described how Warren had been asked to eulogize Eugene Smith, who had been head of the faculty hiring committee when Warren interviewed in 1978. After being invited to speak at his funeral, “Warren described how Smith had invited her to his office one day just a few months after she had been hired. He shut the door and lunged for her, she said, and as she protested, he chased her around his desk before she was able to escape out the door.”

The report described the reactions of many of the mourners as “slack-jawed,” and mentioned that Smith’s ex-wife and three sons were present. One professor told The Post that some of the attendees questioned whether it would have been possible for Smith to chase Warren around his office, as she claimed, because he was a polio victim. One professor at the university told The Post that Warren had mentioned the incident to him at the time that it happened in 1979, he had advised her not to report anything.

"If she tried to get him, she would be the one in the long term to suffer, because she would become known as a troublemaker," he said.

During his show Tuesday, Carlson also claimed that Warren had been fired from a teaching job for being pregnant “when the evidence shows that’s completely untrue.” In fact, there is no indication that Warren lied about that incident. Critics who alleged that she had not been fired overlooked that women who lose their jobs due to being pregnant are often pressured to leave.

When speaking to Salon earlier this year, Carlson praised Warren for a book she wrote called “The Two-Income Trap.” He told Salon that “if she ran on [the ideas in her book], I would vote for Elizabeth Warren, and I would say so in public. That's what I'm calling for, and I don't care who provides it. Why would I?”