Speaker Nancy Pelosi on impeachment inquiry: "All roads seem to lead to Putin with the president" 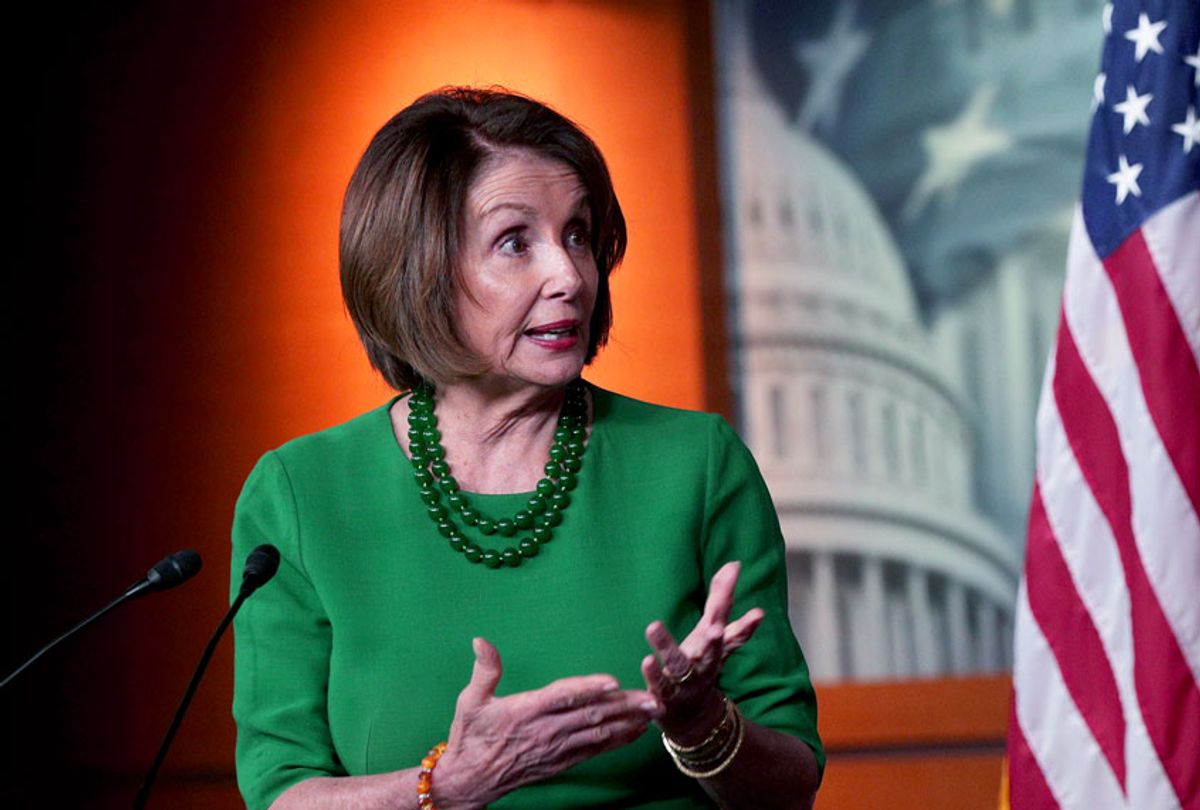 Speaker of the House Rep. Nancy Pelosi (D-CA) speaks at a news conference at the U.S. Capitol October 15, 2019 in Washington, DC. Pelosi said she is holding off on a full House vote to authorize an impeachment inquiry against President Donald Trump. (Alex Wong/Getty Images)
--

"All roads seem to lead to Putin with the president," Pelosi told reporters during her weekly press conference, following a meeting with her caucus.

The speaker said she was not planning to hold a full vote in the House of Representatives to formally authorize the inquiry, which congressional Republicans and the White House have demanded, at this time. (The Trump administration has threatened to not cooperate with the inquiry without a vote.)

"There is no requirement that we have a vote, and so at this time, we will not be having a vote," Pelosi declared. "And I'm very pleased with the thoughtfulness of our caucus with the path that we are on."

"We're not here to call bluffs. We're here to find the truth — to uphold the Constitution of the United States," she added. "This is not a game for us. This is deadly serious, and we're on a path that is getting us to a path to truth and timetable that respects our Constitution."

Pelosi had previously rejected demands for a House vote but signaled she would consider the move earlier this month in an interview with the Atlanta Journal-Constitution.

"If we want to do it, we'll do it. If we don't, we don't. But we're certainly not going to do it because of the president," Pelosi told the newspaper at the time. "It's wrong for a person to ask a foreign government to interfere in our election, and the president is doing it in full view — and in defiance of what our Founders had in mind."

Republican House Whip Steve Scalise of Louisiana claimed in a statement Tuesday that Democrats "are so determined to keep their impeachment process a secret from the American people that they cannot and will not give us a simple yes or no answer as to whether the House has authorized an impeachment inquiry of President Trump."

House Intelligence Committee Chairman Adam Schiff, D-Calif., who has been leading the inquiry, joined Pelosi at her news conference Tuesday and sought to counter Scalise's claim. Schiff asserted that Republicans have been "completely represented" throughout the process and noted that the Constitution is "very clear" that an initial vote is not required.

"They get to ask whatever questions they want in a process in which they have every bit as much opportunity as the majority to ask questions," he said.

Schiff added that congressional investigators have made "dramatic progress in answering some of the questions" central to a whistleblower complaint alleging that Trump abused the power of his office "to solicit interference" from Ukrainian President Volodymyr Zelensky in the 2020 election, while the White House has attempted to cover up those efforts. A rough summary of a phone conversation between Trump and Zelensky released by the White House reveals Trump repeatedly pushed the Ukrainian leader to investigate former Vice President Joe Biden and his son, Hunter Biden. (There is no evidence of wrongdoing by either Joe or Hunter Biden.)

Trump has denied any improper behavior in regards to his communications with Ukraine while insisting that his July 25 call with Zelensky was "perfect," even though he admitted he ordered nearly $400 million in military aid for Ukrainian to be withheld in the days before the call.

The president has also denied that the aid freeze was related to alleged attempts to solicit Zelensky to probe the Biden family. He has claimed that he temporarily blocked the assistance amid concerns that the U.S. was contributing more to Ukraine than other nations.

Pelosi sharply criticized the president during her news conference Tuesday, saying that "asking a foreign government to help a president and his re-election by granting or withholding in the timing of military assistance that had been voted on by the Congress . . . has so many violations in it."

"It undermines our national security," she added. "We were sending that military assistance because of Ukraine needing that vis-à-vis Russia — all roads seem to lead to Putin with the president, though."