We've said this before: But this disastrous week drove some Republicans away from Trump. Beginning of the end? 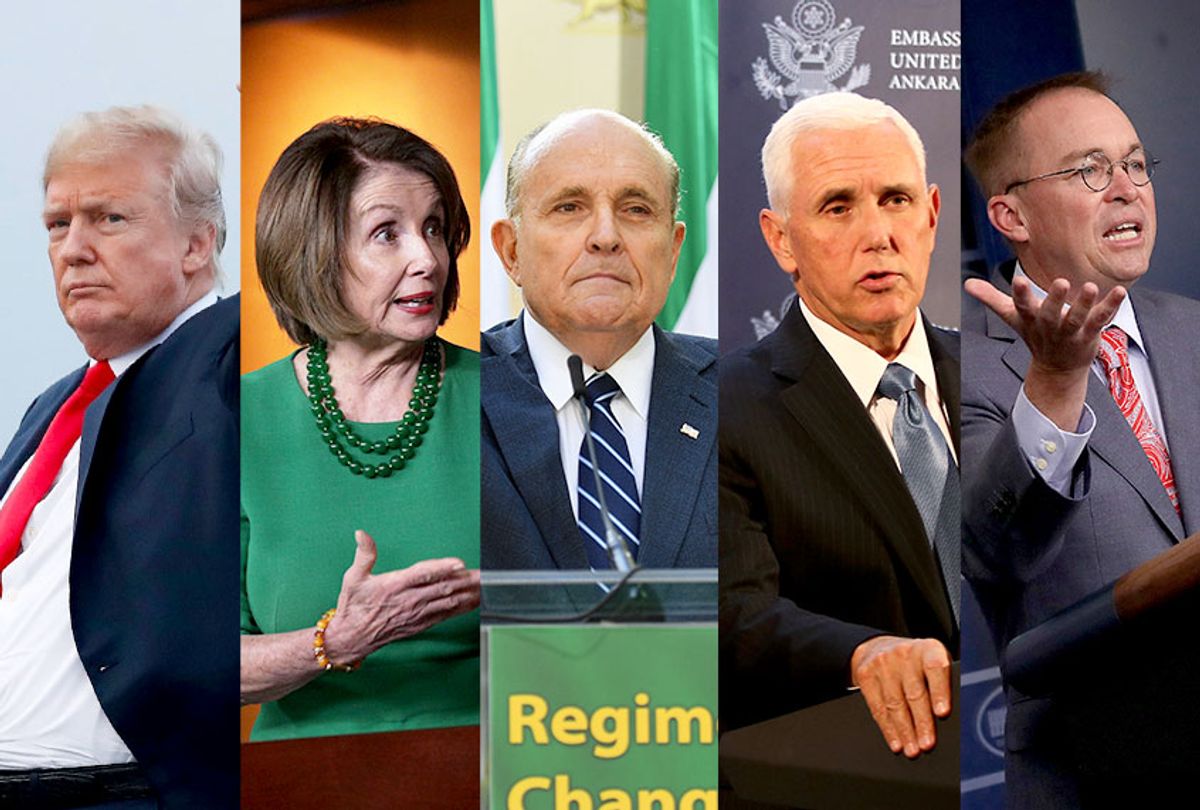 It feels as though every week during the Trump administration is a year and every year a decade. Every day there is a crisis or an outrage or a revelation that takes your breath away. But the underlying dynamics always seem to be the same no matter what. The press reports the story, the Democrats get outraged, the pundits analyze it, the president rages and then Fox and the Republicans all line up like a  bunch of robots and salute smartly. Then we reset until the next crisis, outrage or revelation. It's an exhausting cycle that never seems to get us anywhere and it's bred a fatalistic response in many of us: "Nothing matters."

But this past week is the first time I've thought that we might have seen something truly fundamental shift. A cascade of recent and current National Security Council and State Department officials have defied White House orders and given sworn testimony to congressional investigators that Trump and his personal lawyer, Rudy Giuliani, were running a shadow foreign policy at odds with the stated administration policy and U.S. interests, and aimed at securing personal political benefit for Trump. In other words, the whistleblower was right.

On Thursday, acting chief of staff Mick Mulvaney held a rare press briefing in the White House and admitted that the president had, in fact, demanded a quid pro quo for military aid to Ukraine, astonishing everyone including the White House which quickly had him run back out to declare that he didn't actually say what he had just said. (Hey, that's worked pretty well for Trump so far.)

Mulvaney obviously thought he was being clever by copping to Trump withholding military aid until the Ukrainians agreed to investigate this bogus "DNC 2016 election interference." At least that was looking into the past rather than the future as with the demand for an investigation of Joe and Hunter Biden. Trump's minions all seem to be unable to grasp that asking foreign governments to manufacture dirt on your domestic political opponents in exchange for American aid is grossly unethical no matter how you slice it. Their inane "mirror-Mueller" probe, seeking to exonerate Russia for its activity in 2016 by proving Moscow was framed by the "deep state," the Democratic Party and Hillary Clinton is not only absurd but extremely suspicious.

Let's just say that Mulvaney's explanations didn't help his or the president's cause:

Meanwhile, even congressional Republicans have been agitated by the president's seemingly abrupt decision to green-light a Turkish invasion of northern Syria last Friday night, paving the way for ethnic cleansing of U.S. allies and creating an opportunity for ISIS to regenerate. Sen. Lindsey Graham, R-S.C., normally an enthusiastic Trump bootlicker, was beside himself as the week wore on, even saying that Trump would have blood on his hands and proclaiming it the worst decision of his presidency. Sen. Mitt Romney, R-Utah,  spoke out as well, as did Senate Majority Leader Mitch McConnell.

Others tiptoed around the issue, tepidly voicing concern rather than their usual full-throated endorsement of Donald Trump's genius, obviously waiting to see which way the wind was blowing. Nonetheless, the Senate prepared to pass a sanctions bill against Turkey on a bipartisan basis and the House passed a resolution condemning the abrupt withdrawal of U.S. troops, 354 to 60, with the full support of Democrats and 129 Republicans. That's right, two-thirds of House Republicans joined in on that one.

That is unusual to say the least, particularly since the House is in the midst of a dramatic process that will, in all likelihood,  result in the impeachment of this president. The votes weren't specific to that charge but the fact that they happened at this moment is a sign that Trump's power over House Republicans may be diminishing.

Trump flailed about all week using the same gambit he tried with the notorious Ukraine phone call: "You can believe me or you can believe your lyin' eyes." In this case, he circulated an official White House announcement declaring the troop withdrawal and giving his blessing to the invasion and then, within days, was insisting he never did any such thing.

As the pressure mounted, Trump got more and more frantic, holding rambling, incoherent press avails, finally culminating in a White House meeting with House Speaker Nancy Pelosi and Senate Minority Leader Chuck Schumer, in which he suffered a serious meltdown. He insulted Pelosi to her face, causing Democratic leaders to leave the meeting. The White House circulated a juvenile, threatening letter Trump had sent to Turkish President Recep Tayyip Erdogan three days after his assent to Turkey's invasion plan, obviously trying to backpedal in the face of Republicans opposition. That letter was later reported to have landed in the rubbish bin beneath Erdogan's desk.

It's become clear even to many of Trump's allies on Capitol Hill that this decision was a sign of either dangerous impulsiveness, possible corruption or both. As with the Ukraine mess, Trump carried out this policy in defiance of his national security and foreign policy experts' advice and for inscrutable reasons. His decision-making has always been erratic, but the consequences are becoming deadly.

As part of the pretense that he hadn't given Erdogan the go-ahead, Trump sent Vice President Mike Pence and Secretary of State Mike Pompeo to Turkey to "negotiate." They announced a short "ceasefire" in order to ethnically cleanse a portion of northern Syria, announced they would reverse all U.S. sanctions and called it a breakthrough.

According to the  Washington Post  Turkish officials were happily surprised to learn they would get everything they wanted without having to give anything up at all:

The president was pleased as well:

As if to emphasize once more that he doesn't give a flying Florida flamingo about anything resembling reality anymore, Trump had his henchman Mulvaney announce that after searching high and low for appropriate venues for next year's G7 summit meeting, the administration has determined that the only possible place to have it would be at Trump's Doral golf club in Miami. He's not really even trying to hide his intentions anymore:

All of this adds up to a dawning recognition among Trump's allies that he's adopted some kind of YOLO attitude and is just going to do whatever he wants, damn the consequences. His pronouncements are becoming even more grandiose than before and he apparently thinks he literally has the power to shape reality simply by saying what he wants to be true. Perhaps they're starting to realize, for the first time, just how dangerous that can be.