What the Democrats aren't talking about: Fighting the new Gilded Age with genuine populism

Extreme inequality and the racial wealth gap offer Democrats a huge opportunity. It's not clear they will grasp it 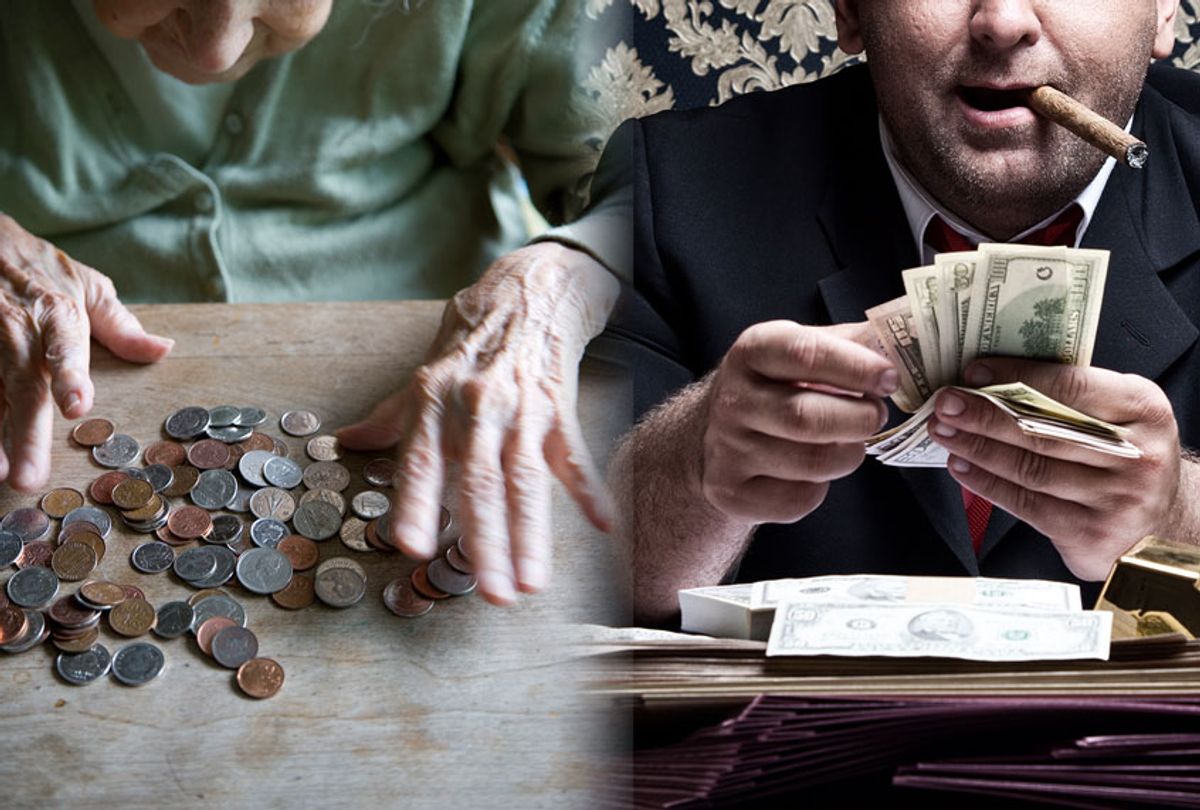 America is in a second Gilded Age. The facts are clear.

This applies to the physical landscape as well. The top 10 percent of American households own approximately 80 percent of the country’s land. Because unions have been systematically destroyed under neoliberalism wages for the average American have been stagnant for at least four decades.

Kleptocrats use “democracy” to legislate themselves (even more) billions and trillions of dollars by siphoning money upward from America’s middle and working classes as well as the poor. One of many examples: Donald Trump and other Republicans make changes to the tax code and other laws to further enrich themselves. This is legal theft and one of the many ways that America’s second Gilded Age is built upon a rotten foundation of moral hazards.

In perhaps one of the most hideous and odious examples of how the very rich have gamed America’s tax code to their benefit, new research from UC Berkeley economists Emmanuel Saez and Gabriel Zucman shows that America’s billionaires pay less in taxes than the bottom 50 percent of income-earners.

Helped along by Republican “tax reform,” many of America’s richest corporations pay no taxes.

Corporations have almost unlimited power both in the United States and the world to control the life chances of billions of people. America’s public resources and other parts of the commons — which nominally belong to all the country’s citizens — are being sold off to the highest corporate bidder.

Extreme wealth and income inequality has shortened life spans and caused an increase in other negative health outcomes for the American people. In the Rust Belt and other parts of the United States, life spans are actually decreasing at levels not seen since the AIDS crisis of the 1980s. Intergenerational class mobility has stagnated.

Automation, the rise of “artificial intelligence” and other new technologies will only accelerate the wealth and income inequality crisis in America as many different types of jobs — skilled, semi-skilled, and unskilled — are replaced. America’s professional class will see their incomes and economic security imperiled and then diminished.

During last Tuesday night's Democratic debate, a dozen presidential candidates engaged in a spirited and intelligent discussion about wealth and income inequality in America and potential solutions, including a guaranteed minimum income, changes to the country’s broken health care system, strengthening unions and raising the minimum wage.

Despite their differences on how best to solve America’s wealth and income crisis, as well as other questions of public policy, almost all of the prospective Democratic presidential nominees showed themselves to be better stewards of American democracy than Donald Trump and the Republican Party.

Second, in making that connection the Democratic candidates could have then explained how racism is a national security threat for all Americans, because the extreme racial wealth and income gap poses a threat to the country’s economy and democracy.

The McKinsey & Company’s new report, "The Economic Impact of Closing the Racial Wealth Gap," details this threat: The wealth gap between white and black families could potentially cost the United States economy up to $1.5 trillion by 2028:

Other than its obvious negative impact on human development for black individuals and communities, the racial wealth gap also constrains the US economy as a whole. It is estimated that its dampening effect on consumption and investment will cost the US economy between $1 trillion and $1.5 trillion between 2019 and 2028 — 4 to 6 percent of the projected GDP in 2028.

The McKinsey report offers this data about the scale of the black-white wealth gap:

Beyond the overall growth in top-line numbers, however, the growth in household wealth ... has not been inclusive. In wealth, black individuals, families, and communities tend to lag behind their white counterparts. Indeed, the median white family had more than ten times the wealth of the median black family in 2016.

In fact, the racial wealth gap between black and white families grew from about $100,000 in 1992 to $154,000 in 2016, in part because white families gained significantly more wealth (with the median increasing by $54,000), while median wealth for black families did not grow at all in real terms over that period. ... Such a gap contributes to intergenerational economic precariousness: almost 70 percent of middle-class black children are likely to fall out of the middle class as adults.

This report is another in a series of findings warning that black Americans may actually have zero or negative net wealth by the year 2053. As the United States becomes a "majority-minority" country, such economic disparities will have an outsized negative impact on all of American society.

How should the Democrats best communicate that America’s racial wealth and income gap is a threat to the country’s economy — as well as democracy and overall stability — in a way likely to mobilize their base while also winning over independents, undecideds and other voters?

The Democrats’ talking points and overall narrative should tell a story that extreme wealth and income inequality is a betrayal of America’s ideal norms of hard work, opportunity and the value of family. Such extremes of wealth and income inequality across the color line are also a betrayal of American patriotism because of what it suggests about the “American dream.”

As new research from sociologists Matthew Feinberg and Robb Willer demonstrates, Democrats can expand support for progressive forward-thinking public policy among moderates, and even some conservatives, by framing their appeals in ways that appeal to “traditional” American values.

Democrats should also take some lessons from UC Berkeley scholar Ian Haney López, author of the new book “Merge Left: Fusing Race and Class, Winning Elections, and Saving America.” As Salon's Paul Rosenberg recently explored in a two-part interview with López, his research on a winning race-class strategy for the Democrats suggests a solution:

A message urging joining together across racial groups to demand that government promote racial and economic justice consistently proved more convincing — to whites as well as to people of color — than the Right’s racial fear story. The race-class message also proved stronger than the main progressive alternatives, either staying silent about race to focus on class, or leading with racial justice. Bottom line: the race-class research suggests that merging race and class builds energy and excitement between core constituencies indispensable to a resurgent Left but typically seen as mutually hostile — the white working class and Barack Obama’s coalition of nonwhite voters.

Tuesday’s debate lacked any substantive discussion of racism, racial inequality or the Republican assault on the civil and human rights of nonwhite people. Instead of running away from those fundamental questions of American democracy out of a fear of alienating “working class” white defectors — an avoidance that only demobilizes Democrats by ignoring the concerns of their most enthusiastic voters — the Democrats should fuse questions of class and race together in a compelling story about how the nation is much stronger when all Americans do better economically.

America’s second Gilded Age is a betrayal of Americans on both sides of the color line. That is a winning message in 2020 and beyond.

The question becomes, will the Democrats speak that truth and ride a wave of genuine American populism to victory? Or will the Democrats instead choose a losing strategy of uninspired, tedious neoliberalism-lite that risks giving the Donald Trump's authoritarian regime a second term, or perhaps an indefinite hold on political power?