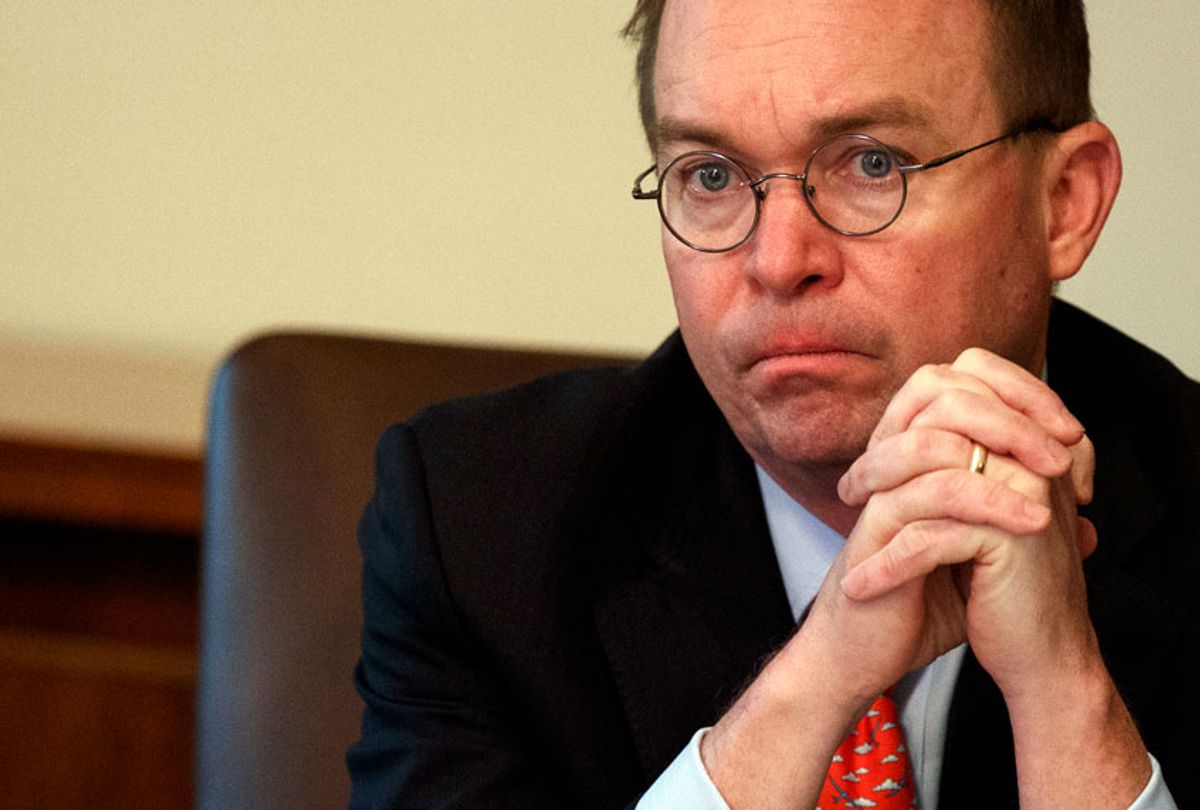 During an appearance on "Fox News Sunday," President Donald Trump's acting chief of staff Mick Mulvaney admitted that the commander-in-chief "still considers himself to be in the hospitality business" despite ostensibly serving the public in a disinterested fashion.

"Honestly I think what you saw in the tweet was real," Mulvaney told anchor Chris Wallace on Sunday. "The president isn't one for holding back his feelings and his emotions about something. He was honestly surprised at the level of pushback. At the end of the day, he still considers himself to be in the hospitality business."

Wallace followed up Mulvaney's comment by saying, "You say he considers himself in the hospitality business. He's the president of United States!"

"But that's his background," Mulvaney replied. I used to be in the real estate business." He later added that Trump "wanted to put on a show. He wanted to take care of folks."

Trump aroused controversy when he announced that he was hosting the G7 summit at the Trump National Doral in Miami, with many citing it as a conflict of interest because he would personally profit off of a government event. The president eventually reversed his decision, tweeting on Saturday that "I announced that I would be willing to do it at NO PROFIT or, if legally permissible, at ZERO COST to the USA" but claiming that because of media and Democratic Party opposition "we will no longer consider Trump National Doral, Miami, as the Host Site for the G-7 in 2020. We will begin the search for another site, including the possibility of Camp David, immediately."

Mulvaney also discussed his controversial Thursday press conference, one in which he admitted that Trump has withheld $391 million in military aid to Ukraine until the country provided him with dirt that he could use to smear 2016 Democratic presidential nominee Hillary Clinton and 2020 Democratic presidential candidate Joe Biden.

Mulvaney told Wallace that "I didn't say that" when asked about his remarks on Thursday. The acting chief of staff insisted that although Trump had mentioned the Democratic National Committee's server possibly being in Ukraine (an unfounded conspiracy theory), "it wasn’t connected to the aid."

“Did he also mention to me in passing the corruption related to the DNC server? Absolutely. No question about that,” Mulvaney said. “But that’s it, and that’s why we held up the money.”

During the press conference Mulvaney referred to Trump’s debunked conspiracy theory that the Democratic National Committee's computer server, supposedly containing Hillary Clinton’s missing emails, was actually in the possession of a Ukrainian company. After saying "that’s it, and that’s why we held up the money," he responded to a question pointing out that this was a quid pro quo by telling reporters, "We do that all the time. You’re saying the president of the U.S. can’t ask someone to help with an ongoing public investigation?"

He added, "I have news for everybody: Get over it. There’s going to be political influence in foreign policy."

On the following day, the Trump campaign began selling T-shirts with the slogan "Get over it," seemingly pivoting their messaging on the Ukraine scandal from denying that there was a quid pro quo to embracing it and characterizing its critics as whiny. In addition to pursuing a debunked rumor about the DNC computer server, Trump also wanted Ukrainian President Volodomyr Zelensky to investigate Biden's son Hunter over rumors that the former vice president had gotten a prosecutor fired to protect his son from a corruption investigation. This, too, is a baseless rumor that has been repeatedly debunked.