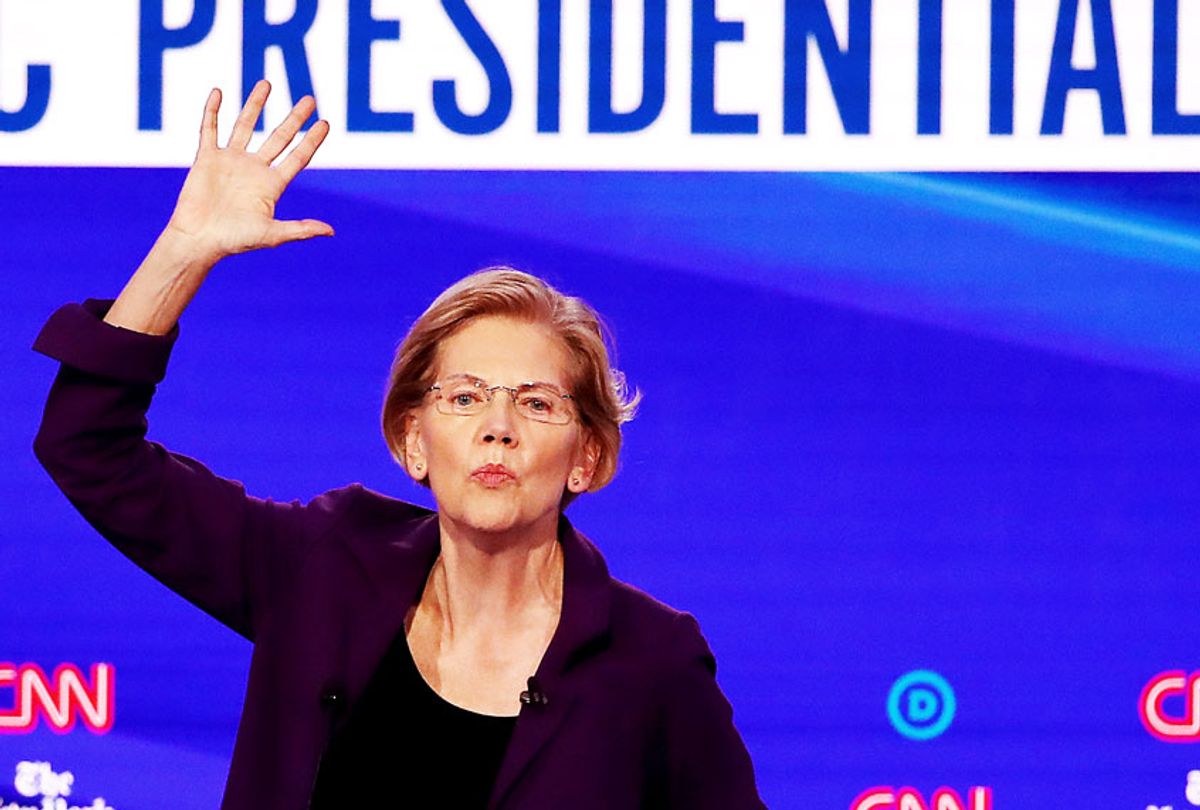 Elizabeth Warren (D-MA) speaks during the Democratic Presidential Debate at Otterbein University on October 15, 2019 in Westerville, Ohio. A record 12 presidential hopefuls are participating in the debate hosted by CNN and The New York Times. (Win McNamee/Getty Images)
--

Democratic presidential candidate Elizabeth Warren revealed Sunday that she will soon release a plan that details how she intends to finance "Medicare for All" after facing intense criticism from some of her 2020 rivals over her refusal to explain how she would fund her proposed health care plan.

"I didn't get a question today about Medicare for All, but I want to say a word about it before we go any further," the Massachusetts senator told supporters during a campaign stop in Indianapolis, Iowa. "And that is this: Every single person who is running for president of the United States on the Democratic side right now knows that families are getting crushed by the cost of health care."

"What I see, though, is that we need to talk about the cost," Warren continued. "And I plan over the next few weeks to put out a plan that talks about, specifically, the cost of Medicare for All and, specifically, how we pay for it."

Warren supports 2020 competitor Vermont Sen. Bernie Sanders' Medicare for All plan. She said Sunday that every Democratic presidential hopeful knows that the "cheapest possible way to make sure that everyone gets the health care that they need is Medicare for All, and that's why I support Medicare for All."

"You know right now the cost estimates for Medicare for All vary by trillions and trillions of dollars. And the different revenue streams for how to fund it — there are a lot of them," she said. "So this is something I've been working on for months and months, and it's got just a little more work until it's finished."

As she has climbed in the polls over the past few months and has reached a neck-and-neck point with former Vice President Joe Biden, the rest of the primary field has escalated its attacks on her, casting her as evasive on health care.

Her announcement comes on the heels of the fourth Democratic primary debate, where her 2020 rivals attacked her on stage over her refusal to say whether her single-payer, government-sponsored plan would raise taxes on the middle-class or what it would look like for the 160 million Americans who currently get coverage from their employer.

In Iowa on Sunday, Warren noted her campaign had been weighing "what's possible" and "how you pay for it" for months. During that time, she has dodged questions on whether middle-class taxes will go up, claiming that costs will only increase for the wealthy and big corporations. Sanders, for his part, has acknowledged that expenses would also increase for the middle-class.

"I think there are — have been — many estimates about what the cost would be and many different payment streams. And I've been working on how to get the exact details to make that work," Warren said Sunday. "I've been a co-sponsor of Medicare for All from the beginning. You know, one of the things that happens when you do lots of selfie lines is you get to hear from a lot of different people — and what they talk about is the cost of health care is crushing their families."

In the recent primary debate, Sanders, the fellow progressive candidate who Warren has most-closely aligned with on health care and who wrote the Senate bill outlining Medicare for All, said it was "appropriate to acknowledge that taxes will go up." He has argued that while middle-class taxes would go up, premiums, deductibles and co-payments would be eliminated, reducing total costs.

"At least Bernie's being honest here and saying how he's going to pay for this and that taxes are going to go up," shot back Sen. Amy Klobuchar, D-Minn.,  who supports improving coverage by expanding Obamacare. "And I'm sorry, Elizabeth, but you have not said that. And I think we owe it to the American people to tell them where we're going to send the invoice."

"It's mystifying that for someone who has put having a plan for everything at the center of her pitch to voters, Senator Warren has decided to release a health care plan only after enduring immense public pressure for refusing to do so," Ducklo said.