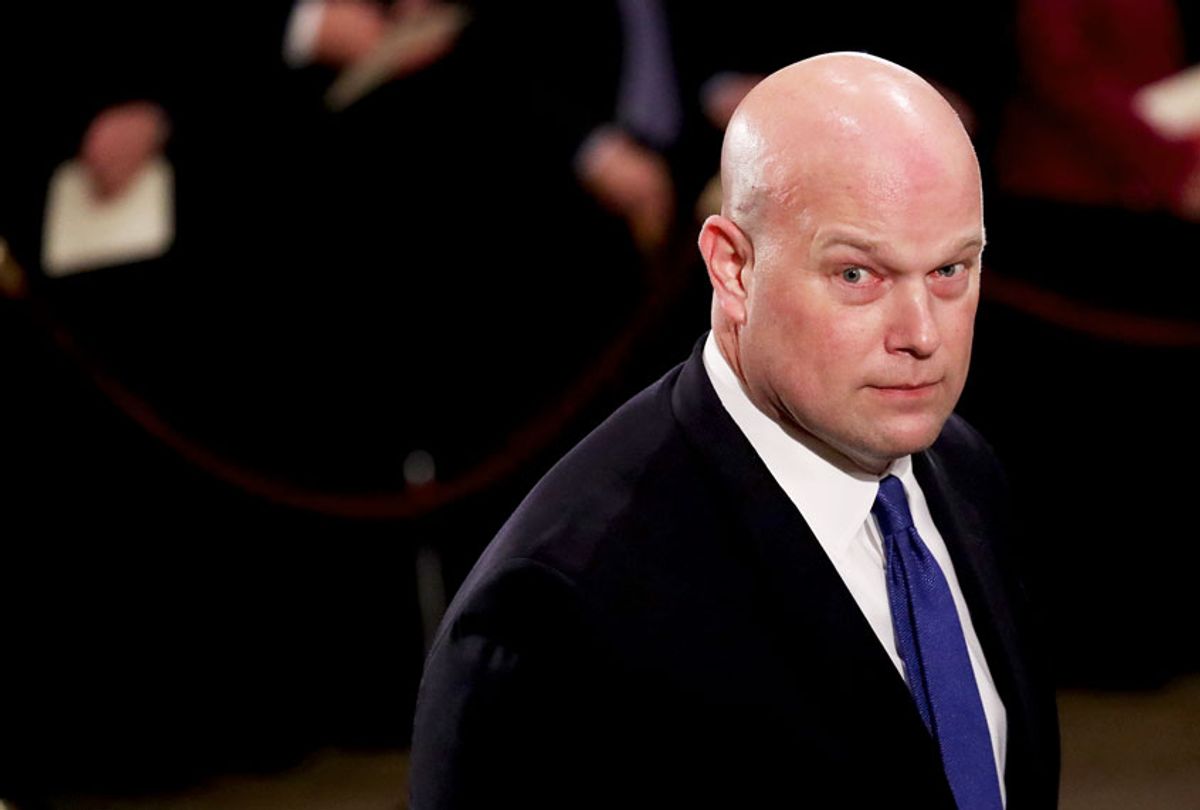 Acting U.S. Attorney General Matthew Whittaker arrives inside the U.S. Capitol Rotunda for a ceremony honoring late former U.S. President George H. W. Bush at the U.S Capitol Rotunda on December 03, 2018 in Washington, DC. A WWII combat veteran, Bush served as a member of Congress from Texas, ambassador to the United Nations, director of the CIA, vice president and 41st president of the United States. A state funeral for Bush will be held in Washington over the next three days, beginning with him lying in state in the U.S. Capitol Rotunda until Wednesday morning. (Photo by (Jonathan Ernst - Pool/Getty Images)
--

Invoking the Constitution, former acting Attorney General Matthew Whitaker claimed that “abuse of power is not a crime” as he rushed to President Donald Trump's defense after the nation's top envoy to Ukraine testified to Congress that Trump had withheld military aid in order to pressure Ukraine to investigating his political opponents.

“I’m a former prosecutor and what I know is this is a perfect time for preliminary hearings where you would say show us your evidence,” he told Ingraham. “What evidence of a crime do you have? So the Constitution — abuse of power is not a crime.

Acting Ambassador Bill Taylor testified Tuesday to Congress that military aid to Ukraine was contingent on a public announcement of a Ukrainian investigation into the Bidens and the 2016 election. Rep. Debbie Wasserman Schultz told NBC News after the testimony that the only conclusion from Taylor’s revelations is that “the president abused his power.”

“Let’s fundamentally boil it down,” he said on the right-leaning network. “The Constitution is very clear that there has to be some pretty egregious behavior, and they cannot tell the American people what this case is even about.”

However, as The New York Times pointed out in their explainer of the impeachment process, the Constitution allows Congress to remove presidents who commit “treason, bribery or other high crimes and misdemeanors.” The term “high crimes and misdemeanors” refers specifically to “an abuse of power by a high-level public official” and “does not necessarily have to be a violation of an ordinary criminal statute.”

The issue has already come up in Democratic deliberations on how to proceed with their impeachment inquiry. A source familiar with the party’s strategy told NBC News that Speaker of the House Nancy Pelosi, D-Calif., has pushed for an article of impeachment for “abuse of power,” because it is the umbrella under which “this all fits to connect it and help the public understand.”

“What made it abusive is it was done in a way that betrayed the country and our national security interests and helped his own interests politically,” added another source involved in the discussions.

Pelosi is also considering a separate article of impeachment for obstruction or contempt of Congress in response to the administration’s refusal to cooperate with the probe and Congress’ subpoenas.

House leaders are cautious, because the release of the Mueller report showed that the Russian effort in the 2016 election was “exceptionally compelling but too hard to digest,” former DOJ official Chuck Rosenberg told NBC News. “The abuse of power narrative is much simpler.”

Neal Katyal, a former acting solicitor general, told the network that an article of impeachment for “abuse of power” in relation to Ukraine was “exactly correct.”

“The phrase captures the central evils of what Trump did in Ukraine," he said, "and keeps the story focused there — and not on distracting sideshows.”