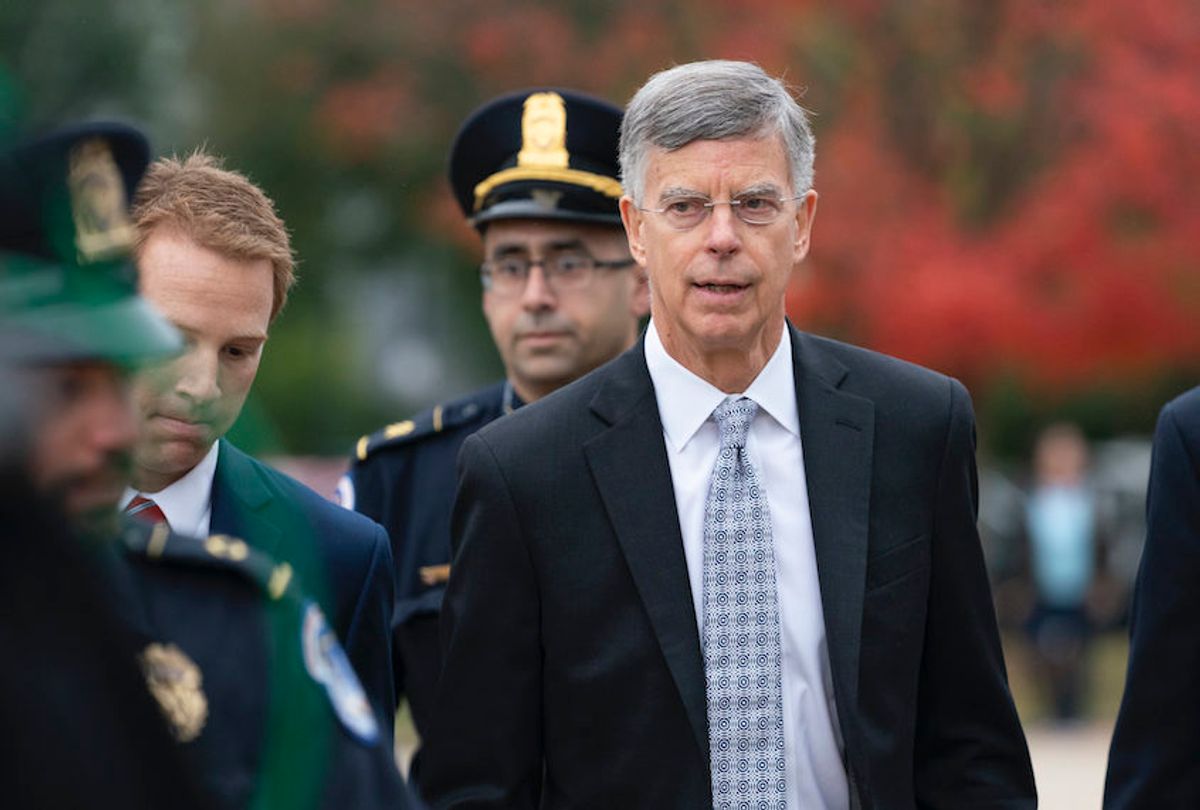 The top U.S. diplomat in Ukraine, William Taylor, is escorted by U.S. Capitol Police as he arrives to testify before House committees as part of the Democrats' impeachment investigation of President Donald Trump. (AP Photo/J. Scott Applewhite)
--

Bill Taylor, a veteran U.S. diplomat now serving as acting ambassador to Ukraine, told a congressional panel during a private session that aid was made contingent on a public announcement that the Ukrainian government would investigate the Bidens and the 2016 election.

Taylor told Congress that he was told by Gordon Sondland, the U.S. ambassador to the European Union, that Trump wanted Ukrainian President Volodymyr Zelensky to investigate what he believed was Ukrainian interference in the 2016 election and also to investigate Burisma, the Ukrainian energy company where Hunter Biden was a board member, according to The Washington Post.

“Amb. Sondland also told me that he now recognized that he had made a mistake by earlier telling the Ukrainian officials to whom he spoke that a White House meeting with President Zelensky was dependent on a public announcement of investigations — in fact, Amb. Sondland said, ‘everything’ was dependent on such an announcement, including security assistance,” Taylor told House investigators. “He said that President Trump wanted President Zelensky ‘in a public box’ by making a public statement about ordering such investigations.”

Taylor told Sondland, “it’s crazy to withhold security assistance for help with a political campaign,” in text messages obtained by Congress earlier in the investigation. He called Trump’s plot a “nightmare scenario” in another message.

Taylor provided House investigators an “excruciatingly detailed” account of what happened behind the scenes during the Ukrainian pressure effort, The New York Times reported, citing Taylor’s “habit of keeping notes throughout his tenure.”

Democrats who were in the room for Taylor’s testimony said his account was a game-changer in the impeachment inquiry.

“It was just the most damning testimony I’ve heard,” Rep. Debbie Wasserman Schultz, D-Fla., told the Post. “He drew a very specific direct line from President Trump to the withholding of foreign aid and the refusal of a meeting” with Zelensky, she said, “directly related to both insisting on Zelensky publicly say[ing] that ... they will investigate.”

Rep. Stephen Lynch, D-Mass., told NBC News that Taylor’s was “without question the most powerful testimony” thus far in the impeachment investigation. Other Democrats in the room described the testimony to the network as “disturbing,” “very troubling” and “explosive.”

Republicans attempted to downplay the testimony.

But CBS News reports that there were “sighs and gasps” in the room during Taylor’s opening statement, including from Republicans.

"We're trying to see if any witness has a connection between foreign aid and pausing the foreign aid," Meadows said. "As it relates to the quid pro quo, we haven't had any witness suggest that."

Sondland testified to Congress last week that Trump directed him to work with the president's personal attorney, Rudy Giuliani, who Sondland said wanted to “prompt the Ukrainians to investigate Vice President Biden or his son or to involve Ukrainians, directly or indirectly, in the president’s 2020 re-election campaign.”

Former Ukraine ambassador Marie Yovanovitch testified that Trump personally pressured the State Department to remove her after Giuliani spread “unfounded and false claims” about her. Yovanovitch’s ouster was also sought by Lev Parnas and Igor Fruman, Giuliani’s henchmen in the Ukrainian pressure effort, who have since been arrested on federal charges.

Though previous witnesses have made headlines with their testimony in recent weeks, Democrats said Taylor’s was the most damaging.

"All I have to say is that in my 10 short months in Congress,”  freshman Rep. Andy Levin, D-Mich., told CNN, “it's my most disturbing day in Congress so far.”