There's only one political view at "The View": Joe Biden is terrific

There's a lot of politics on the most influential morning show, but no dispute about the Democratic frontrunner 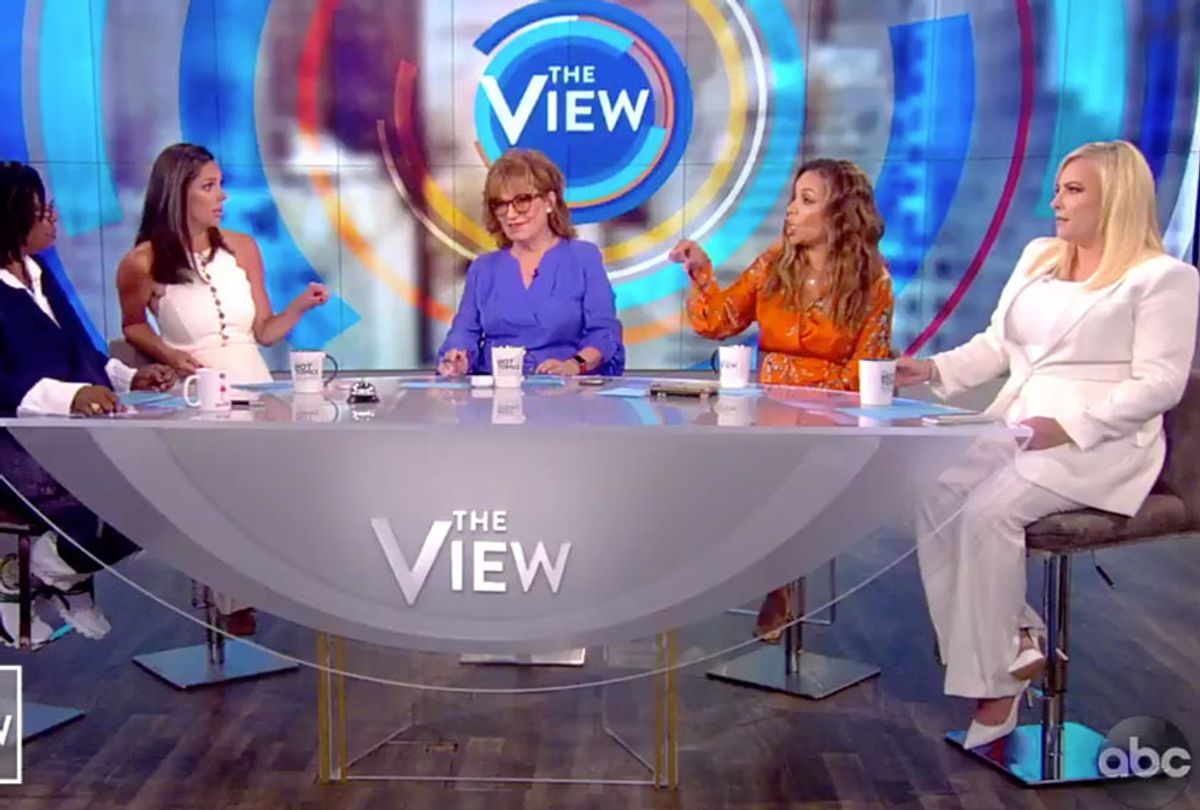 When the Democratic frontrunner stopped by the table of "The View" on April 26 for his first interview since announcing his presidential run, he was afforded an honorific rarely applied to U.S. vice presidents: “The legendary Joe Biden!”

It was a warm homecoming. They called him Joe; he called them friends. Meghan McCain asked him, “What took so long to get into the race? We’re so happy you finally announced.”

When the subject turned to Biden’s handling of the 1991 Anita Hill/Clarence Thomas hearings, Joy Behar joked, “Welcome to the 'View' apology tour.” She all but fed Biden lines on how to handle apologizing to Hill (“You know, I think what she wants you to say is…”), but Biden wouldn’t bite. 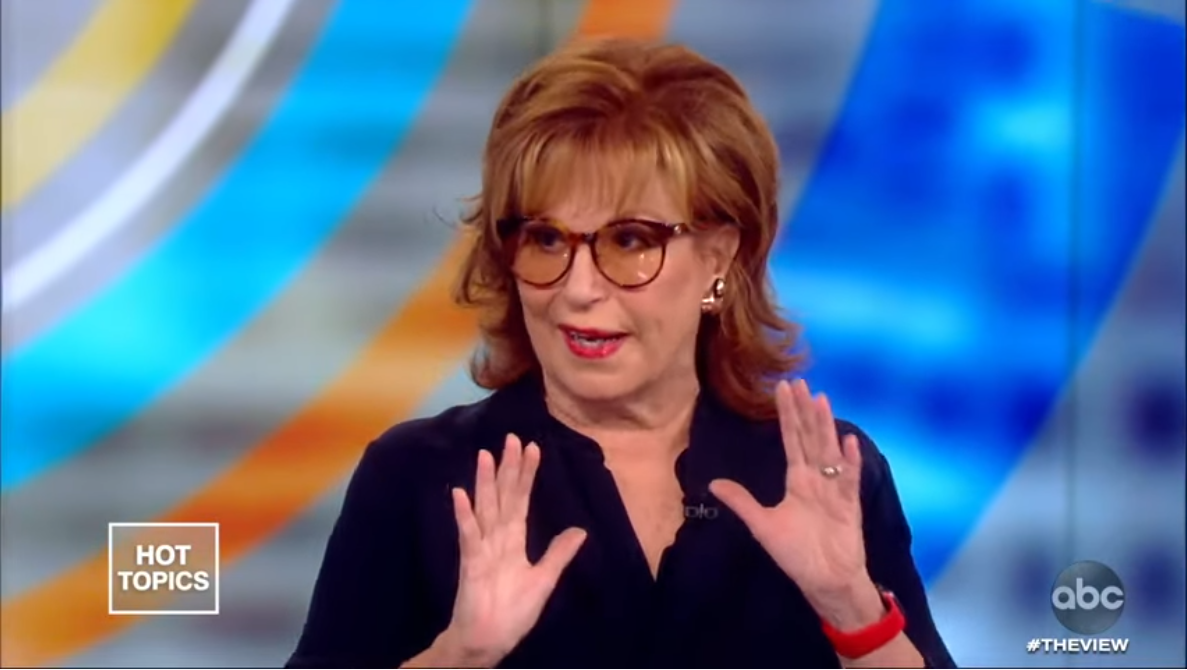 Still, "The View" has served as a sort of daytime rapid response room for Biden’s candidacy: defending him against charges of being too old (Ana Navarro: Biden “is running against Donald Trump, guys. He’s not running against Usain Bolt” — 3/22/19), inoculating him against charges based on his decades-long career (Abby Huntsman: “We all know any dirty laundry he might have” — 1/30/19), normalizing his invasive interactions with women (Behar: “He’s touchy-feely and he didn’t mean it” — 9/4/19) or dismissing his mangling of a war story (McCain: “He’s probably just exhausted, too” — 9/4/19).

The panel seemed particularly intent on squelching memories of the Hill hearing: Sunny Hostin (4/29/19) declared Biden’s apology “should be the end of it,” while Huntsman insisted, “If folks on the left are going to rake him over the coals for something that happened so long ago … then you deserve Trump.” McCain (3/27/19) seemed to offer her youth as a defense of Biden: “This was 27 years ago. I was in elementary school. I have no memory of this.”

The "View" hosts are quick to boost a Biden union endorsement (4/30/19) or offer general words of support (Huntsman: “I love Joe Biden. I want him to do well” — 9/5/19). But it’s their standing up against the many questions that could be raised about Biden’s candidacy that distinguishes the panel.

This tendency has not gone unnoticed at the table. During a discussion of Kamala Harris laughing at a voter using a slur against the developmentally disabled about Donald Trump, Hostin (9/9/19) said, “The men get passes every single time. Every single time. Especially Joe Biden. We’ve given him a pass, really, at this table very, very often for the gaffes.” Moderator Whoopi Goldberg replied, “I think Joe has gotten a pass at this table because, at least a couple of us, actually know, know, know him.” 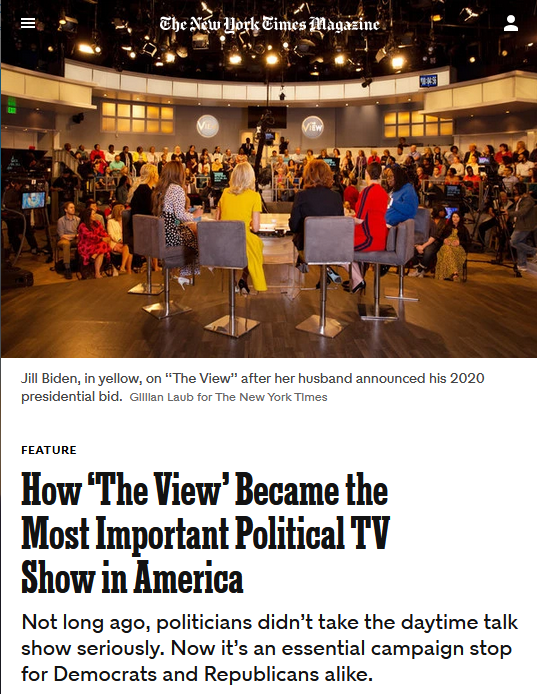 The New York Times (5/22/19) described "The View" as “a place where Democrats and Republicans alike go to introduce themselves to a national audience.”

"The View’s" name conveys that the show is meant to showcase a range of perspectives from a diverse cross-section of women, but in practice their views often converge on the Washington consensus. Conceived by pioneering journalist Barbara Walters (a regular dinner party host of Henry Kissinger, and professional reference for an aide to Syria’s Bashar al-Assad) as a “dessert” after decades as a globe-trotting interviewer, "The View" has undergone a radical change from its interviews with soap stars, and episodes with names like “Hip, Fun and Fashionable Mall Clothing/How to Avoid Spreading Germs,” to now leading an episode with a national security adviser’s resignation and a co-host labeling Brazil’s president a fascist.

With about 3 million daily viewers, about as many as Fox News star Tucker Carlson garners each night, "The View" has become what the New York Times (5/22/19) has called “the most important political TV show in America.” A must-stop for candidates running and politicians rising, its influence extends far past its single hour each weekday. The show’s hosts, past and present, have jumped to lofty media perches like NBC‘s "Today" (Meredith Vieira), "Fox & Friends" — in effect, the new presidential daily briefing (Elisabeth Hasselbeck) — CNN (Sunny Hostin and Lisa Ling). and MSNBC (Nicole Wallace). ABC in particular uses the show as a source of talent, finding homes for hosts at "This Week" (Meghan McCain), "Good Morning America" (Sara Haines) and "Good Morning America Weekend" (Paula Faris).

Despite its wide influence on news and politics, "The View" is still treated with condescension: when Bill Maher said recently that he never misses an episode of the daytime staple, his liberal audience laughed.

"The View" is not without its capacity to surprise, quoting Colin Kaepernick’s reference to Robert L. Allen’s "Black Awakening in Capitalist America," and using Black History Month, LGBTQ Pride Month and Hispanic Heritage Month to celebrate overlooked contributions to American life, and introduce the life stories of people like Sylvia Rivera and Robert Smalls to a daytime audience. At its table, "The View" has had discussions about police violence, sexual violence, sexism and racism. The show featured 9/11 first responders’ fight for health care years before Jon Stewart championed the cause on air, and its hosts have championed the importance of unions.

Nearly a decade before the New York Times debated using the word “lie” in its pages, Joy Behar (9/12/08) called John McCain’s negative ads against Barack Obama “lies” — to the GOP presidential candidate’s face, an appearance that Cindy McCain said “picked our bones clean.” (That was long before McCain’s daughter became one of the panelists on the show, of course.) "The View" also gave Starbucks CEO Howard Schultz a thorough grilling on his vapid run (1/30/19) that repelled his attempts at both-sides-ism, its knowing audience laughing at Schultz’s insistence that “you can’t buy the presidency.”

But it also introduced into daytime talk the 2008 controversy about Barack Obama’s relationship with former Weather Underground member Bill Ayers, before Glenn Beck even had a Fox News contract. They allowed Alan Dershowitz to filibuster against his alleged sex abuse victim, indulged in Russiagate and facilitated the Ilhan Omar smear. When "The View" does a deep dive on issues in the news, the hosts turn to ABC News’ Jonathan Karl to provide impartial analysis, though Karl came up through the right-wing media ecosystem (Extra!, 7/11), and despite his more recent checkered record.

Following the third Democratic debate, Behar (9/13/19) dismissed differences between candidates of the center and of the left:

They’re all on the same page…. So you’re not just voting for a person, you’re voting for a party. I think people need to remember that. So that if you don’t love Joe Biden, remember if he can get elected, he will do the right thing.

But in fact, political figures to Biden’s left, like Bernie Sanders, Elizabeth Warren, Alexandria Ocasio-Cortez or Ilhan Omar, do not get the same treatment on "The View": They are seldom given passes, and are often met with a marked skepticism.

While the hosts largely believe that a 76-year-old creature of Washington can reunite the country and appeal to Trump voters, cold water is consistently thrown on any more progressive politicians. Speaking of Ocasio-Cortez, Behar (3/11/19) said, “Half the things she talks about are impossible to do, right now.” On who Ocasio-Cortez might endorse in the presidential race, Behar (6/17/19) said: “She wants a transformational presidential candidate. We would love that. I say, get somebody in there who can not AOC but W-I-N, OK? Win, and then we can worry about being transformational afterwards.” Or candidates get written out: “It’s a two-person race, Warren and Biden, period,” McCain (9/13/19), an ABC News contributor, said, which might come as news to residents of Iowa and New Hampshire, and donors in all 50 states. 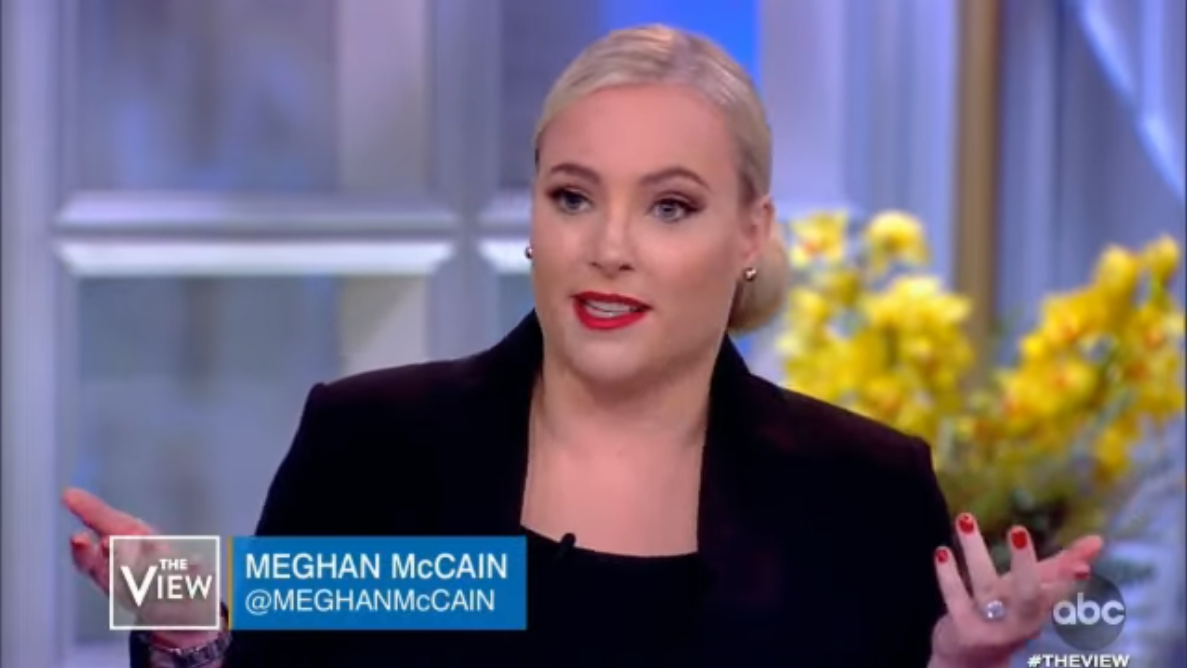 Meghan McCain ("The View," 9/13/19): “I hate ageism,” but “I thought Bernie Sanders was going to cough himself into a coma on the stage last night.”

After the hosts condemned Julián Castro’s contentious debate exchange with Biden as a “cringeworthy” display of “ageism,” and mere moments after herself declaring, “I hate ageism,” McCain (9/13/19) followed that up with, “I thought Bernie Sanders was going to cough himself into a coma on the stage last night, if you want to talk about somebody looking old.”

Or candidates get ignored after they leave the table: Three weeks after Sanders insisted on "The View" that he, like Andrew Yang and other candidates, supports taxing big tech companies like Amazon and Facebook, Goldberg (9/26/19) asked Yang:

Why do you think no one on either side, or in the middle, has embraced this idea that companies that make their bones in our country should help us participate in our growth?… Nobody’s saying, “That’s a great idea … and suddenly no one’s paying taxes but us?”

Challenging national security conventions does not go down well at the table, either: In 2011, when Michael Moore suggested that Osama bin Laden should receive a trial, in keeping with the tradition of Nuremberg, he received a chilly response, even from its nominal liberal panelists. And when Julian Assange was arrested, and McCain (4/11/19) railed that he was a “cyber terrorist,” the bipartisan Washington consensus was upheld by moderate, conservative and liberal panelists alike: Behar said that Assange had “hacked into the Democrats’ computers and helped Trump get elected, basically,” while Huntsman said, “There is a difference in being a whistleblower and a straight-up hacker.”

It took Hostin, a former federal prosecutor, to point out that if McCain had a problem with WikiLeaks, “then you need to have a problem with the Pentagon Papers, the Panama Papers, the Iraq and Afghanistan war logs being released.”

"The View" signs off each episode by reminding its audience, “Take a little time to enjoy the view.” It’s good advice, but they should think about broadening theirs.

Douglas Grant is a writer and researcher based in Brooklyn.