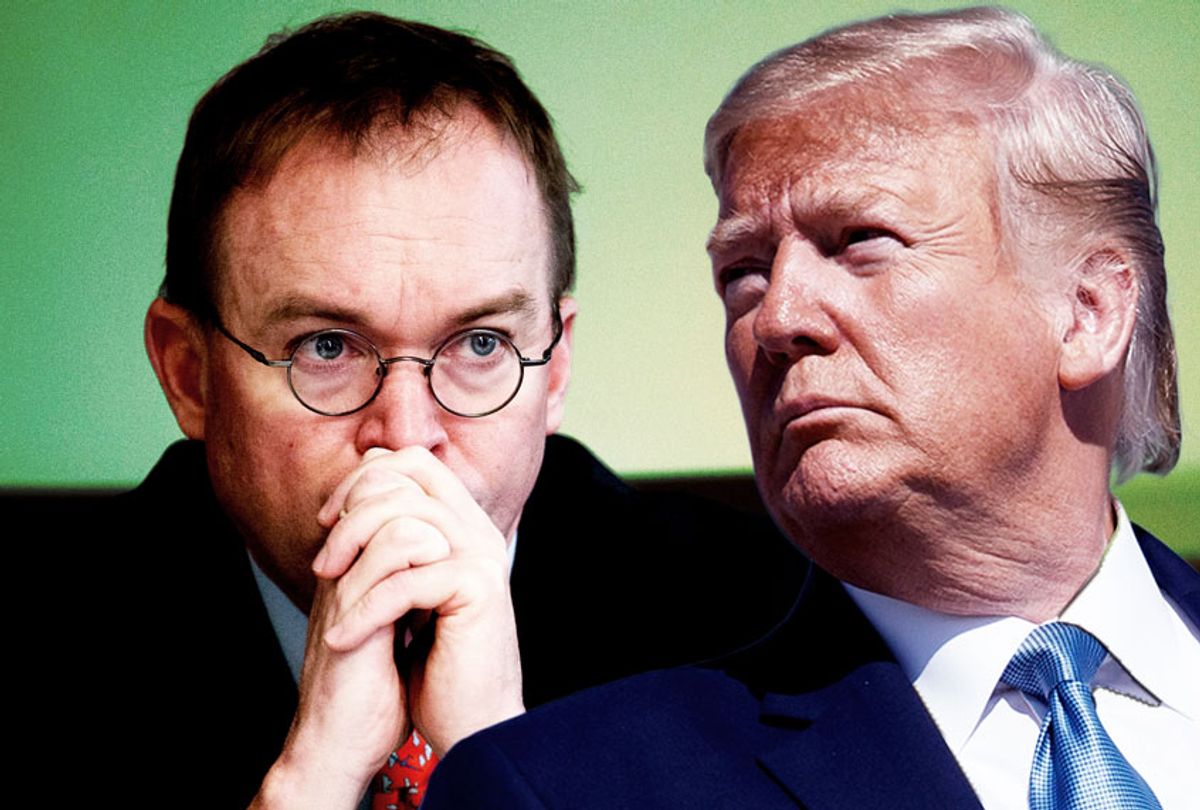 President Trump has claimed that he only blocked military aid to Ukraine in order to pressure that country to crack down on corruption. But his administration has repeatedly tried to slash billions from anti-corruption efforts in Ukraine and around the world.

The Trump administration has tried to frame the president’s pressure on Ukraine to investigate the Bidens and the 2016 election as an anti-corruption effort. Acting chief of staff Mick Mulvaney told Fox News on Sunday that the primary reason the administration held up nearly $400 million in military aid “was the rampant corruption in Ukraine.” Trump similarly defended his July 25 phone call with Ukrainian President Volodymyr Zelensky by insisting he was only concerned about corruption in the country.

“It's very important to talk about corruption. If you don't talk about corruption, why would you give money to a country that you think is corrupt?" Trump told reporters last month, before adding, “what Biden did was wrong.” There is in fact no evidence that former Vice President Joe Biden or his son Hunter did anything illegal in Ukraine.

If stamping out corruption in Ukraine was an administration priority, the administration’s budget office did not get the memo. Trump’s annual budget requests to Congress have repeatedly sought steep cuts to anti-corruption efforts in Ukraine and other countries.

The Trump administration has sought to cut the International Narcotics Control and Law Enforcement program, whose goals include “helping U.S. partners address threats to U.S. interests by building resilience and promoting reform in the justice and law enforcement sectors through support to new institutions and specialized offices, such as Ukraine’s National Anti-Corruption Bureau and Special Anti-Corruption Prosecutor’s Office,” according to White House budget documents obtained by The Washington Post.

Trump tried to slash the program’s funding to Ukraine to $13 million, but the idea was rejected by Congress, which approved $30 million, according to The Post. Trump’s 2020 budget proposal includes a similar cut, though lawmakers are unlikely to go along.

The administration also sought to cut more than $2 billion from the Economic Support and Development Fund, which aims to tackle overseas corruption, among other things. The administration specifically sought to slash the program’s funds for Ukraine from $250 million to $145 million.

The White House told The Post that the cuts to anti-corruption programs were a byproduct of Trump’s aim to slash spending overseas, not a targeted effort.

“The president has consistently sought across-the-board cuts to foreign aid, and has proposed more cuts in his budgets than any other president in history,” said Rachael Semmel, a spokeswoman for the Office of Management and Budget. “He has also strongly encouraged other countries to contribute their own efforts and resources to their defense and reform efforts.”

The repeated attempts to slash anti-corruption funding, and funding for Ukraine in particular, stand in stark contrast to Trump’s self-professed concern about corruption in that country.

Anti-corruption advocates said that claim is contradicted by his own policies.

"That just doesn't comport with anything that's gone before in his administration," Alexandra Wrage, the president of anti-bribery group TRACE, told NPR. "To claim that this is springing from some heartfelt concern about international corruption just doesn't hold water."

Among Trump’s first moves in office was to squash transparency efforts aimed at international oil and gas companies. The administration has also limited the enforcement of the Foreign Corrupt Practices Act, which prohibits companies from paying bribes to foreign officials, The New York Law Journal reported.

"It's ironic to hear President Trump talk about his work fighting against corruption, because he essentially shut down these very clear-cut initiatives that have been endorsed the world over, that are not radical by any stretch of the imagination," Oxfam America’s Isabel Munilla told NPR.

With Trump facing his own allegations of corruption for mixing his presidency with his personal financial interests, experts say it isn’t just his policies that send the message that the United States is no longer interested in policing corruption.

"The president's willingness to do this, plus the United States public's willingness to tolerate this, is the greatest harm that's coming out of this administration," Andy Spalding, a University of Richmond professor who specializes in international anti-corruption law, told NPR. "That's the loudest and clearest signal that we're sending to the world right now."