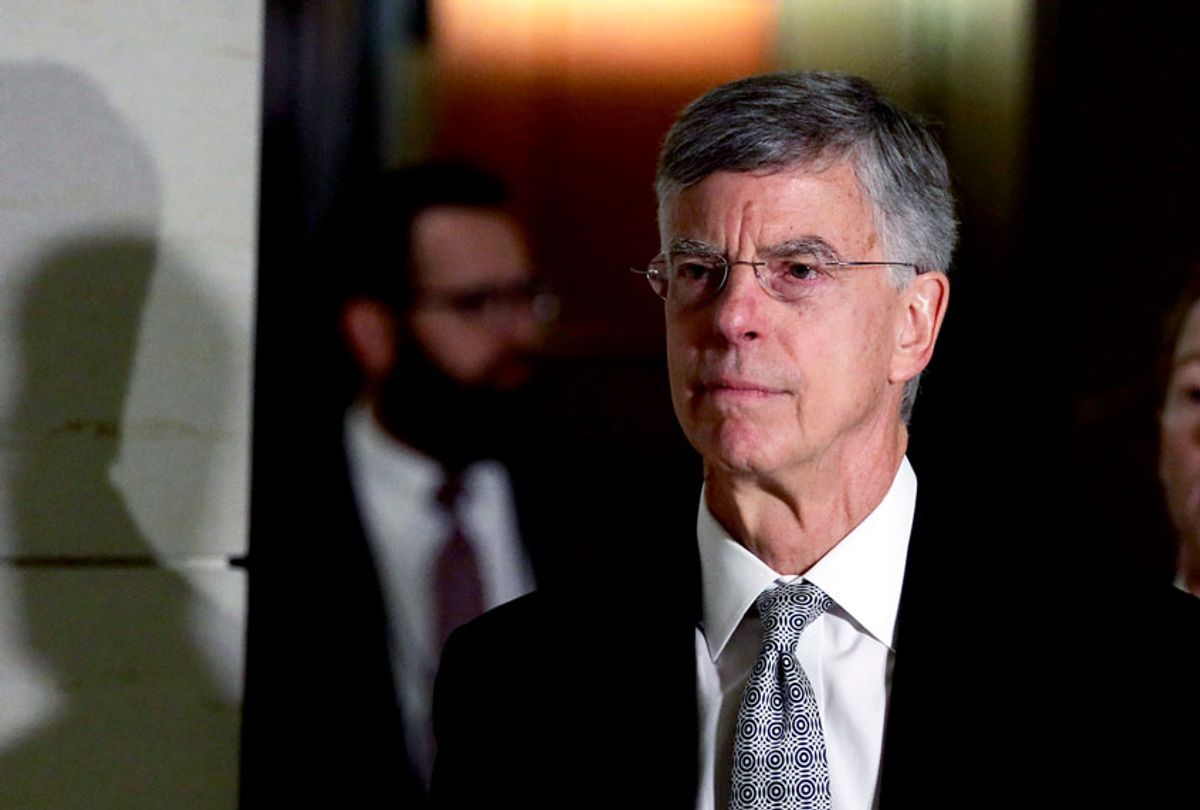 Bill Taylor, the top U.S. diplomat to Ukraine, arrives at a closed session before the House Intelligence, Foreign Affairs and Oversight committees October 22, 2019 at the U.S. Capitol in Washington, DC. Taylor was on Capitol Hill to testify to the committees for the ongoing impeachment inquiry against President Donald Trump. (Photo by Alex Wong/Getty Images)
--

The White House accused a longtime State Department official who testified to Congress on Tuesday that military aid to Ukraine was contingent on President Donald Trump’s demand for an investigation into the Bidens of being part of a "coordinated smear campaign."

“President Trump has done nothing wrong. This is a coordinated smear campaign from far-left lawmakers and radical unelected bureaucrats waging war on the Constitution,” Grisham claimed, adding that “there was no quid pro quo” despite acting chief of staff Mick Mulvaney’s admission last week that there was. (He has subsequently attempted to walk his comments back).

Taylor, a career diplomat, became Trump’s envoy to Ukraine after Marie Yovanovitch, the previous ambassador, was ousted following what she described as a smear campaign led by Rudy Giuliani, the president's personal attorney. Taylor, 72, was described by colleagues as a “model” diplomat to the New York Times. Taylor is among the most experienced diplomats, having served in every administration of both parties since 1985.

Democrats in the room for Taylor’s testimony, which the State Department tried to block, described his account as “damning,” “troubling” and “explosive.” CBS News reported that there were “gasps” from both sides of the aisle during his hour-long opening statement.

Taylor told a congressional panel during a private session that despite administration denials, Trump had indeed demanded a quid pro quo in exchange for U.S. military aid. Taylor claimed that he was told by Gordon Sondland, the U.S. ambassador to the European Union, that Trump wanted Ukrainian President Volodymyr Zelensky to investigate what he believed was Ukrainian interference in the 2016 election and also to investigate Burisma, the Ukrainian energy company where Hunter Biden was a board member, according to The Washington Post.

“By mid-July it was becoming clear to me that the meeting President Zelensky wanted was conditioned on the investigations of Burisma and alleged Ukrainian interference in the 2016 U.S. elections,” Taylor said in his opening statement. Hunter Biden sat on the board of Burisma, though former Ukrainian prosecutors who reviewed the case said there was no evidence he or his father did anything illegal.

“It was also clear that this condition was driven by the irregular policy channel I had come to understand was guided by Mr. Giuliani,” Taylor said. He later added that Gordon Sondland, the U.S. ambassador to the European Union, initially told him that the Oval Office meeting was contingent on the announcement but later admitted that “everything was dependent on such an announcement, including security assistance.”

“He said that President Trump wanted President Zelensky ‘in a public box’ by making a public statement about ordering such investigations,” Taylor testified.

Taylor also described an “unusual” arrangement in which Giuliani, Sondland, then-Special Envoy Kurt Volker and Energy Secretary Rick Perry ran a “highly irregular” second foreign policy channel in Ukraine. Though he initially thought the other officials’ goal was a “strong US-Ukraine partnership,” Taylor said “it became clear to me by August that the channels had diverged in their objectives. As this occurred, I became increasingly concerned.”

Volker provided text messages to Congress showing that Taylor called it “crazy to withhold security assistance for help with a political campaign” at the time.

Taylor testified that prior to the text messages, Sondland told him that Trump “is a businessman.”

“When a businessman is about to sign a check to someone who owes him something, he said, the businessman asks that person to pay up before signing the check,” Taylor said. “Ambassador Volker used the same terms several days later . . . I argued to both that the explanation made no sense: the Ukrainians did not ‘owe’ President Trump anything, and holding up security assistance for domestic political gain was ‘crazy.’”

Taylor revealed that the political impropriety was only one of his concerns. “More Ukrainians would undoubtedly die without the U.S. assistance,” he said.

Taylor was not the only one in the administration disturbed by the scheme. Then-national security adviser John Bolton instructed National Security Council official Fiona Hill to “brief the lawyers” on the plot to link the aid to the investigations, describing it as a “drug deal” that “would be a disaster,” according to Taylor.

Trump attempted to defend himself Wednesday by tweeting a quote from Rep. John Ratcliffe, R-Tex., who alleged on Fox News that Taylor and other witnesses had not provided any “testimony that the Ukrainians were aware that military aid was being withheld.”

“The Do Nothing Dems case is DEAD!” Trump declared.

However, that is not true. Taylor testified that he was told by National Security Council aide Tim Morrison that Sondland had explicitly told Zelensky aide Andriy Yermak that military aid would be blocked until Ukraine agreed to the administration’s demands.

Sen. Ron Johnson, R-Wis, previously said as much to the Milwaukee Journal-Sentinel, recalling that Trump personally made it clear to him as well that the aid was contingent on the investigations.

“But the president was very consistent on why he was considering [holding up the aid]," Johnson said. “Again, it was corruption, overall, generalized — but yeah, no doubt about it, what happened in 2016 — what happened in 2016, as relates? What was the truth about that?”

After Taylor’s testimony, Democrats said that they could bring Sondland back to clarify some of his statements, which were contradicted by Taylor.

“I recall no discussions with any State Department or White House official about former Vice President Biden or his son, nor do I recall taking part in any effort to encourage an investigation into the Bidens,” Sondland testified last week.

“We will probably give Mr. Sondland the chance to come back and re-state,” Rep. Lacy Clay, D-Mo., told Bloomberg.

Democrats walked away from Taylor’s nine-hour testimony believing it was a game-changer in the impeachment inquiry.

Rep. Debbie Wasserman Schultz, D-Fla., told NBC News that “I do not know how you would listen to today's testimony by Ambassador Taylor and draw any other conclusion except that the president abused his power.”