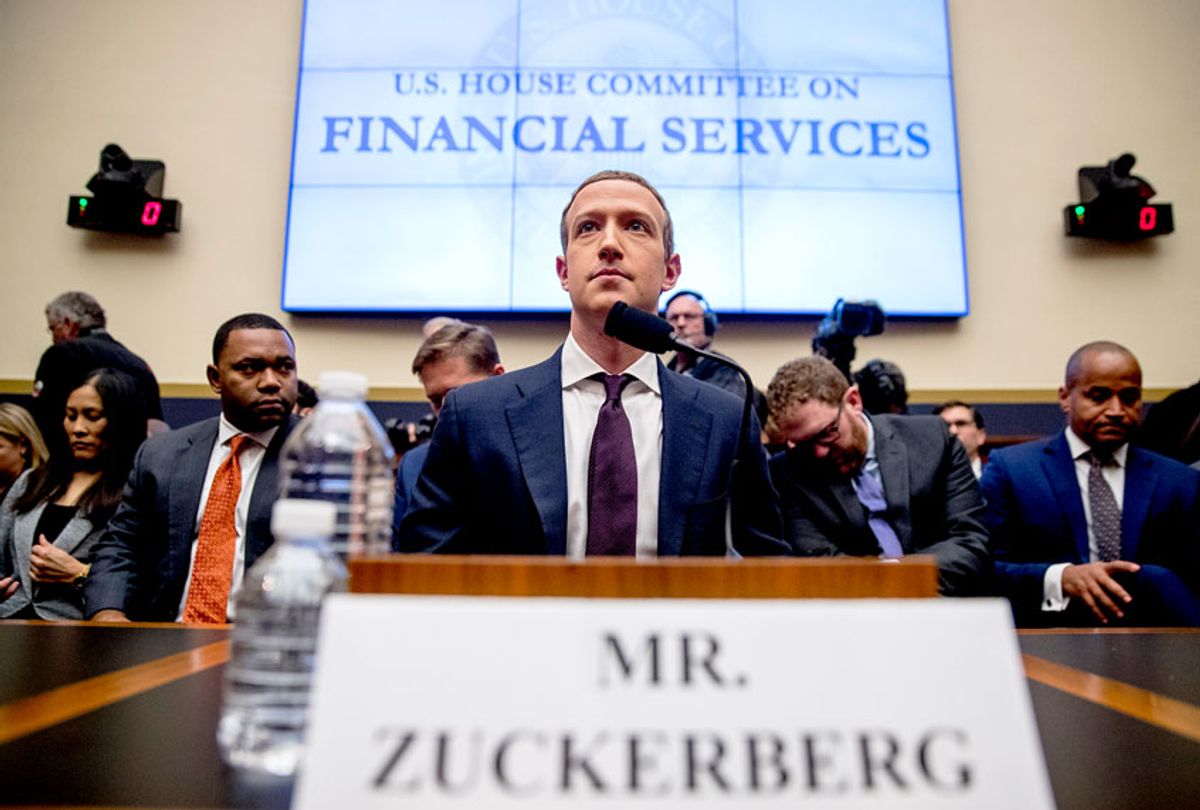 Facebook founder and chief executive Mark Zuckerberg faced lawmakers on Capitol Hill Wednesday in a hearing about the company’s new cryptocurrency Libra, but Democrats were interested in a lot more beyond Facebook’s new offering.

Democrats on the House Financial Services Committee repeatedly grilled Zuckerberg on Facebook’s controversial decision to not apply its fact-checking to political ads, which lawmakers warned could impact the upcoming elections.

Rep. Maxine Waters, D-Calif., the chairwoman of the committee, questioned why Facebook “gives politicians a license to lie.”

"Despite all of your technological expertise, Russia and Iran are at it again for the upcoming elections," Waters said. "Are you telling me . . . You plan on doing no fact-checking on political ads?”

"Our policy is that we do not fact check politician's speech . . . We believe that, in a democracy, it is important that people can see for themselves what politicians are saying," Zuckerberg said. "From a business perspective, the very small percent of our business that is made up of political ads does not come anywhere close to justifying the controversy that this incurs for our company. This really is not about money."

“You announced recently that the official policy of Facebook now allows politicians to pay to spread disinformation in 2020 elections and in the future,” Ocasio-Cortez told Zuckerberg before questioning him on what is and is not permissible under the company’s guidelines.

“If anyone, including a politician, is saying things that can cause . . . that is calling for violence, or could risk imminent physical harm, or voter or census suppression — when we roll out the census suppression policy — we will take that content down," Zuckerberg said.

“So there is some threshold where you will fact-check political advertisements. Is that what you’re telling me?” Ocasio-Cortez asked. “Would I be able to run advertisements on Facebook targeting Republicans in primaries saying that they voted for the Green New Deal?”

“Congresswoman, I don’t know the answer to that off the top of my head,” Zuckerberg replied. "I think, probably."

“Do you see a potential problem here with a complete lack of fact-checking on political advertisements?” Ocasio-Cortez pressed.

“Well, congresswoman, I think lying is bad. And I think if you were to run an ad that had a lie in it, that would be bad,” he replied. “That’s different from it being . . . in our position, the right thing to do to prevent your constituents or people in an election from seeing that you had lied.”

“We actually don’t appoint the independent fact-checkers,” Zuckerberg responded. “They go through an independent organization, called the Independent Fact-Checking Network, that has a rigorous standard for who they allow to serve as a fact-checker.”

“So you would say that white supremacist-tied publications meet a rigorous standard for fact-checking?” Ocasio-Cortez asked.

“The International Fact-Checking Network is the one who is setting that standard,” he replied.

Rep. Katie Porter, D-Calif., took a different approach, grilling Zuckerberg over the company’s treatment of the contracted workers it uses as fact-checkers.

"You've got about 15,000 contractors watching murders, stabbings, suicides, other gruesome, disgusting videos, for content moderation,” Porter said. “According to one report . . . these workers get nine minutes of supervised wellness time per day. That means nine minutes to cry in the stairwell while someone watches them."

"Would you be willing to commit to spending one hour per day for the next year watching these videos, and acting as a content monitor and only accessing the same benefits available to your workers?" she asked.

Zuckerberg began to note the “good benefits” the contractors receive before Porter cut him off to demanded a “yes or no” answer.

"I'm not sure that it would best serve our community for me to spend that much time," he said.

Other members of the committee questioned Zuckerberg about Facebook’s policies on hate speech.

After describing the ease with which hate groups can use Facebook to organize and how hate speech leads to violence, Rep. Rashida Tlaib, D-Mich., asked, "Why haven't you stopped hate groups from using your events page? And are you endorsing these groups by leaving their events page up?"

"This is an area that I think is very important and that I take very seriously,” Zuckerberg replied, but claimed "it's very hard to police every instance of this, and a lot of the content in the stories that you are talking about I would personally condemn."

"But Mr. Zuckerberg, it is hate speech," Tlaib said. "It is hate, and it's leading to violence and death threats in my office. It's untruthful . . . It's a pretty dark time in our country, and we need to be able to play a part in reducing that violence."

Rep. Joyce Beatty, D-Ohio, told Zuckerberg that his company’s approach to civil rights and diversity was “appalling and disgusting.” If Facebook had more diversity, she said, they could have avoided a lawsuit by the Department of Housing and Urban Development for allowing realtors to use their ad system to exclude people of certain races, gender, or background from their housing ads.

"You should have known better, and maybe if you had real diversity or inclusion on your team, somebody in that room would have said when you looked at what you were doing in the housing, how you are red lining or using zip codes to eliminate people from getting information," Beatty said.

“What's so frustrating to me — it's like you think it's a joke, when you have ruined the lives of many people, discriminated against them,” Beatty said. "Maybe you just don't read a lot of things that have to do with civil rights or African-Americans. I have a lot of questions that I'm going to send to you that I'm not going to be able to get through. And I would like an answer, because this is appalling and disgusting to me."