Gabbard has denied plans for a third party bid, but her recent moves have only added fuel to the speculative fire 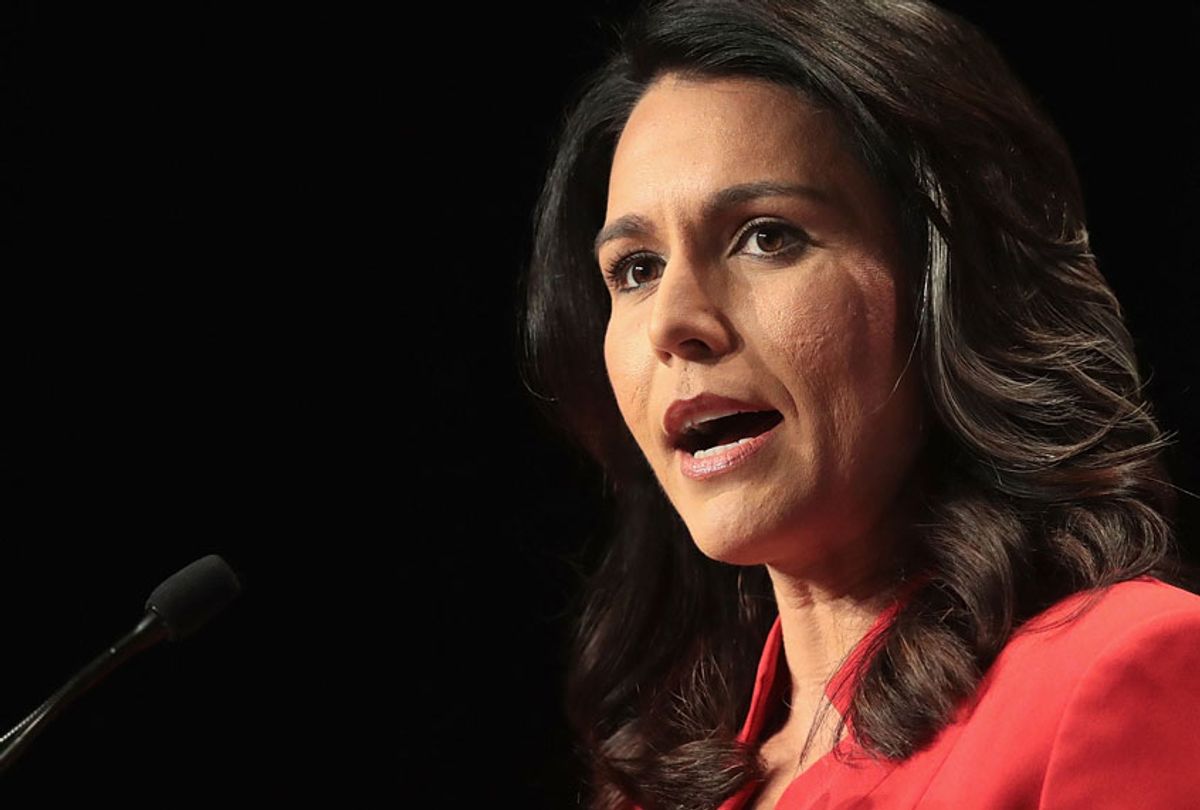 Hawaii Rep. Tulsi Gabbard announced on Friday that she would not seek re-election to Congress in order to focus on her bid for the Democratic presidential nomination.

Gabbard, an Iraq War veteran who was first elected to Congress in 2012, thanked her constituents as she vowed to serve Hawaii from the Oval Office.

“I'm fully committed to my offer to serve you, the people of Hawaii & America, as your President & Commander-in-Chief,” Gabbard wrote on Twitter. “So I will not be seeking reelection to Congress in 2020. I humbly ask for your support for my candidacy for President of the United States.”

The Hawaii congresswoman faced a tough primary challenge back home as she pursues the Democratic presidential nomination. Hawaii state Sen. Kai Kahele has so far raised more than $345,000 in his attempt to unseat Gabbard, according to the Center for Responsive Politics — more than the $221,501 Gabbard has raised for her presidential campaign from Hawaii residents.

Gabbard's House re-election campaign stalled, raising negative $20 in the second quarter. And a recent Hawaii poll found that half of her constituents preferred someone else to fill her seat.

Though Gabbard’s decision makes sense given her fundraising and polling disadvantage, some Democrats cited the move as evidence that she may launch a third-party presidential run after former Secretary of State Hillary Clinton predicted as much in an interview last week.

In an interview with former Obama campaign manager David Plouffe, Clinton claimed that Gabbard was a “favorite of the Russians” and predicted that she was being “groomed” for a third-party run. Clinton said she believed Gabbard may play the same role as 2016 Green Party nominee Jill Stein, whom Clinton labeled a “Russian asset.”

Gabbard fired back, calling Clinton the “queen of warmongers” and the “embodiment of corruption.” Gabbard earlier this year ruled out a third-party run and hit out at “smears” by media outlets, who labeled her an “asset of Russia” in the last Democratic debate.

But her denials have done little to quench speculation that Gabbard, who is polling at just 1 percent nationally and 2 percent in Iowa and is not likely to qualify for the next Democratic debate, could continue her presidential bid past the Democratic primaries.

In fact, Gabbard’s recent moves have only added fuel to the speculative fire.

Gabbard met with about two dozen Wall Street executives for a private off-the-record meeting at a New York restaurant owned by former White House communications director Anthony Scaramucci this week, Fox Business reported. The event was hosted by Robert Wolf, a prominent Wall Street Democrat who previously headed up U.S. operations at the Swiss bank UBS. The network reported that Gabbard was “given a hero’s welcome” at the event, causing consternation among Democrats.

"The person who benefited from this meeting is Donald Trump," Democratic strategist David Brand told the outlet. "She's going nowhere in the Democratic Primary — now these guys are positioning her to hurt our nominee."

Gabbard echoed Matt Gaetz, R-Fla., who led a Republican group that stormed a secure Capitol Hill facility where the impeachment interviews are taking place to protest the secrecy of the proceedings.

“I don't know what's going on in those closed doors,” Gabbard told Hannity. “We, as members of Congress, do not have access to the information that's being shared. I think the American people deserve to know exactly what the facts are — what the evidence is being presented as this inquiry goes on.”

Gabbard said she worried the impeachment inquiry would “tear apart” the country, despite her own previous backing of the effort.

“I've long expressed my concern about going through impeachment proceedings in a very, very partisan way," she said, "because it will only further tear apart an already divided country."

“Tulsi Gabbard is not running for re-election. And she’s clearly not trying to win the Democratic nomination for president by going on Fox News every night to attack Democrats,” he tweeted. “So what, exactly, is she running for?”

It is not the first time Gabbard sparked ire from some in her own party. Gabbard endorsed Sen. Bernie Sanders, I-Vt., in 2016 and quit as vice-chair of the Democratic National Committee in protest of the party’s debate schedule. She similarly alleged that the primaries were “rigged” earlier this year.

Despite her past support of Sanders and progressive policies, Gabbard has drawn favor from the right thanks to her criticism of Clinton, opposition to military involvement overseas and support for the Second Amendment.

But it is not just Hillary Clinton and centrist Democrats who think Gabbard may launch a third-party bid. Bill Mitchell, a Trump sycophant and conservative radio host, bragged on Twitter that “odds of her going 3rd party and splitting the Democrat vote just went up exponentially.” Max Boot, an anti-Trump conservative columnist, predicted that “Tulsi [is] probably gearing up for third party bid to help re-elect Trump. Bad.”

Gabbard, for what it is worth, ruled out a third-party bid in August.

“I've ruled that out,” she told CNN. “I’m going to continue to focus on moving our campaign forward, continuing this grassroots campaign, continuing to deliver our message to the American people.”